Sodium + chlorine = your favorite popcorn condiment (and lots of smoke and fire!)

See the video at the bottom of the page for a behind-the-scenes look at PopSci’s fiery photo shoot. For excerpts from the shoot, click here

Sodium is a soft, silvery metal that explodes violently on contact with water and burns skin by reacting with even the slightest moisture. Chlorine is a choking yellow gas, used with mixed success in the trenches of World War I (it was known to have killed about equal numbers on both sides of the trench). When these chemicals meet, they react in a fierce ball of spitting fire and clouds of white smoke. The smoke is sodium chloride (NaCl), or table salt, which I used to season a basket of popcorn I hung over the reaction.

In the periodic table, as in politics, the unstable elements tend to hang out at the far left and the far right. Sodium is a loose-electron element from the first column (left side) of the table; its extra electron makes it unstable. On the other side of the table is chlorine, an equally volatile one-electron-short-of-a-full-deck element from the far-right 17th column. By transferring sodium´s excess electron to chorine´s nearly full shell, the elements reach a stable configuration in NaCl. Salt doesn´t burn your skin or choke your lungs because, by combining with each other, both elements have scratched their itch.

As a way of salting popcorn, though, this kind of salt synthesis is pretty out there. The salt is very fresh, but the hazards of blowing pure chlorine into a bowl of liquid sodium are very real. Seconds after this picture was taken, the net melted, dropping popcorn into the bowl and sending a shower of flaming liquid sodium balls in all directions [see video below and the image gallery here]. No one was hurt because I´d made safety preparations for even the worst-case scenario, which this nearly was-only an uncontrolled chlorine leak would have been worse, in which case I had a clear path to run like hell.

Achtung! Theodore Gray is trained in lab safety. Don’t try this at home. Find more on Gray’s experiments at periodictabletable.com 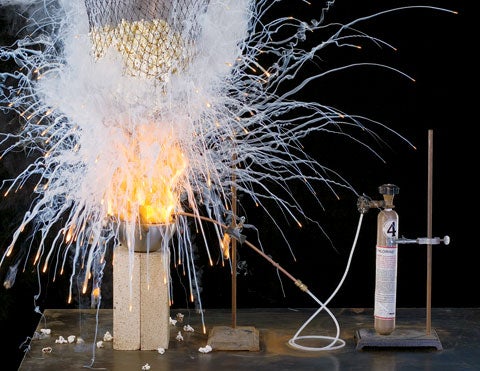 This is where things get tricky: The fire actually melted the net, and popcorn dropping into the bowl send balls of flaming sodium flying around in all directions. 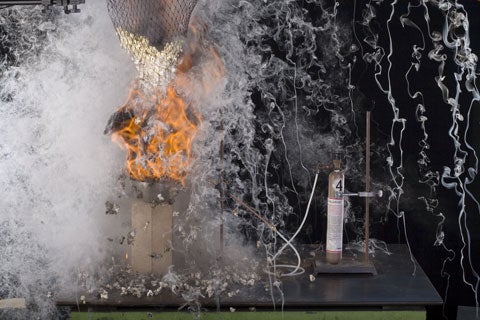 (The mission was to make something explode, right?) 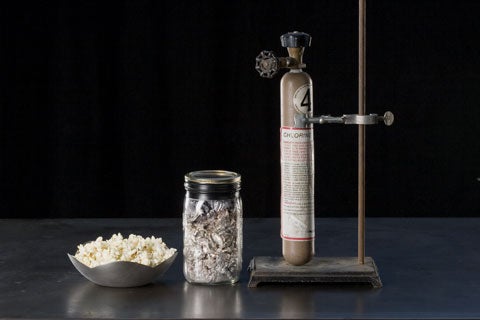 Sodium stored under inert gas in a canning jar, a cylinder of liquefied chlorine gas, and a bowl of popcorn 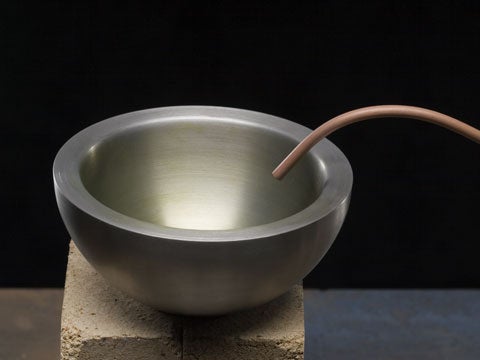 In mere moments, this bowl will hold liquid sodium, into which we´ll blow pure chlorine gas. Don´t try this at home, kids. 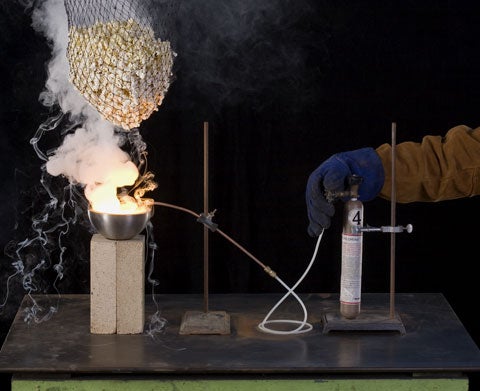 Plumes of fresh-salt smoke waft up to the net full of popcorn. 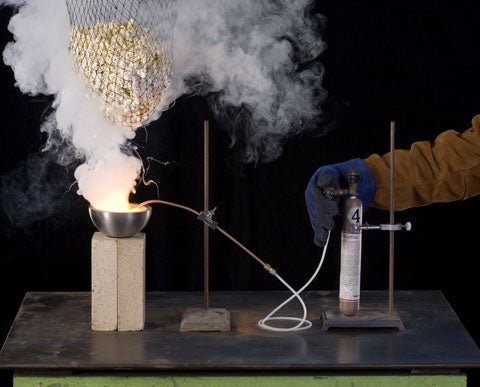 Theo regulates the amount of chlorine gas blowing into the bowl. An accident here could be fatal: remember that this is a gas used as a chemical weapon. 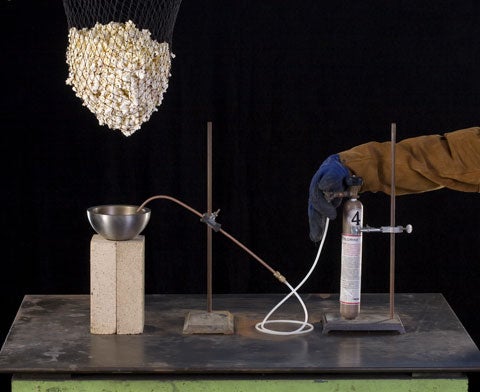 A net filled with popcorn is suspended over the bowl where the sodium and chlorine will go. Not the easiest way to salt your popcorn, but we like a good adventure. Note the flame retardant materials: stone table, cinderblock stand for the bowl, and most importantly, protective clothing.
chemistry
chlorine
DIY
gray
salts