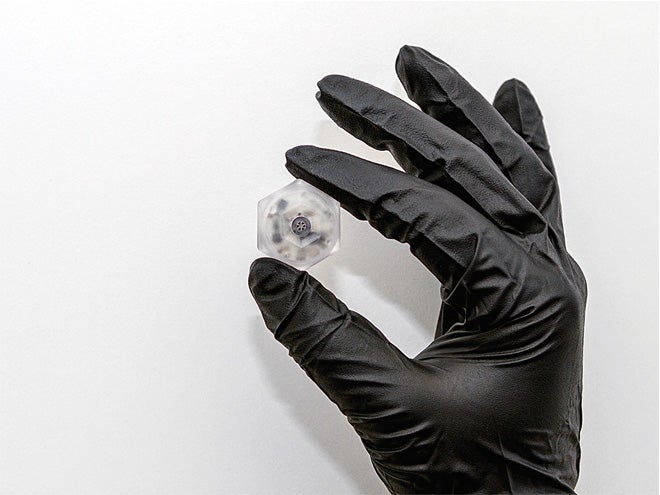 Most object trackers can help you find something you've already lost. The Sensor-1 lets you know when you're about to lose it. Armed with an accelerometer, gyroscope, and magnetometer, the quarter-size device alerts you to your gadget's slightest movement. Connected to a phone or other device via Bluetooth, the trackers can catch snooping houseguests or stop laptop thieves while you're getting a latte. $79. Courtesy Metasensor
SHARE

At the new T-Mobile Arena in Las Vegas, they’re eliminating your need to track down that one bartender way in back who you know makes good drinks. Nearly every hot dog station and drink stand in the 20,000-person arena serves strong cocktails made with fresh cold-pressed juice, poured through an enormous custom-designed draft system.

At arena scale, cocktail are typically made in a rush with heat-pasteurized mixers squirted from the soda “gun,” or sometimes poured from kegs containing pre-mixed fast-spoiling fresh ingredients, but this new system, created by a company called RIPE Bar Juice tidily straddles the line between fast and fresh. At a facility in New Haven, Connecticut, freshly-squeezed juices, agave syrup sweetener, and other ingredients are mixed, put into 5-gallon bags, and sent through a high-pressure processing (HPP) machine that looks sort of like a flume ride into an MRI.

The HPP machine places the liquids under 87,000 psi of pressure for about two minutes (depending on the pH of the juice mix) to squish the insides of any bacteria into oblivion. It’s not pasteurization, which is done with heat, but another form of preservation that keeps juices tasting fresh longer. The juice can then last, under refrigeration in the bag without oxygen, for 90 days, as opposed to two to four days with standard juice. (The technology is also used on foods like deli meats.) After being shipped in a refrigerated truck to Vegas, the bags of mixer work like the bagged cola syrup used in fast-food soda fountains), but instead of soda water, the other part is delicious liquor.

The BIB and the alcohol are kept in separate containers and mixed at a specific ratio with a valve (that can be adjusted for different cocktails) as it heads into the PVC lines that lead to the tap handles.

Because the juice is not shelf-stable, containers are kept either in a big rack inside walk-in refrigerators with “long–draw” tubes going out to the bars throughout the arena, averaging about 150 feet in length, or in self-contained refrigerated mobile units that line the hallways. The mobile refrigerated units are designed to withstand the sun of Vegas pool parties and ocean spray of cruise ship decks. The long-draw tubes are refrigerated the whole way with glycol coolant so that the juice stays cold and doesn’t spoil. All of the faucets are made from 304 stainless steel so the high acidity of the drinks doesn’t cause unwanted chemical reactions.

The arena’s signature drink, the Atomic Fizz, is made with prickly pear juice, lemon juice, and agave syrup (squeezed and mixed in Connecticut), plus lemon-flavored vodka and Aperol–and the cocktail comes in the signature magenta of T-Mobile, the arena sponsor. The bartenders need only to pull the handle to pour a cocktail, add a splash of soda to each for the personal touch, and switch out the bags every 150 drinks when they run empty. It takes about five seconds to make each drink, so by far the slowest part of getting a cocktail at halftime is waiting for your credit card to run.