There’s an inescapable showmanship inherent in pouring liquid nitrogen into a champagne flute while a cloud of vapor billows from... 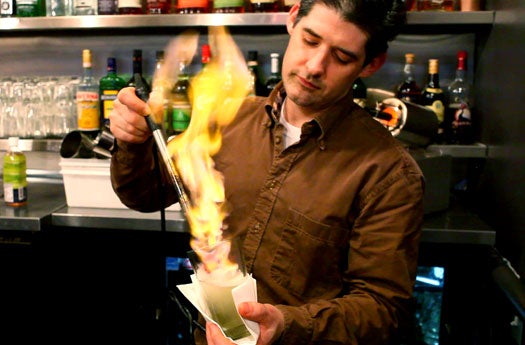 There’s an inescapable showmanship inherent in pouring liquid nitrogen into a champagne flute while a cloud of vapor billows from the -321°F fluid and puffs across the bar. But the show isn’t the point at Booker & Dax, a brand-new New York cocktail bar in the back of David Chang’s much-loved Momofuku Ssäm Bar, where supercold nitrogen, a laboratory centrifuge, and the like are used primarily to make drinks more delicious, and secondarily to create and serve them more efficiently. Only as an occasional side effect does a swell of fog or ceiling-high gout of flame provide entertainment to a customer.

Take the Gin and Juice. At one million bars around the world, you can have a bartender combine grapefruit juice, gin, and a splash of soda over ice, using basically the same technique that’s worked ever since humans first mixed one liquid with another. Booker & Dax, though, under the drinksmanship of friend-of-PopSci Dave Arnold, takes a more streamlined approach. Freshly squeezed grapefruit juice is clarified, using pectinase enzyme and a pair of chemical clearing agents borrowed from the wine industry, chitosan and kieselsol, in conjunction with a fast ride in the bar’s centrifuge. The opaque solids fall to the bottom, and the result is a pale liquid as clear as white wine.

Behind the scenes, the staff (or yours truly if they need an extra hand) mixes the juice with gin, sugar, and a precise weight of crushed ice or plain water, to bring it to the precise desired alcoholic strength and chilly temperature. The complete beverage is then bottled in liter bottles, carbonated at the bar’s CO2 hose, and kept chilled until it’s served.

When you sit at the bar and order a Gin & Juice, the bartender sets a champagne flute on the bar and swirls a splash of liquid nitrogen into it, bringing the glass down to delicious subzero temperatures amid the aforementioned dramatic puff of vapor. Then, with the nitro boiled off, the ice-cold carbonated cocktail is poured from the liter bottle into the glass and graciously served.

Back in 1700 or thereabouts, if you wanted a hot drink, you asked your tavernkeeper to mix it up in a mug and then thrust a red-hot poker into it. The method lacked a bit of subtlety, though, and between that and the fact that modern bars rarely have blazing fires with iron pokers in them, that method of heating drinks has fallen out of fashion. Which is a shame, Dave Arnold points out, because it did more for the drink than merely making it warm — it caramelizes sugars and ignites alcohol vapors, changing the flavor of a beverage significantly. Your winter hot toddy gets its warmth from boiling water, which does the basic job, but has no flavor-enhancing effects.

So Dave has brought back the poker. His is made from a high-temperature industrial heating rod, which is cranked up to some 1500°F with electrical resistance. It sits in a handy holster behind the bar, and then, when a customer at Booker & Dax orders a hot drink, the bartender grabs the poker’s handle and plunges it into a glass of liquor. The result: instant boiling, flames flaring from the surface of the alcohol, and a caramely odor filling the air. Then the piping-hot drink is served, transformed by ages-old technology made new.

This video shows the Fire-Breathing Dragon, a concoction of centrifuge-clarified orange juice, tea, and rum, invented by Dave in honor of the lunar new year.

Booker & Dax is in the old Milk Bar location at the back of Momofuku Ssäm Bar, at 207 Second Avenue in Manhattan.