Using ‘Doom’ To Design A Room

The program for a classic demon-slaying game is helping construction companies design hospitals and office buildings. 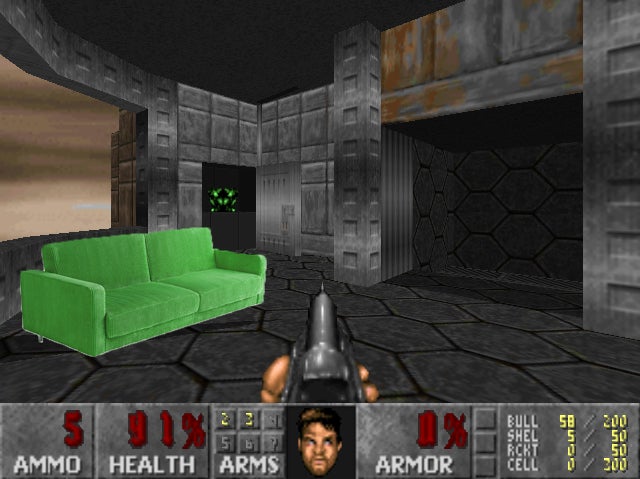 Note: There are no actual couches in Doom ... as far as we know. Wikimedia Commons/Photoshop By Popular Science
SHARE

Remember that early ’90s horror-themed video game, Doom, where you roamed around a Martian landscape, killing everything in sight? Well, now the game isn’t just for shooting demons and zombie Marines anymore. A construction company called DIRTT (which stands for Doing It Right This Time) is using software based on the old Doom engine to blueprint hospital walls and office spaces. They’re hoping the technology will eradicate the two most expensive words in the construction industry.

“The two words are ‘change order,'” Scott Jenkins, the president of DIRTT, tells Popular Science. Order changes often happen when construction crews run into unexpected problems, or when contractors underestimate the labor and resources they’ll need to get a job done. DIRTT is hoping to forestall these problems with the help of their Doom engine-based software, named ICE. “We’re going to have cost certainty with ICE,” Jenkins says.

“We’re going to have cost certainty with ICE.”

The Doom engine is a computer program that can render 2-D blueprints into a 3-D space. Because the engine is open-source, DIRTT was able to adapt it for their own needs–for example, ICE “melts” with other design softwares, including AutoCAD. An engineer or an architect can use ICE to mock up a room, and create a live data set for every aspect of a space, including the electrical engineering, millwork, and piping. When those blueprints are taken into the shop, everything is constructed at the same time and put together so that there are no inconsistencies. Instead of working on each component at different times by different people, they’re all done at once by the same machine.

DIRTT says that this process greatly reduces inefficiencies and waste, and decreases the time it takes to construct an interior. “Because of ICE, we don’t have separate teams of manufacturers trying to coordinate with ordered engineering,” says Jenkins. “You’d have to build the materials separately and then put them together later. That’s all electronic for us.”

Once assembled in the shop, the walls are shipped flat by truck to the construction site. When the panels arrive at their destination, they’re popped into pre-cut aluminum frames which will hold the wall panels upright in the finished building. 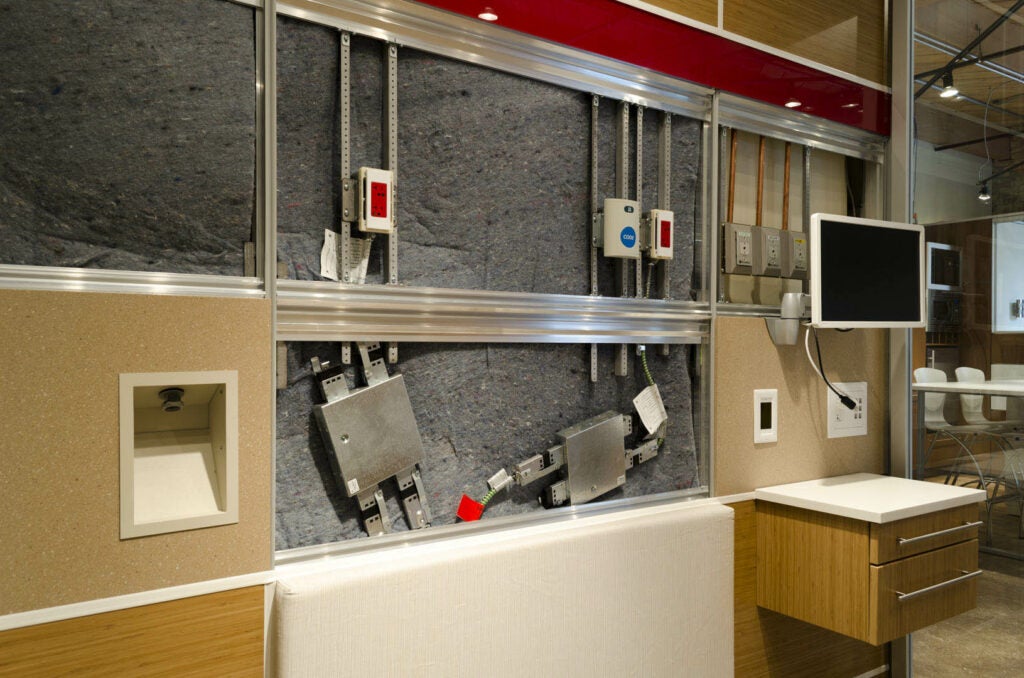 A pre-fabricated wall, designed by ICE, contains insulation, electrical equipment, and everything needed for this office to function.

In total, manufacturing and shipping happens in under three weeks. According to Jenkins, it took 11 days to build out the new Levi Strauss headquarters — an operation that normally would have taken upwards of three months.

But it’s not only the speed at which the walls are built that’s helpful. Jenkins explains that some buildings, such as hospitals, may need to reconfigure their interior panels quickly to make way for another patient with different needs. Not only that, but they need to be sensitive to rapid technology changes as well. “Hospitals are making decisions for what goes into an intensive care unit 10 years in advance,” says Jenkins. Which is why DIRTT also offers modular walls that are flexible and can be interchanged, like toy blocks. “Our clients should be able to repurpose our walls to reflect those changes.”

Despite the company’s advancements in construction technology, however, it hasn’t been able to design for the residential market just yet. But DIRTT’s videogame background is coming into play once again they are now exploring how the Oculus Rift and other virtual reality viewing systems may integrate with the ICE software — to further simplify the design process and add more flexibility for homes in the future. Says Jenkins: “Imagine, if you slapped on those Oculus glasses, you could view what changes to make as if you were in the room.”