2009 Honda Fit: A Little Economy Car Grows Up, a Little

Honda updates its smallest, most economical US model with more space, new features and increased refinement. Does that mean it's over the hill? 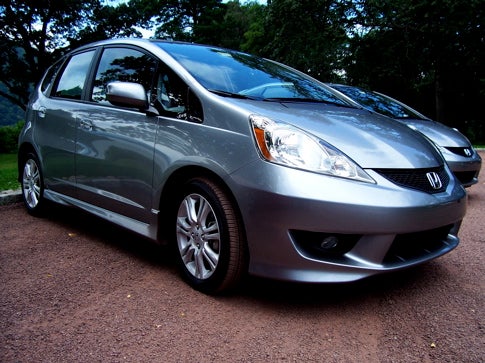 The first Japanese hatchback I ever loved was a borrowed, battered 1978 Honda Accord CVCC. It was punchy and raw, light as a laundry basket and it loved to be tossed into a dusty bend and coaxed back out. It was just the thing for a teenaged-hack Stig Blomqvist with more hormones than money, and I returned it reluctantly, a changed not-quite man.

Fast-forward a few hundred years. The first-generation Honda Fit arrived in the US in 2006 with a similar agile, connected feel. Refined, well-appointed and put together like a German microscope, the subcompact had a coltish charm recalling all the late-70s Japanese cars critics of the time termed “energetic,” “peppy” and, well, “coltish,” condescension pistols set on stun.

Time marches onward, and the colt’s grown into a fine ridgling. That, if you’re wondering, is a non-castrated male horse, four years or more, with an undescended testicle. Hats off to you, Wikipedia.

The 2009 Fit may have matured, but it hasn’t been neutered. It’s still got plenty of pep and it’s an even better value than before. It’s larger, easier to use, and more likely to replace a bigger, thirstier car in daily rotation. It’s still got the best entry-level build quality this side of a Philippe Starck steam iron and can seduce 10 cups of coffee at a time into its clutches. Tally ho!

If the Fit has lost anything, it’s a certain feeling of youthful abandon. That’s owed chiefly to several upgrades executed with an eye toward attracting older buyers downsizing from larger cars, a hopeful addition to the younger buyers traditionally seeking out entry-level cars, in between sips of XO energy beverage.

The new model doesn’t crack out of the gate like a line drive, but more thoughtfully, like a sprinter executing a 50-yard dash. Make that a 25-yard dash. While more powerful this year, at 117 hp (up from 109 hp), the 1.5-liter, four-cylinder naturally runs out of go earlier than the two-liter peppermill in the larger Civic. Torque is up slightly, from 105 pounds-feet to 106. All of that is enough to counter a slight bump in weight. The typically sublime Honda stick shift with near-perfect throws is still the best way to manipulate the Fit’s power band, but a five-speed automatic with paddle shifters works just fine.

The new Fit’s also quieter, owing to a more strenuous noise, vibration and harshness (NVH) program. As well, someone’s dialed back some of the steering quickness at dead-center position so coffee-drinking drivers can pilot single-handedly. Things sharpen up at higher speeds, thanks to a well-sorted power-assist system atop a reworked rack-and-pinion setup. Just as well, a more pliant suspension has reduced impact on peak-earning-years posteriors. Overall, the urgency knob’s been turned down a click, but none too alienating.

The ’09 Fit shares a recognizable visual attitude with the previous model, but it’s actually gotten a ground-up redesign. It’s gained nearly two inches of wheelbase to 98.4 inches and just over four inches in length to 153.5 inches. Overall, it’s 0.8 inch wider than before, with 1.4 inches more at the front track and 1.2 inches wider at the rear.

A centrally located fuel tank is still key to the Fit’s interior spaciousness, part of an approach Honda calls “Man-Maximum, Machine-Minimum.” That’s not a lost Isaac Asimov novel; it means the primary engineering goal was to maximize space for people by reducing how much space the machinery takes up. The longer wheelbase best represents in rear-seat legroom, up 1.6 inches. Cargo space sums to a generous 14.2 cubic feet.

The windshield’s been cantered forward a perceptible 4.7 inches, adding to the front-seat roominess. A set of tri-sided windows now cut through at each of the front corners, improving visibility that had been hampered by the previous model’s profuse A-pillars. They make both changing lanes and setting up cornering position far easier than the old “point and pray” system.

The rear cargo area is even easier to negotiate for 2009, with a one-handed seat adjustment system, the function of an altered rear head-rest design that allows direct fold-down.

And finally, there’s the part of the spec sheet that’s kept prospective buyers lining up, thousands deep, at Honda dealerships lately. The 2009 Fit manual turns in gas-mileage figures of 27 city and 33 highway (the autobox scores even higher at 28 city / 35 highway, with the Sport model slightly lower thanks to the increased resistance of cool wheels and body kit). Seems like old times.

Take a look inside, here. 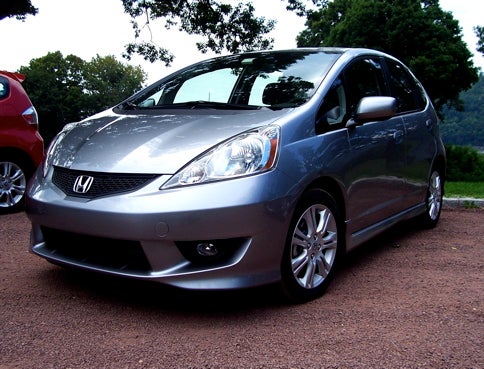 Honda’s entry-level Fit gets a bump in power and several bumps in refinement.

What price fashion? The 2009 Honda Fit Sport sacrifices a couple of fuel-economy points for cosmetic add-ons. 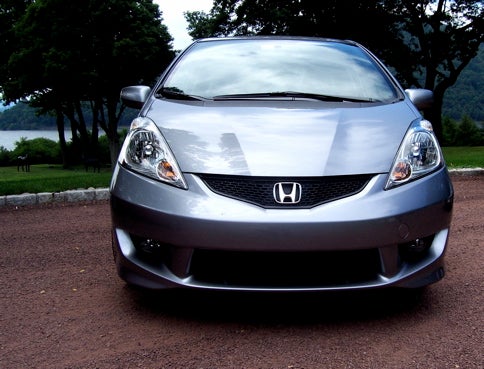 Honda added a longer windshield and larger porthole windows at the forward A-pillars for better visibility. 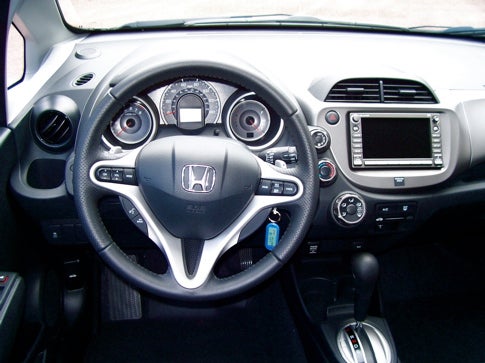 Although it’s a subcompact, the 2009 Honda Fit offers a level of fit and finish befitting more expensive cars.
Vehicles