With combat-zone brain trauma on the rise, the Army is stealing a few ideas from the NFL's playbook 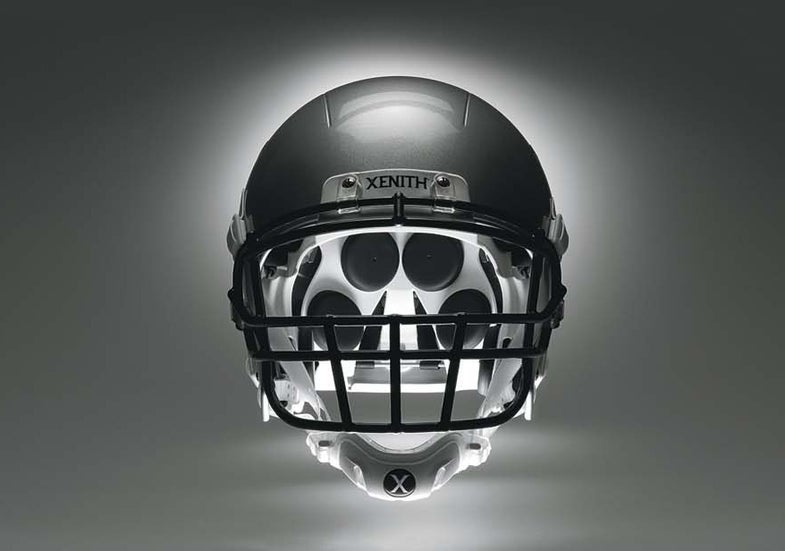 The Department of Defense (DOD) has a lot to learn about concussions. The National Football League can empathize. For decades the NFL has faced similar questions on prevention, diagnosis, treatment and long term effects. With a concussion occurring approximately every other game, research efforts benefit from an ample and growing population. Recognizing the value in such uniquely willing lab rats, the DOD hopes to steal a few ideas from the league’s playbook. A discussion with the NFL’s Mild Traumatic Brain Injury Committee is in the works while conversations with independent researchers have already occurred. But, perhaps nowhere is the football industry more equipped to help than with helmet technology. While the military researches theories regarding blast wave concussions, plenty of soldiers concussed the old fashion way could use a better helmet.

Helmet manufacturer Riddell knows a bit about football and military helmets. Founder John Riddell helped invent the World War II suspension helmet and his company currently has an 84 percent market share in the NFL and approximately 40 percent in college. Asked by military personnel in February to improve the Army’s Advanced Combat Helmet (ACH), Riddell provided a prototype inner liner in just six months. Riddell was instructed to maintain the outer ballistic shell of the ACH and the offset distance from the head to the inside of the shell (3/4 inch). Adapting the dual density foam at the heart of its Revolution football helmet, Riddell claims the new padding reduces impact magnitudes by 50 percent. The military plans its own series of lab and field tests but has offered no timeline for any decision. While again leading the pack, Riddell isn’t alone in its pursuit.

Over the past 30 years few truly novel innovations have gained any real traction in the helmet industry. But, a former Harvard quarterback, intimately familiar with concussive impacts, and equipped with an MD and an MBA from Columbia hopes to change that. Vincent Ferrara, CEO of Xenith LLC (Lowell, MA), believes the technology in his X1 helmet can help better protect those on the gridiron and the battlefield. The X1 relies on eighteen thermoplastic shock absorbers filled with nothing but air that adapt depending how hard someone gets hit. A single hole allows the air to expel and the absorber to compress fully on all impacts. Ferrara uses a bicycle pump to explain how the X1 works. Push down lightly and the air flows out smoothly into the tire, but slam down on the pump and it resists compression. By churning the air into a turbulent state, the absorber similarly stiffens for big impacts but allows air to flow out more easily on smaller hits.

Traditional padding can only compress to its material thickness, but the shock absorber can expel all the air and fold completely flat. Like trying to stop a car in 100 yards instead of just 10, this additional distance reduces the dangerous acceleration the brain (or the car) withstands by providing more time to dissipate the energy (or stop the car). The chamber refills in approximately three milliseconds ensuring it’s ready for the next incoming linebacker. Ferrara claims the X1 provides reduced maximum acceleration as compared to competitors in low, medium and high energy impact testing. Developed over four years and with more than $10 million in financing, Xenith will provide 1,500 helmets to colleges and high schools this fall and plans a full launch in 2009. The helmets will retail at $350, as compared to leading competitors that range from $175 to $300. Ferrara has had early discussions with military brass and an active development for something customized to the battlefield could begin this fall.

Meanwhile, Riddell and fellow competitor Schutt continue to tweak what they consider proven technology. The so-called Revolution helmet, released five years ago, essentially relied on an increase in foam thickness and added protection to the jaw. Riddell notes that its Revolution helmet is the only on the market proven to actually reduce concussions. A study, funded by Riddell, and published in Neurosurgery in 2006 monitored more than 2000 high school players over three years and showed that the Revolution significantly reduced the incidence rate from 7.5 percent to 5.3 percent over its older models (Both Schutt and Xenith are critical of the study). Riddell also continues to add features to its HITS system that provides real time data on impact magnitude and location to medical staff on the sideline. Schutt’s Ion 4D helmet, scheduled to launch this year, has a facemask connected to the helmet through a rubber wedge that allows the mask to significantly give on impact. Schutt claims it reduces the magnitude of impacts to the mask by 15 percent. It also claims to absorb 55 percent more impact than the Revolution at higher temperatures (a claim Riddell disputes).

Companies like Riddell, Schutt and Xenith will continue to innovate, and battle, in the lucrative sports market. As a now loyal fan, the DOD will monitor technology and evaluate what’s appropriate for combat. And, likely, one day soon a soldier will replace his helmet with something better. But one fact seems both inevitable, and inappropriate—a wide receiver will have worn it long before.