DME Test Article (Clone of “Where is Your Money”) 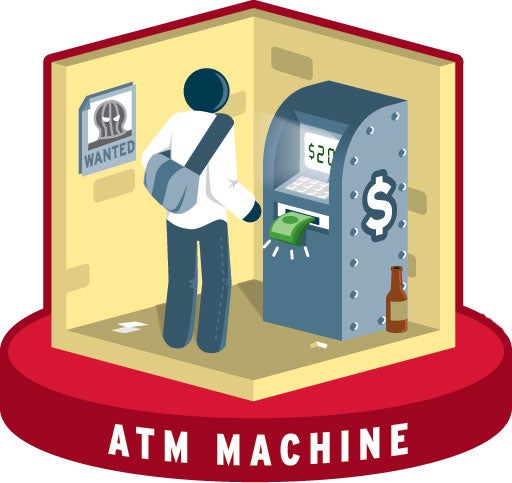 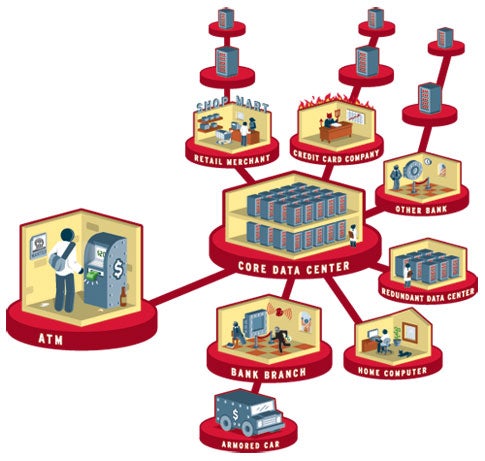 Where Exactly is Your Money?

Once upon a time, when banks observed the gold standard, every dollar was backed by an equal amount of metal. Put simply, your money was in the vault. But now cash is all most people ever get to hold, and as the dollar goes digital, the only tangible vestige of your wealth will soon be the computer that keeps track of it. So where is your money today?

What’s not in your wallet is in a spreadsheet in what’s called a core data center, a massive concrete building full of servers. But really, says information-security executive John Meakin, “your money is everywhere.” Like credit-card companies and Wall Street brokerages, Meakin’s London-based bank backs up information across data centers; his are in the U.K., Hong Kong, Kuala Lumpur, Singapore and Chennai, India. What he means by “everywhere” is that with ATMs and online banking, servers can deliver your money anywhere, anytime. But don’t go on faith. As a financial citizen, it’s important to understand how the digital bank knows what you’re worth.

What they do: When you ask for cash at the machine, an encrypted message containing your account information is sent over secure lines (such as copper wire or even satellite relays) to the core data center of your bank. Assuming you have enough money in your account for the withdrawal, the data center will authorize the transaction. Although you’ll usually see an updated account balance on your receipt, it’s not necessarily changed at the core level yet. Usually the ATMs in a given region will place this data in a file in what are called memo posts, sent to the core data center at least once a day. (Update schedules differ from bank to bank.) This is why that 20 bucks you just withdrew may not be reflected online right away: The core data server hasn’t been updated.

Security: ATMs are hardened against physical attack–the cash is held in armored drums you couldn’t bust open with an ax–but the most important security feature is your PIN. To open that secure channel to your account, the ATM reads the account number on your card’s magnetic strip, finds that account in the core data center, and matches the number you entered with the PIN on file. 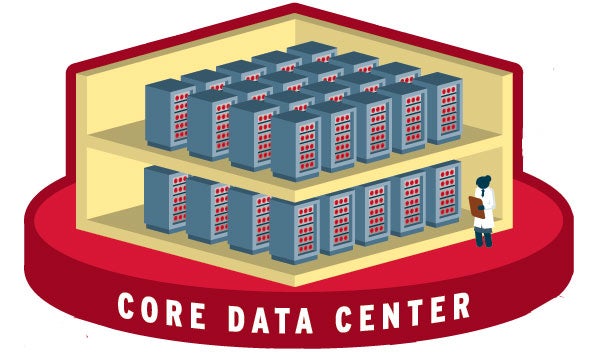 What they do: Core data centers are the brains of the entire financial infrastructure. Banks, brokerages and credit-card companies all have at least one CDC, and most have several, along with backup data centers. A small CDC might have 150 racked server boxes, made by companies like IBM and Sun. These data farms are set up as networks of servers and routing switches, just like Google and Amazon.com use. These server boxes run system software as well as the databases that hold your account balance. When that number changes–whether via ATM or home banking–this is where it happens.

Security: Physical security resembles that of a government facility: lead-lined buildings, retinal scans, fingerprinting. But the most essential measures are electronic, because a guy with a gun can’t steal money here. (Even if a band of thieves did manage to sneak in, get to a server rack, and walk away with a server, it would become a useless black box once it was disconnected from the system.) A routine message to the CDC–“Give me $20”–is encrypted at its source (say, an ATM) and routed to a data-collection point before being decrypted at the core data center to gain entry to core files. Only skilled hacking through heavy encryption could compromise your identity and your nest egg. 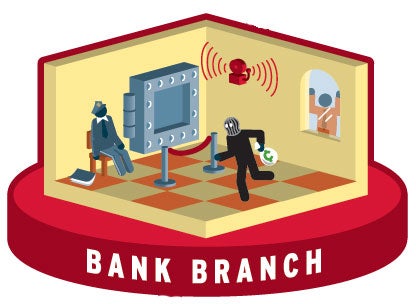 What they do: Hold the cash; handle customer service. At all times, banking institutions must keep what’s called a reserve requirement–the ready equivalent of part of what it owes the public at any given time (often $1 million or more)–under lock and key. New cash arrives daily by truck from the Federal Reserve, off-site vaults, other banks, and customers making deposits. But cash is more expensive to move and store than bits and bytes, so the bank digitizes transactions as early in the process as possible.

Security: What you’d expect–bulletproof glass, cameras, armed guard, thick vault door. Digital security is also important, however. When a teller calls up your account by contacting the core data center, security from that point on is entirely a matter of code. The message to the center is encrypted and is transmitted over secure lines owned or leased by the bank. 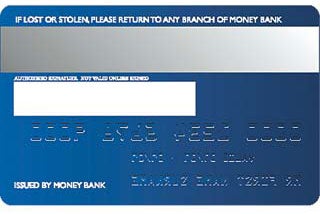 What’s on Your Card?

The magnetic strip on the back of your card does it all. It holds two “tracks” of information: your name and account number, and another randomly generated number– a “token” that is held on file at the bank to aid against card counterfeiting. Some cards store your PIN on an embedded chip, but most U.S. banks keep your PIN in a core data server, where it can be updated if you decide to change it. The account number on the magnetic strip also acts as a map that leads to your funds. The first five or six digits are called bank-identification numbers. When you use the card, they’re matched to a “lookup table,” which routes your request for funds to the core data center, which handles your transaction.