A World Without Steering Wheels is Google’s Best Idea Yet

In a telephone press conference earlier today, Google went into further detail about its first-ever prototype for a purpose-built driverless... 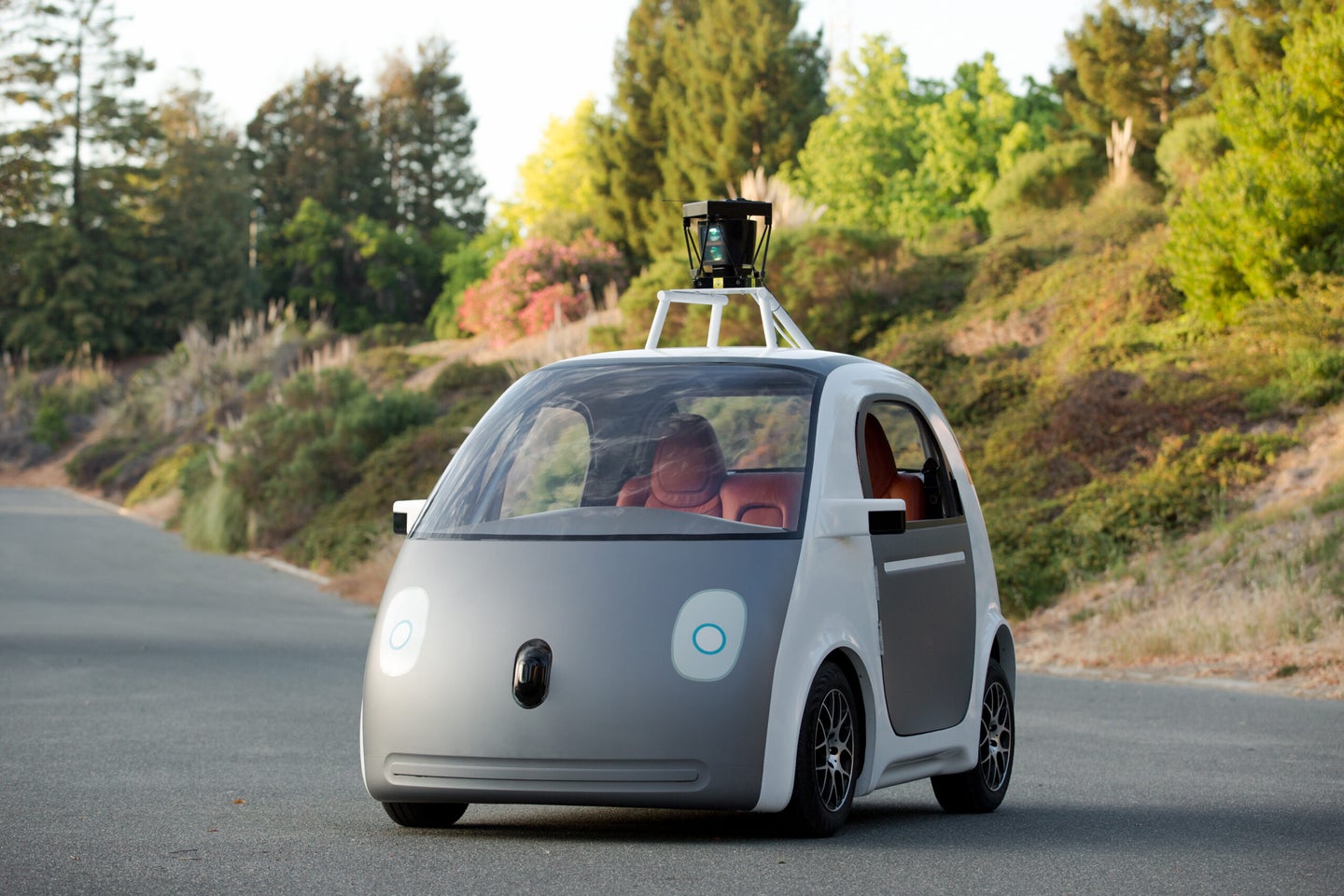 Though Google has no plans to sell cars, the company recently unveiled its first fully-autonomous prototype: A two-seater electric vehicle with a 100-mile range, and no steering wheel. Google
SHARE

In a telephone press conference earlier today, Google went into further detail about its first-ever prototype for a purpose-built driverless car. Unlike the modified Priuses and other commercially-available models that have already racked up more than 700,000 miles on public roads, the plucky two-seat electric microcar featured in Google’s introductory video was designed from day one (which was roughly a year and a half ago) to contain passengers, rather than drivers.

The coolest revelation, to me, is how squishy this prototype is. The front end and windshield are soft, to reduce the amount of damage inflicted on pedestrians and bicyclists. Whether this feature makes sense for other iterations of robotic cars is anyone’s guess. Since the unnamed Google car is restricted to speeds of 25 mph or less, crashworthiness at highway speeds isn’t a concern.

The most disappointing revelation, however, is that the robo-car in the video is something of a stunt. The real thing, which will hit closed courses this summer, and public roads by the end of the year, will still have a steering wheel. It’ll have a brake and gas pedal, too, but it’s the steering wheel that I’m obsessed with. Or the planned lack of it.

Think about that smooth plane, where the steering column should be. There are multitudes in that design choice. While automakers hedge their bets, and insist that autonomy will appear in increments, Google isn’t waiting. It wants its idyllic, automated world, and it wants it now.

I do too. I want my four-year-old daughter to grow up in an era when dying in a car is a freak event, as chilling and unlikely as being struck by lightning. I want my grandchildren to read about a time when 33,000 people were killed every year on American roads, and not understand how any of us got into a car without crumpling into a panic attack.

A world without steering wheels would be a kind of automotive utopia, and one worth rooting for.

But don’t think it’ll be easy. No one, not even Google, can cure the common car crash without help. If we want this particular utopia, we’re going to have to fight for it.

When you yank the steering wheel out of every car, strange things shake loose.

Traffic stops disappear. Your self-driving car is a consummate goody two-shoes, and can’t bring itself to speed, blow a stop sign, or even change lanes without signaling. Speed traps will become obsolete, and local municipalities will have to abandon a small but notable source of revenue. And yet, accidents will still happen. Hardware will fail, winter roads will glaze over, and robots will collide. So traffic laws will have to be rewritten, as well as insurance policies. The tangled economics and legality of car insurance will be dramatically transformed, if not innovated out of existence. Unless you’re in the business of insuring cars, or handing out tickets, this is fabulous news.

Likewise, no one will mourn the loss of the DMV (or RMV, as the case may be). Remember, everything about the robotic car is an indictment of biological driving. If the goal is to reduce human error, as well as the deaths and dismemberments that result from it, why allow any portion of humanity to opt out, and assume manual control? According to Chris Urmson, the director of Google’s self-driving car project, the team had to decide how to address “the problem of debugging the human,” or allowing the car to function autonomously, while also keeping the driver alert enough to take over in case of an emergency. “People would trust the technology more than it was ready to be trusted,” says Urmson. “We could either spend time trying to work on the human factors problem, or we could really take a bigger step forward, on the fully self-driving capability.” Google’s solution is to lose the steering wheel, at least on subsequent versions of this vehicle (after the 100-strong fleet of models with manual controls have been thoroughly tested). For the rest of us, that means surrendering to the notion that driver skills will degrade, and passing nationwide legislation that effectively destroys the institutions that regulate the ability to operate a motor vehicle.

But some decisions and outcomes won’t be quite as easy, or as gleeful, as the controlled demolition of the country’s DMV offices. What happens, for example, when only some cars are dutifully, algorithmically obeying the rules of the road, while the non-robotic holdouts ping-pong across the highway, treating the robots like the pushovers they’re programmed to be? If autonomous vehicles always strive to avoid a collision, then what will prevent human drivers from constantly cutting them off, or bullying their way through stop-and-go traffic? A single person could disrupt the best laid plans of an entire roadway of machines.

Fortunately, Google is already actively preparing its vehicles to handle problem drivers. Urmson says that current test drivers note when potential, human-error-based incidents force them to take over. Those incidents are then reconstructed in simulators, to figure out how the robot would have responded, and how to improve that response in future situations.

But to realize the full potential benefits of automated driving, from thousands of lives saved annually to cutting total gas consumption in the U.S. by 2 percent (or 2.9 billion gallons per year), every steering wheel must go. Robots can’t draft behind each other if yet another non-autonomous jerk is muscling into their formation, or magically teleport away from the blacked-out drunk drifting across the center line.

Robots also can’t, for the moment, be trusted to navigate every single road they come across—a clear prerequisite for a vehicle with no steering wheel. Routes that haven’t been painstakingly (and recently) mapped with laser rangefinders, are in GPS dead zones, or have lost their lane markings to time and weather, are all potential problems. These paths will become rarer, as robo-cars improve, and LIDAR maps become more comprehensive. Then again, American infrastructure isn’t exactly known for this pristine bill of health. Robots will balk at some percentage of these crumbling, off-grid byways. If manual control was an option, this wouldn’t be an issue. But just as removing steering wheels sets off a chain reaction of society-wide changes, reattaching them is anything but trivial. Forcing humans to drive roads too challenging for a machine means resurrecting the dreaded DMV, and hoping that atrophied skills instantly snap back into shape.

The real solution might not be something that Google, or any tech company, can supply. And depending on your political inclinations, it might not be a solution at all. In 1956, the Federal Highway Act authorized the Interstate Highway System, kicking off more than 35 years of infrastructure construction and investment, with a total estimated cost of roughly $435 billion. The result was a matrix of roads that revolutionized transportation in the U.S. and whose economic benefits are immeasurable.

An equivalent, national undertaking to automate our roads could be just as monumental. Admittedly, there are no cost estimates for shoring up our road infrastructure to meet automated standards and incentivizing the purchase of autonomous cars. We talk about networking the road to the cars, and the cars to each other, without having a sense of the collective price tag. There’s also no way to gauge the amount of political will necessary to effectively outlaw human drivers, or how such an initiative could survive the first few stories of humans watching, helplessly, as their self-steering cars malfunction themselves into a tree. And yet, imagine what the country might look like, when all that work is done? How much more productive would millions of commuters be? How much money would ultimately be saved, and how much less blood pooled on the asphalt, every single day?

That’s one option. Happily, it’s not the only one. But whatever work has to be done, and by whom, it seems clear that full autonomy won’t be as simple as blithely building a car without a steering wheel, and hoping that everyone buys one. The automotive world responds to radical technological propositions slowly, if at all. It took well over a century for electric cars to become viable products, and they still comprise a razor-thin sliver of the market’s total pie. Driverless cars could follow a similar track, and crawl towards universal adoption over the next hundred years. But if we don’t to wait a lifetime for the robotic utopia that Google is offering, humans will have to pave the way.