The extent of my dedication to obeying the particular dietary rules of Passover is limited to two meals: The first... 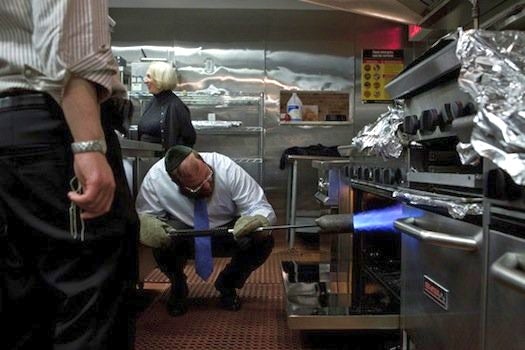 The extent of my dedication to obeying the particular dietary rules of Passover is limited to two meals: The first seder, and a breakfast of matzah brei the next morning. I don’t bother scouring the house for chametz (any bits of leavened bread, forbidden during Passover), because during the rest of the year I’m a big fan of leavened bread (it’s delicious! Mmm, leavened bread) and I assume there’s chametz all over my kitchen. But I wasn’t aware that eradicating chametz could involve giant, high-powered blowtorches wielded by a rabbi described as being “built like a football player.” Maybe I’ll show more interest in the tradition next year.

Jews traditionally do not eat leavened bread, essentially anything made with a grain-based dough that has been allowed to rise, during Passover. But even further, religious Jews have to rid their homes of chametz. Moderately religious Jews will often throw out any bread they find, but for Orthodox and other extremely religious Jews, the elimination of chametz is more of a kitchen cleansing. That might involve all sorts of bleaches and cleaning chemicals, days of scrubbing and boiling equipment. Sometimes, a rabbi will be asked to come in and inspect, to make sure the kitchen is up to anti-bread code. But the Wall Street Journal found one rabbi, a certain Rabbi Naftali Marrus, whose inspection technique is less a period of intense cleaning than a fire-laden war on chametz.

Rabbi Marrus, a supervising rabbi for OK, a Brooklyn service that certifies food as kosher (they’re responsible for the K-within-a-circle logo–get it?), uses a three-and-a-half-foot blowtorch he’s dubbed “The Inferno” as one of the tools in his arsenal. The giant propane blowtorch is fanned over appliances, cooking vessels, utensils, and serving trays, erasing even the memory of any breadcrumb dumb enough to get in its path. Cheers to Rabbi Marrus for combining the world of industrial flamethrowers with religious observance–we do love ourselves some blowtorches, although one of our previous creations, the bacon blowtorch, might not be quite right for this application.