Marathon Mating and Female Penises—Bug Sex Just Got Even Weirder

Deep in the dark caves of Minas Gerais, a hilly state in southeast Brazil, there lives a genus of insect... 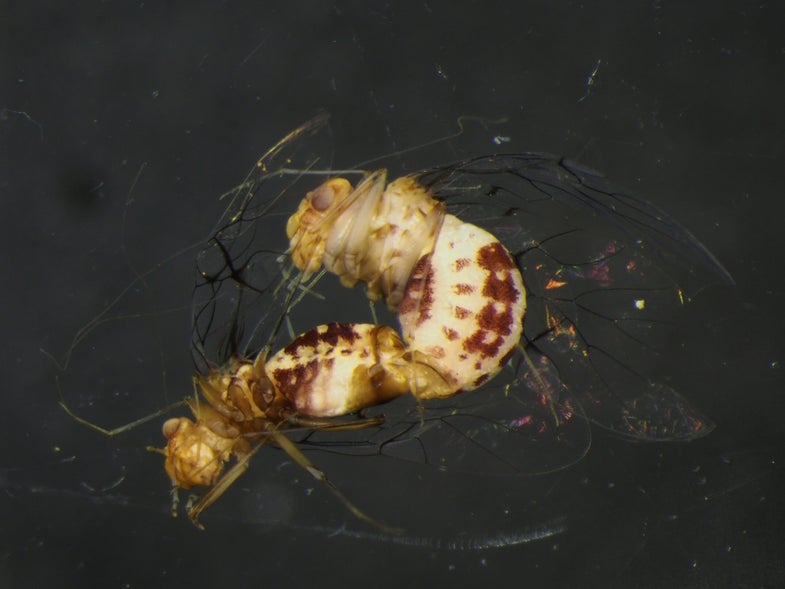 Deep in the dark caves of Minas Gerais, a hilly state in southeast Brazil, there lives a genus of insect called Neotrogla. Flitting around the resource-poor caves on translucent wings, these tiny, white-and-yellow insects live on a diet of bat feces, even feasting on a dead bat now and then. Neotrogla are a lot like barklice, the wingless insects that worry southern homeowners by covering their oak trees with white silk. But they’re different, too—they’ve only been found in these caves, and they sport wings that their cousins have lost with time.

Oh, yeah, and the females have a huge, spiky, penis-like appendage that they jam in their partners for days’ worth of painful copulation. That’s a difference, too…

Roger Ferreira, a biologist at the Federal University of Lavras in Minas Gerais, Brazil and author of the paper published today in Current Biology, uncovered this incredible ritual by observing the copulation habits of a total of 24 pairs of the different species. Ever respectful of the lovemaking process, Ferreira and his team “did not record [the couples] and made our observations in intervals of 30 minutes, to not disturb them,” he says. But the scientific peeping Toms did manage to get a pretty good look—and some photos to prove it.

Here’s how they throw it down: When a couple starts mating, the female will mount the male, which, in most animals, is already an unusual configuration. “That’s a pretty uncommon position,” says Keith Philips, an evolutionary biologist at Western Kentucky University in Bowling Green who specializes in cave insects. Once she’s ready, the female will plunge her gynosome—a penis like structure made of membranes that hardens before mating, just like a human penis—deep into the male’s genital duct, well into his abdomen. The gynosome, which is surprisingly long given her body size, also has small spiky barbs at the end of it which hook to special pouches inside the male, anchoring the two together. Then, the male passes his sperm to the female through his phallosome (the remnant of a penis) and into the spermathecal duct, where she transports the sperm back into her own body.

Yes, this whole thing probably hurts the male, Ferreira says, “This is why we believe that males developed the pouches in their genital chamber…to reduce the damage.”

With the gynosome holding the two insects together on the inside, the coital position seems more like a genital full-nelson. So the researchers wanted to test how strong that anchoring really is. “Pulling apart coupled specimens…led to separation of the male abdomen from the thorax without breaking the genital coupling.” In other wrods, trying to separate the mating pair meant pulling the male into two pieces. Dang, that’s a tight embrace.

Philips theorizes that the female may grip the male so tightly to prevent competitive females from dislodging her. “If that’s the case and more than one female is fighting, that would definitely be an advantage,” he says, although he admits he is only speculating.

The sperm transmission process doesn’t take too long, but Neotrogla sex is not for the faint of heart—it lasts an exhausting 40-70 hours. But the reason for this long copulation may stem from another unique female behavior: the females absorb the other nutrients in the sperm well before they produce mature eggs, which suggests that the females are probably using the sperm to nourish themselves as well. Ferreira theorizes, “In a habitat with such food constrains, gathering resources to produce eggs is a tough task. So, males are potentially good sources of [nutrition].” There’s little doubt in Ferreira’s mind that it’s the females who are insisting that it’s not a quickie.

But Philips isn’t so sure it’s the females who want marathon sex. “Maybe he’s guaranteeing that his sperm will fertilize the eggs and prevent the female from copulating with others—a version of mate guarding,” he says. Ferreira and his team plan to do a more detailed study of the copulation in their future work, hopefully with a better understanding of its timing.

In his future work, Ferreira hopes to do a closer study of Neotrogla‘s mating process. Philips suggests casting a wider net, looking at the mating behaviors of related genera or even “marking” male sperm to see which female qualities the males find most attractive.

Despite the remaining questions, Ferreira and his team have found themselves an awesomely bizarre genus of insect. “This is truly a spectacular novelty that they’ve discovered,” says Philips. Almost sheepishly, he adds, “I definitely learned something new today.”