Recently, photos have appeared of an active duty Pterodactyl UAV being towed into take off position in the PLAAF 38th...

Recently, photos have appeared of an active duty Pterodactyl UAV being towed into take off position in the PLAAF 38th Division. This photo set is believed to be from late August 2014, during the “Peace Mission 2014” exercises that included Russia, Kazakhstan, Tajikistan and Kyrgyzstan. It is likely that the two regiments of the 38th Division have about 24-36 Pterodactyls at full strength. This close up of a CCTV 13 news broadcast shows the Pterodactyl’s sensors, including the white circular electro-optical camera, as well as a laser rangefinder/designator and an infrared or night vision camera.

This Pterodactyl UAV is carrying two HJ-10 antitank missiles, and is painted in a PLAAF grey color scheme, along with the red and yellow star insignia of the PLAAF. Its underslung electrooptical sensor and laser targeting sight are covered by red cloth. Comparable in size to a MQ-1 Predator, the Pterodactyl weighs about 1,100 kg, can carry a 200kg payload and flies for 20 hours, at a range of over 4,000km. Compared to the other Chinese UCAV, the CH-4, the Pterodactyl has a pronounced forward bulge that houses a larger satellite dish, which improves both communications range and resistance to jamming. 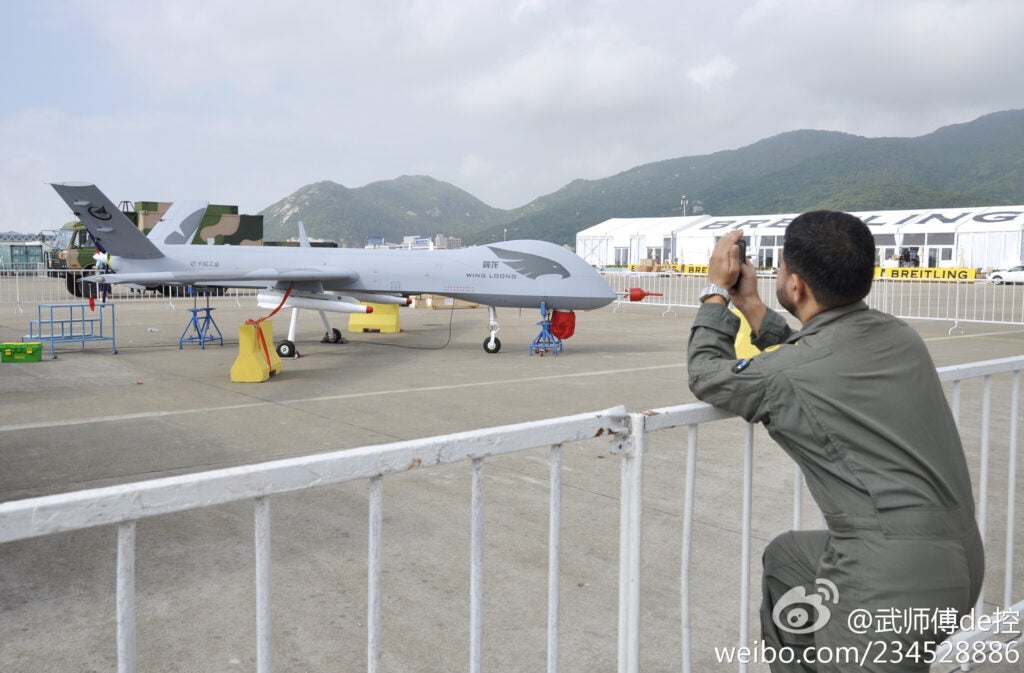 A visiting foreign pilot takes a picture of the Pterodactyl (Wing Loong in Mandarin Chinese) during the 2012 Zhuhai Air Show. China has already achieved some success for its UAV export ambitions by selling the Pterodactyl to Middle Eastern customers.

The Pterodactyl has also been put on the export market, with successful sales to the Middle East. Much as its parallel US Predator-class systems had been used by the US in support of counterterrorism and counterinsurgency missions, in addition to possible counterterrorist operations in western China and Central Asia, the Pterodactyl offers a new potential tool for Chinese peacekeeping forces in African locations like South Sudan, for either reconnaissance or armed protection. If China’s counterinsurgency and covert action needs increase, it is likely that the PLAAF will acquire a larger, higher flying cousin to the Pterodactyl, just as how the MQ-9 Reaper has taken on many of the Predator’s former missions.