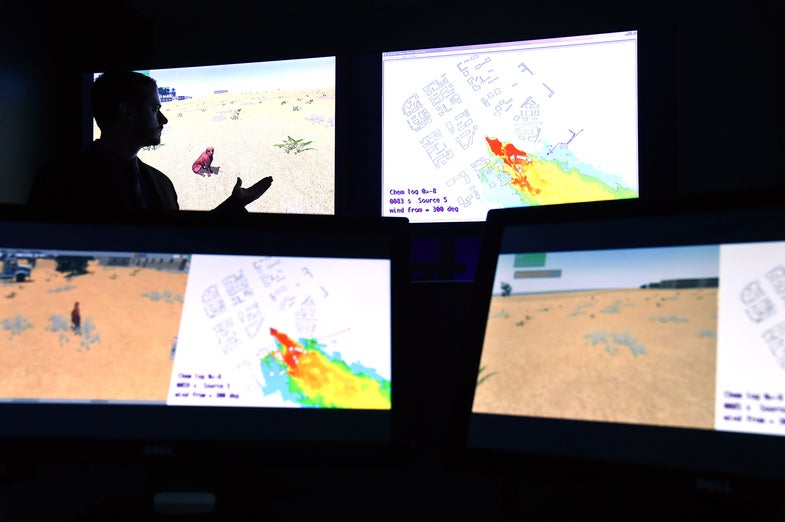 Small, homemade bombs are an ever-present threat in America’s wars. Commonly known as Improvised Explosive Devices, or IEDs, these bombs are easily made by insurgents, hidden along patrolled roads, and surprisingly deadly. In the early years of the Iraq war, the Department of Defense commissioned a serious bomb-proof vehicle program and borrowed lessons from submarine warfare to protect troops against these bombs. There’s another, lower-cost way for America to fight IEDs: Dogs.

Dog noses can smell the toxic plumes that emanate from unexploded bombs, and detect them at much lower thresholds than both human noses and human-made chemical sniffers. When trained to detect the right kinds of scents, dogs will lead their handlers to the trap. From there, ordinance disposal teams can take appropriate action and, if need be, send in robots to inspect and disarm of the suspicious package. In order for this all to work, though, the dog has to search for the smell, and then lead the handler to it. If the handler can’t interpret the dog’s actions correctly, the dog may instead follow the handler’s urging and ignore a scent it’s been tracing. That’s where ROVER comes in. A module for the military’s Virtual Battlespace simulation tool, ROVER teaches handlers how to listen to their dogs. Here’s how Adam Moses, a computer scientist with the Naval Research Laboratory, describes the value of training with ROVER in a press release:

In ROVER simulations, handlers follow a virtual dog as they chase down the scent of a bomb. Handlers communicate with their dogs through gestures read by an Xbox Kinect, learning how to guide the dogs and at the same time reading dog gestures that will lead them to the bomb site. It’s a virtual lesson in defeating a very real threat.

Watch a video of the game below: