It's an event that should bring us all together, so don't mess it up. 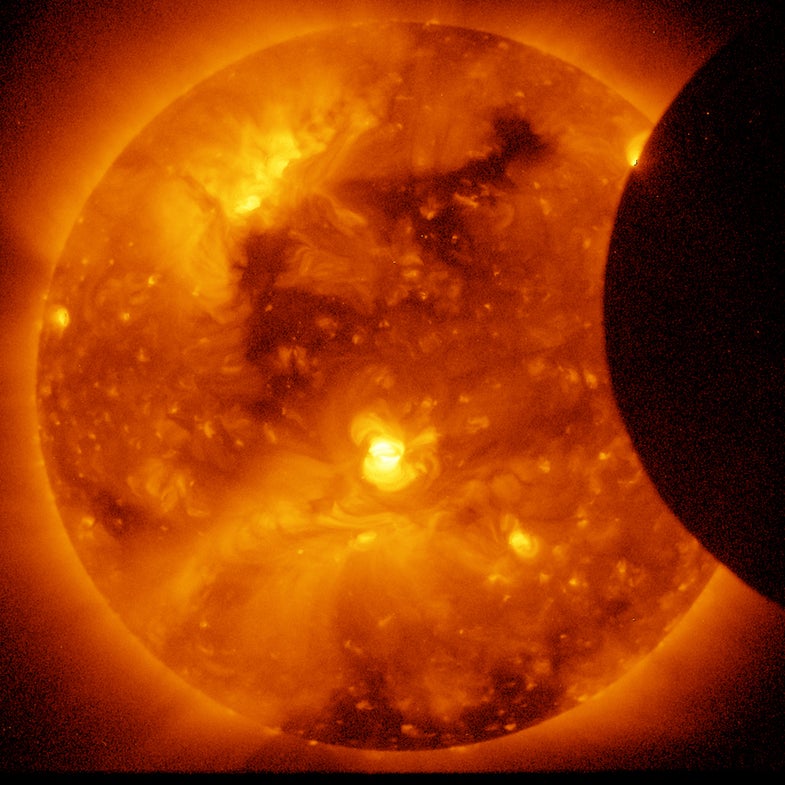 Bill Nye (the “Science Guy”) has made no secret of the fact that he thinks the world is in a dark place. Especially when it comes to our ability to rely on scientific reasoning. “This movement now to presume your intuition is as good as science, that you should ignore facts, is just weird and not right,” he told PopSci. “Everybody is talking about making jobs, but to get jobs in the U.S. you need innovation—and for innovation, you need science.”

That’s one of the reasons he’s so excited about Monday’s total eclipse. As the moon transits between the Earth and the sun on August 21, a staggering 14 states will experience totality—brief periods when the world will become dim as night. And even outside that broad swath of temporary darkness, the entire nation will experience some kind of partial eclipse. Millions and millions of people will experience the same awe-inspiring phenomenon on the same day. It’s an opportunity for shared moments of quiet, from sea to shining sea.

“This amazing phenomenon is passing across the world’s third most populous country, and because of our developed highway system, almost anyone can drive out and get right under it,” Nye said. And the fact that it’s an event made possible by our scientific know-how makes it all the sweeter. “There’s no psychic who can predict eclipses within hundredths of a second for us,” he said. “That’s all science. We’re all coming together and it’s science, just science, nothing but science and it’s beautiful.”

Nye will be viewing the eclipse from Beatrice, Nebraska, as a representative of The Planetary Society (of which he is the CEO). He’ll join park rangers at the Homestead National Monument to welcome throngs of expected guests and help them get the most out of the day. But for the fans who can’t join him, he’s got a couple big pieces of advice.

The first is pretty obvious: he doesn’t want anyone burning their eyeballs out. The UV radiation of the sun is dangerous for sensitive eye tissues—just like it is on any other day of the week—and during an eclipse, you’re more likely to get caught off guard. The moon will block enough light to keep your eyes safe until it suddenly doesn’t, and it’s easy to get caught unawares and stare too long.

“The blessing and the curse of an eclipse—the blurse, if you will—is that it’s so fascinating you just want to stare at it,” Nye said. “So wear the right glasses.”

You should make sure that any eclipse glasses you’re using are actually safe (we’ve got some advice on that). If you’re stuck without a certified pair, use some indirect method of viewing the eclipse (like a pinhole camera, which is easy to make on the fly).

But while physical safety is obviously important, Nye seemed even more concerned about a different subject: photographs. He knows all too well that a thrilling moment can be lost if participants choose to focus on documenting instead of simply savoring.

“Changing the subject back to me, finally,” he joked, “People love to take pictures with me. It’s become a whole thing. And so they come up and take these selfies with me, and then afterwards if someone asked them what we talked about, I guarantee most of them have no idea.”

If you blow your chance at having a meaningful interaction with Bill Nye The Science Guy, you can probably manage to catch him on another book or TV tour, or at some random science event—he gets around more than the moon gets in front of the sun. If your minute or so of totality goes by in a blur of Instagrams and Snapchats, you’ll probably have to wait at least a few years to make it up to yourself.

“When you’re in love, you want to tell the whole world,” he said. “But you can get caught up in making pictures and forget to actually be there.”

This isn’t to say you shouldn’t take a photo or two. After all, it’s a momentous occasion. You’ll want something to remember it by. But if you spend all of it fumbling with your phone, no memento will make up for the fact that you never really formed any memories of your own as the moon blacked out the sun.

If you’re dead set on capturing the event on camera, follow our guide to make sure you know what you’re doing. And practice beforehand, to limit the amount of time you’ll spend setting up each shot. Give yourself a time limit: instead of taking photo after photo in the hopes of ending up with the perfect one to tweet out afterwards, promise yourself you’ll only take your camera out at short, predetermined intervals. Make sure you know how long totality is where you’re going to be, and make sure you’ll be spending most of it looking at the eclipse without an iPhone eclipsing your view.

You might even consider the following: just skip the pictures entirely. Sit back, relax, and think about how many other people are spending their lives under the same star. It’s not like you’ll have any trouble finding documentation of the day when you’re done.

“There will be a lot of eclipses,” Nye said. “I for one just want to live in the moment. I hope everyone can do that. Just stop and say, ‘My goodness, this is amazing! It’s dark in the middle of the day, and my beloved moon, which I’ve come to know and appreciate my whole life, is blocking the sun—this is gorgeous.’ It’s cool, so just soak it up.”

If you really must whip out your camera, be sure to share your photos with the hashtag #PopGoesTheSun on Twitter and Instagram—but remember: there’s no need to spend any potential viewing time on social media. You can save those ‘grams for posting at the end of the day.