The biggest thing in the Universe is a cosmic hole 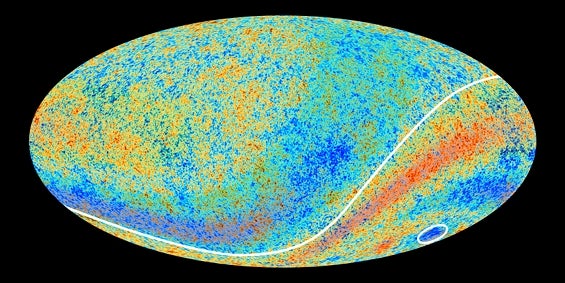 If you’re wondering what the biggest structure in the universe is, astronomers have said it’s nothing, really.

That’s not false modesty on their part–astronomers now have evidence that the largest known structure in the Universe is a “supervoid,” or a sphere of almost nothingness that’s 1.8 billion light years across. It’s not completely vacant though; the supervoid is 20 percent emptier than your typical region in the universe. “Supervoids are not entirely empty, they’re under-dense,” said András Kovács, one of the study’s co-authors.

Kovács and his team were examining an area of space called the CMB Cold Spot, a huge, abnormally cold stretch of universe that was discovered 10 years ago. Researchers speculated that the spot was a supervoid, but there was no evidence that such a void existed. The researchers used Hawaii’s Pan-STARRS1 (PS1) telescope and NASA’s Wide Field Survey Explorer (WISE) satellite to examine the area that is 3 billion light years away. After conducting a targeted astronomical survey of the area, they demonstrated that about 10,000 galaxies were missing from that area of the universe. This leaves one explanation: the supervoid, which lead researcher István Szapudi said could be “the largest individual structure ever identified by humanity.” The supervoid drains energy from light that travels through it, leading to a drop in temperature.

“This is the greatest supervoid ever discovered,” Kovács said. “In combination of size and emptiness, our supervoid is still a very rare event. We can only expect a few supervoids this big in the observable universe.”

This discovery is far from solving the mystery of the Cold Spot, however. Scientists still don’t understand why the void formed in the first place, and the emptiness only accounts for about 10 percent of the region’s drop in temperature.

The coexistence of the CMB Cold Spot and the supervoid, however, may have huge implications, because they fit with the idea that the universe is expanding at an accelerating rate. The Royal Astronomical Society explains the theory:

As for what’s next, the team plans to keep plugging ahead with their work using improved data from PS1. This isn’t the last you’ll be hearing of supervoids, as there is another large void located near the constellation Draco (whose father will surely hear about this).