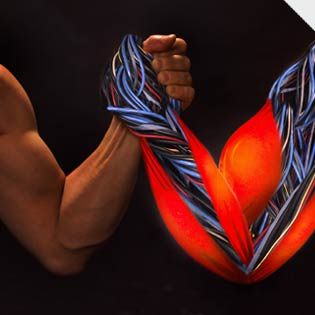 Logo for Bar-Cohen’s challenge to the scientific community, to create an arm using electroactive polymers that can beat a human in an arm wrestling contest.

In 1999, Yoseph Bar-Cohen of NASA’s Jet Propulsion Laboratory challenged the engineering world to an arm-wrestling contest. Sort of, anyway. He doesn’t plan on participating himself, and the arm, which will face off against a human opponent of middling strength, has to be robotic. The catch is, he’s not asking for your standard metallic appendage–this robotic arm must be built with electroactive polymers (EAPs). These materials, which are often referred to as artificial muscles, bend, stretch, twist, or contract under the influence of an electrical charge, behaving much like real muscle fibers. So far, they’ve been used to make a swimming toy fish, drug release capsules and a miniature windshield wiper, but Bar-Cohen sees far more in store for EAPs, including more human-like robots.

Before issuing his arm-wrestling challenge, Bar-Cohen, who heads the Nondestructive Evaluators and Advanced Actuators Laboratory at JPL, did pioneering work himself with the multifunctional materials. He developed an EPA-driven contraption that resembles a miniature windshield wiper for the optical/infrared window of the 2.2-pound, palm-sized Nanorover. The rover, which was scheduled to fly as part of 199TK’s MUSES-CN mission to asteroid 1998SF36, was eventually left behind due to mass and budget restrictions. Bar-Cohen’s wiper would have been used to clear away microscopic debris from the rover’s lens.

Bar-Cohen, who doubles as an unofficial EAP spokesperson, sees their initial inclusion in the mission as a step in the right direction. “Just the fact that [NASA] suddenly treated this idea as something that has potential means they’re going to fly with it one way or another.”

Another major milestone for EAPs, he says, is the first commercial product. Eamex, a Japanese corporation, has made a small splash in the toy industry with the introduction of an EAP-propelled fish. An EAP strip is attached between the body of the fish and its tail fin; electrical signals coax the polymer strip into alternately expanding and contracting, which moves the fin back and forth, propelling the fish forward.

Other groups have grander plans for EAPs. Marc Madou, a professor at University of California at Irvine, developed what he calls “smart pills”–capsules that would be implanted into the body to release doses of medication. The capsules are about the size of a small matchstick and come equipped with a sensor and a battery, and they’re covered with a series of EAP valves. When the sensor detects a certain chemical change, it signals the battery, which emits an electrical charge. This charge activates the polymer valves, causing them to flap open and expose tiny perforations on the capsule surface. Medication stored in the capsule then seeps through the perforations until the sensor determines that a sufficient amount has been released. The sensor signals the battery again, which triggers the polymer flaps to close; the perforations are covered and the flow of medication stops. Madou, who has co-founded a company, ChipRx, to develop the device, expects it to be on the market within five to ten years.

To move toward the goal of building more lifelike robots, however, a strong, EAP-driven robotic arm is critical. That’s why Bar-Cohen is excited about a claim by California-based SRI International that, with sufficient funding, they may be ready to wrestle.

SRI’s progress on raising the necessary capital is unclear, but Bar-Cohen hopes the company will be ready in time for the next SPIE Electroactive Polymer Actuators and Devices conference in March 2005. And although he is anxious to finally witness the event, the spokesman in him sees it more as an opportunity to spark interest in artificial muscles than as a real test of their potential. For that reason, he wants to make sure that the robot’s competition isn’t too fierce. “We would like to go against a high school student, who will be selected not for force capability but for intelligence,” he says, adding that the student will be asked to write an essay about the experience. “Hopefully he won’t be too strong, so we’ll give the arm a chance to win.”