One Dive, One Breath

Free dive to 55 feet? No sweat. It's the return trip that could kill you. 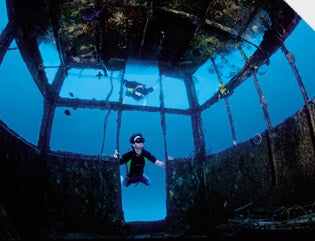 BOTTOM’S UP
The writer free dives on a 45-foot shipwreck off Grand Cayman Island.

My heart begins pounding the theme from Jaws, triple tempo, as the shipwreck inches into view. Given the task I face–kicking down 55 feet on a single breath–such anxiety is a perfectly normal response, although precisely the wrong one for a free diver. Fear releases adrenaline, which jacks up the heart rate, constricts blood vessels, and causes rapid, shallow breathing. But if I can relax, an entirely different experience awaits: The exhilaration of probing the deep blue unencumbered by air tanks.

That’s the essence of free diving, a sport defined by lung capacity and physical endurance. Taken broadly, “free diving” encompasses everything from floating face down in a swimming pool (static apnea) to plunging more than 500 feet on a weighted sled (no-limits diving). But the majority of the world’s 20,000 free divers fall into the “constant ballast” category, relying on little more than a mask and fins to dive as far as their lungs will take them. That’s where I fit in. I’ve come to Grand Cayman Island to put my apnea limits to the test, and to use the two-day Advanced Free Diver course at Divetech to hone my family-vacation snorkeling skills into spear-fisherman shape.

Free diving dates back to at least 4,500 B.C. and Mediterranean mother-of-pearl divers. But it wasn’t until Paul Bert, the 19th-century French physiologist, first described the physiological “dive reflex” in marine mammals that scientists began speculating on its existence in humans. They soon discovered that nerve receptors in the face tell the heart to throttle down the instant we hit water, causing pulse rates to drop as much as 50 percent in novice divers and sink to eight beats per minute in world champions. Blood vessels in the skin and extremities constrict, while those in the brain, heart and lungs dilate, shunting blood to the places that count. Even the spleen gets in on the act, releasing an extra dose of red blood cells to ferry oxygen around the body.

“Just sitting in a pool moves a liter of blood from the body’s periphery into the chest,” says Claes Lundgren, professor of physiology and biophysics at the State University of New York at Buffalo, and a top free-diving researcher.

Until the mid-20th century, scientists believed that the chest cavity would implode at around 115 feet. Water pressure, they argued, reaches 65 pounds per square inch at that depth, which is enough to shrink lungs to the size of grapefruits and collapse rib cages like empty soda cans. Their theory went out the window in the 1950’s and early 1960’s, however, when divers like Enzo Maiorca returned from beyond 115-feet with rib cages intact. We now know that water pressure forces blood vessels in the chest to swell, filling the void left by the lungs with an incompressible fluid.

That’s all well and good, but before testing this body’s dive reflex, it seemed prudent to spend some time in the Divetech classroom. Step one: Learn how to breathe. Emulating a human bellows, I filled the lower two-thirds of my lungs with a deep belly breath, and then inflated my chest by stretching my intercostal (between rib) and subclavian (below collarbone) muscles. This produced a burning sensation–caused by expanding tissue–and an oxygen-rich wooziness. “You might be sore tomorrow,” warned Cali Johnston, my instructor. “When I first learned breathing cycles, it felt like someone punched me in the ribs.”

Out at the wreck, a 45-foot freighter called the Doc Poulson, this breathing technique pays off as I begin my “breathe up”–the pre-dive cycle encompassing a minute of normal respiration, 10 to 20 slow, deep breaths, and several faster “super vents.” I’ve already aced the various drills, such as underwater mask clearing and a mock deep-water rescue. Now it’s go time. To pass the class, I must dive to the bottom and retrieve a handful of sand–about a minute and a half round-trip.

Among the dangers of free diving, the most disconcerting is shallow-water blackout–the brain’s frightening tendency to shut down within 15 feet of the surface during the ascent. As you descend, water pressure squeezes your lungs, condensing the oxygen and giving you what feels like a second breath. During the return trip, however, your lungs re-expand, dissipating what’s left of your oxygen. If levels drop too low, not enough will move into the bloodstream, and the lights go out. Fortunately, the body’s laryngospasm reflex kicks in to tighten the throat and keep water out for up to a minute–just enough time for your dive buddy to drag you to the surface, tilt your head back, and beg, “Breathe, baby.”

Knowing Johnston will be there watching my eyes as I ascend (seeing them roll back in the head is a red flag), I dip below the surface. Staying in the syringe–dive speak for a tight hydrodynamic column–I kick down to 30 feet, my point of neutral buoyancy, and then sink effortlessly to the bottom. I feel good–surprisingly good–thanks to the densely packed oxygen molecules in my lungs.

Lingering a moment, I peer up at the mirrored surface that separates this liquid world from mine. Diving to 55 feet was no sweat. I figure I could dive twice that with a little practice, reaching what scientists thought, not 50 years ago, was the body’s depth limit. Today, however, that boundary has been pushed to at least 531 feet (the current no-limits world record), which begs the question: Just how deep can humans go? “We don’t know that yet,” says Lundgren, adding ominously. “But one day someone will find out.