Into the Dangerous, Green Night

Here's what it's like to train with the advanced night-vision technology that gives U.S. troops their covert edge.

I’m in a long, dark tunnel. My view is a perfect circle-narrow, green and grainy. I can see and feel the ridges lining it. But if I lift the night-vision goggles from my eyes, it’s total blackness. A big, deep nothing. Far ahead, a pair of boots moves steadily away.

I press on, making it to the end of the tube. It gets brighter, but I can’t discern what I’m emerging into. Is that a floor ahead or a pit? Can I stand up? The goggles cut off depth perception and peripheral vision, so I move my head in wide arcs, clawing my way past the end of the pipe. Suddenly a hand materializes in front of me. I grab it, and 25-year-old Sgt. Shane Levings pulls me to my feet and points me to the next obstacle: a feeble-looking chain ladder that heads straight into . . . well, what exactly?

That’s the point: We don’t know what’s next. But the four young Marines leading me through the Night Integrated Training Environment (Nite) at the Marine Corps Warfighting Laboratory in Quantico, Virginia, must learn to figure it out. They’re training for the Marine Corps’ specialty: night combat in environments peppered with alarmed civilians, explosive booby traps and enemy soldiers–not unlike what’s facing their fellow Marines in Iraq at this very moment. And at the Nite, they get it all. This 10,000-square-foot facility, the only complex of its kind operated by the U.S. military, features a sequence of rooms, often rigged with simulated machine-gun-firing combatants, that mimic deserts, jungles, woodlands and dense urban terrain. Training exercises are held day or night, in any weather, with any variable the Marines choose. Right now an illegal drug lab, a radio hut, a school bus, a treehouse, dry riverbeds, wire fences, log piles and a number of other obstacles are arranged in a course that would prove challenging even in broad daylight.

When facility administrator Michael Fink sends Marines into the darkness, only he knows what they’ll face. But the goateed retired Marine does give a rough outline of what to expect: “In the first room there’s a pilot who’s been shot down. Find him!” He also primes them on the use of night-vision goggles, or NVGs. The ones we’re wearing aren’t as refined as the goggles being used by troops in Iraq, but they’re better than anything on the commercial market. (To preserve its battlefield advantage, the U.S. government permits the sale only of NVGs that are 40 percent lower-quality than those in use by the military.) Fink’s instructions are spoken with a booming Marine Corps inflection: “These need ambient light–starlight, moonlight, reflected light. If there’s no
ambient light, turn on the infrared light. But remember, if your enemy has NVGs, he’ll see it and you’ll be a target!”

After sending us in, Fink heads to
a control room where he watches
our progress on monitors displaying video feeds from night-vision cameras around the facility. Inside the course, I can’t get over the goggles’ brightness, which is generated by an image intensifier that increases the number of photons passing through the lens. I can see everything, even slight textural details like gravel composition and wood grain. But the lack of depth perception and narrow view–the result of a single scope sending images to both eyes–takes a little getting used to. “Last week a captain was climbing down the rope when all of a sudden he let go,” Fink says. “He thought he was six inches off the deck, but he had four feet to go. Don’t let go until you feel the ground under your feet!”

After we navigate a series of elevated planks and rope ladders, a mannequin dressed as an enemy soldier suddenly opens fire from a nearby hut. The Marines return fire laser-tag style with sensor-triggering guns–I’m carrying a rubber rifle–and the bad guy ends his day with a piercing scream.

We pass through a minefield, climb into a tree house, and descend a 10-foot rope into the woodlands. The Marines shimmy down expertly; I drop like a rock. Next is a 20-foot climbing wall, a seemingly simple exercise made challenging by the constant need to focus the goggles between nearby objects (your next handhold) and ones that are far away (a soldier to your rear). Then we’re in a desert, where the Marines liberate a mannequin-cum-hostage from a school bus before heading into the final scenario: urban warfare. One by one, we head up a set of stairs, covering one another all the way.

For Lt. Rashad Jamal, who is about to head to flight school, this training is as much about trust as it is about technology. “With the night-vision gear, you don’t have peripheral vision, so it’s hard to keep track of who’s next to you,” he says. “We train so that we don’t need to look every few seconds–I know you’re there, and I can focus on the target.”

And though night-vision gear has its limitations, it takes only a second without it to realize the critical advantage it provides, particularly since most U.S. opponents have either low-grade night-vision gear or none at all. Jamal says that’s why this training is so critical and is taken so seriously by the troops. “We like to do our fighting at night,” he says, “because we know the enemy can’t.” 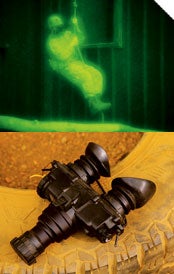