Why Do the Colorado Rockies Keep Their Baseballs in a Humidor?

PopSci sniffs out the answer. But why they keep their cigars in a duffel bag remains a mystery 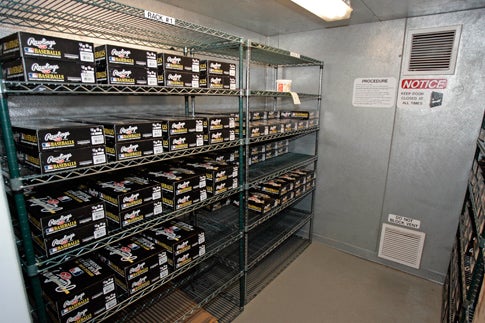 Tune into a Colorado Rockies game, and you’re bound to hear one of the announcers mention the team’s most famous piece of lore: They keep their baseballs in a humidor. Cigar aficionados keep their cigars in a humidity-controlled environment to prevent the tobacco leaves from drying out, but the Rockies are more concerned about dried-out balls carrying farther and driving up scores. So far, it’s worked, having quelled the offensive binges the park was known for when it first opened. But scientists still can’t say exactly why it’s so effective.

From the 1995 to 2001 seasons, National League pitchers at Coors Field recorded a horrendous earned-run average (ERA) of 6.50, more than two runs a game higher than the 4.37 ERA recorded at other stadiums. Fans and the media attributed the numbers to Denver’s mile-high thin air. But in the winter of 2002, based on a hunch that the balls might be drying out and losing weight in Denver’s arid climate, engineers at Coors Field installed a humidor for storing game balls. Since then, N.L. pitchers have posted a 5.46 ERA at Coors.

According to a 2004 study by physicist David Kagan of California State University at Chico, keeping the balls at 50 percent relative humidity lowers their coefficient of restitution, a.k.a. bounciness. This means that the balls don’t bounce off the bat as powerfully as dried-out ones do. In December, Edmund Meyer and Alan Bohn, physics professors at the University of Colorado, found that the added moisture does not change a ball’s size and shape — and thus, its aerodynamics — which seems to verify Kagan’s explanation for the humidor’s success.

Yet the pitchers might know something the scientists don’t. Former Rockies pitcher Shawn Chacon griped that pre-humidor balls were as slippery as pool balls, making it difficult to impart enough spin to execute breaking pitches. Lloyd Smith, a professor of mechanical engineering at Washington State University who tests bat materials, and physics professor Alan Nathan of the University of Illinois are investigating this effect and have qualitatively corroborated Kagan’s findings. “We’re fairly confident that the effects are small,” Smith says. “But in baseball, even small effects can be important.” Just ask the Rockies’ pitchers.

Ask Us Anything
Sports