The glove, still in its prototype stage, could prevent serious injuries in workers who handle toxic materials. 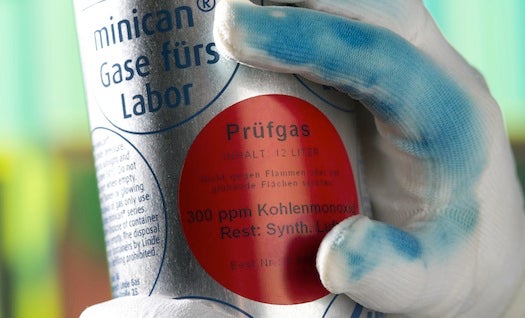 Think of it as a wearable (and less cruel) canary. Researchers have developed a prototype of a glove that changes color in the presence of airborne toxins, such as carbon monoxide.

Researchers at Fraunhofer, a research institution based in Germany, developed the glove for factory workers. It could be cheaper than sensing machines that some factories already use to warn of dangerous levels of certain chemicals. The researchers also imagined that color-changing fabric could work for a couple of other applications, too, including a detector for gas line leaks and packaging that warns you when food inside has gone bad.

The glove gets its warning color from a dye that reacts to chemicals in the air. Researchers are able to make the dye react to a few different chemicals. And they are able to apply the dye in the same way color is usually added to fabric. They can dip the fabric into a vat of dye, or silk-screen the dye on.

Next, the researchers want to integrate a small sensor into the glove that records the measurements it makes, or sends it measurements to a central computer.