Why NASA Should Get Out Of The Rocket Business

NASA's Space Launch System is set to be the most powerful rocket ever built -- and possibly their worst mistake yet. 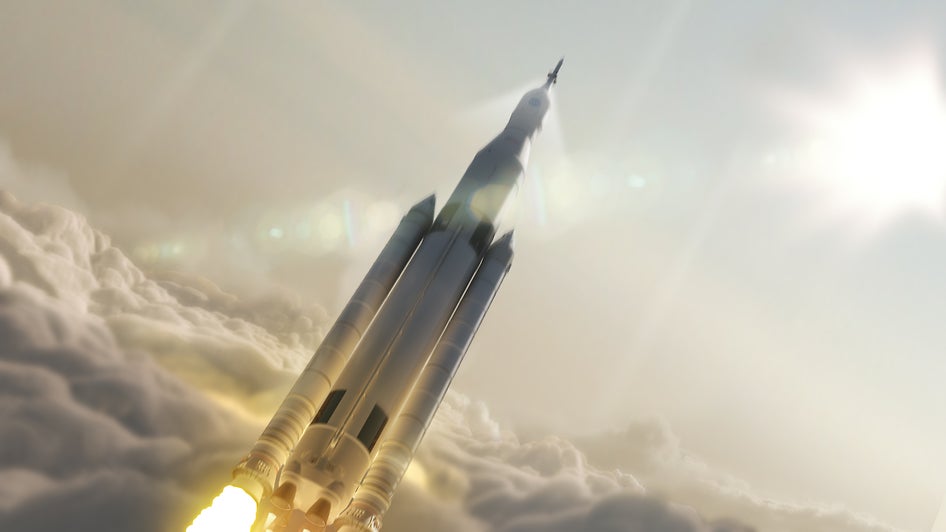 On September 12, NASA unveiled a remarkable device at its Michoud Assembly Facility in New Orleans: a gigantic welding system known as the Vertical Assembly Center. Standing at 170 feet tall and 78 feet wide, the VAC is the largest spacecraft welding tool in the world – and NASA is going to use it to build their next big rocket.

That rocket is the enormous Space Launch System, more familiarly known as the SLS. Expected to weigh up to 6.5 million pounds when it’s complete, the SLS is reminiscent of the old Saturn V rockets, with one long missile-shaped rocket body connected to two solid-fuel boosters. It’s a heavy launch vehicle meant to fill the void the Space Shuttle left behind, but with the aim of taking astronauts beyond lower Earth orbit, deeper into our Solar System.

“[The SLS] is a game changer in terms of deep space exploration and will launch NASA astronauts to investigate asteroids and explore the surface of Mars while opening new possibilities for science missions, as well,” NASA Administrator Charles Bolden said during the unveiling of the VAC.

“[The SLS] is one of the most hideous things I’ve seen in my lifetime.”

It all sounds beautiful and inspirational, right? As if the SLS is the fulfillment of all our space exploration dreams. Except… maybe not so much. Similar to NASA’s Asteroid Redirect Mission, a lot of experts hate the SLS program, claiming the rocket is doing the opposite of what NASA says it’s going to do. Rather than provide us with the means to explore our universe, they argue the SLS actually removes America from the space race — sidelining our astronauts entirely.

“It’s one of the most hideous things I’ve seen in my lifetime,” Howard Bloom, the founder and head of the Space Development Steering Committee, tells Popular Science. Recently, Bloom’s committee — which includes notable astronauts Buzz Aldrin and Edgar Mitchell, the sixth man to walk on the Moon – condemned SLS, calling it “a Franken-rocket designed by Senators to sustain jobs.” They maintain the SLS has been “shoved down NASA’s throat against its will.”

And they’re not alone. The Space Frontier Foundation, the Planetary Society and many space experts have called for the cancellation of SLS. Among their laundry list of complaints is the time it’s going to take to build it. America has had almost unfettered access to space since the 1960s, but with the cancellation of the Space Shuttle program in 2011, it has been three years since astronauts have launched into space on American vehicles – and SLS could make that wait even longer.

As of now, the SLS is slated for its first test flight in 2017, when NASA will launch a 70-ton version of the rocket, equipped with an unmanned capsule known as the Orion Multi-Purpose Crew Vehicle. Eventually, NASA hopes to send astronauts along in the Orion, but those flight aren’t expected to happen until 2021 at the earliest. That means it’ll be at least seven more years before manned missions on NASA vehicles happen again.

Another gripe of the Space Development Steering Committee is the SLS design. “It’s largely pieces based on Shuttle technology that have been cobbled together,” Bloom argues. And it’s true that the rocket’s technologies have been seen before. The core stage rocket essentially contains a modified Space Shuttle External Tank, and the attached solid rocket boosters are the very kinds used on the Shuttle missions. Plus, when you compare the SLS to the Saturn V rockets, it can be hard to tell them apart.

But perhaps their main issue with the SLS rocket is its cost. According to a federal audit by the Government Accountability Office, just to get the SLS to its first 2017 launch is going to cost a whopping $12 billion. And beyond that, NASA doesn’t know how much more it’ll need. The space agency is hoping that once SLS is flying regularly (about once a year), each launch will cost $500 million, potentially making it a little bit cheaper than the average Shuttle launch. But Bloom says that’s a far too optimistic estimate.

Even with that small financial benefit, the money just isn’t there. The same GAO audit found that NASA is running about $400 million short of reaching their 2017 goal, and NASA launch officials have admitted there is a 90 percent chance that they’re not going to make their first test launch date. But if NASA somehow gets the money to finish SLS, the exorbitant costs will consume a huge portion of NASA’s resources, eliminating funding for other projects that could greatly benefit a Mars mission.

“To do a Mars program, you need around 11 categories of vehicles and structures that are necessary — to get from Earth to Earth orbit, to get from Mars orbit to the surface of Mars, to manufacture fuel from Martian water, etc.,” Bloom says. “You’re going to need all of these tools, and there is zero money being spent on them, because SLS is eating all the oxygen in the room.”

So with all this criticism, why is the SLS program even happening in the first place? To understand its origins, you have to go all the way back to 2004, when President George W. Bush set a brand new policy for NASA. In January of that year, Bush asked NASA to come up with a plan for going back to the Moon, since the International Space Station would soon be complete and the Shuttle program was set to retire in 2010.

The result? The Constellation program, the successor to Shuttle that would take astronauts to the Moon by 2020. The project planned to exploit existing Shuttle technology to build two new launch vehicles called the Ares I and the Ares V. Both rockets were designed to launch separately and rendezvous in space, bringing together their own individual cargo. The Ares V was designed to carry heavier equipment, like a lunar lander, while the Ares I would bring up the astronauts in a NASA-made crew module called the Orion.

Critics were divided on Constellation. It had been dubbed “Apollo On Steroids” by Michael Griffin, NASA’s administrator from 2005 to 2009. While Griffin meant the phrase to be a positive association, many saw it as a pejorative term, denoting NASA’s tendency to get stuck in the past and fail to move forward with new technologies. Others, including many former astronauts, expressed their approval of a Moon return, which WRITE SOMETHING.

Then, amidst the Constellation debate, the nation switched presidents. In 2009, the Obama administration created the Augustine Commission, which was tasked with evaluating the United States’ current plans for spaceflight. After a six month review process, the committee released its report in October of 2009, saying, among many other findings, that the Constellation program was so behind schedule and so over budget, that it was impossible to complete. Consequently, the administration pulled the plug on the project.

Meanwhile, the Shuttle program was still slated for retirement, now for 2011. Soon, NASA would be left without a primary directive — and many were worried.

“You had the Constellation program suddenly being terminated, and you also had the Shuttle program coming to an end,” says James Muncy, TITLE. “So you had literally 10 to 20,000 people whose jobs depended on the Shuttle program, and those jobs were going away unless you had a new program to move people onto.”

Additionally, the employees who had been diligently working on Constellation for the past few years weren’t going to go down without a fight. In an effort to save the Ares I and Orion Crew Capsule that they had worked on, a number of NASA employees redesigned Constellation, repurposing many of its part into a new heavy lift vehicle. Thus the SLS was born, so say Muncy and Bloom, to save the Constellation program and save the thousands of people who were about to get axed.