Popular Drug-Trafficking Website The Silk Road Shut Down By Government 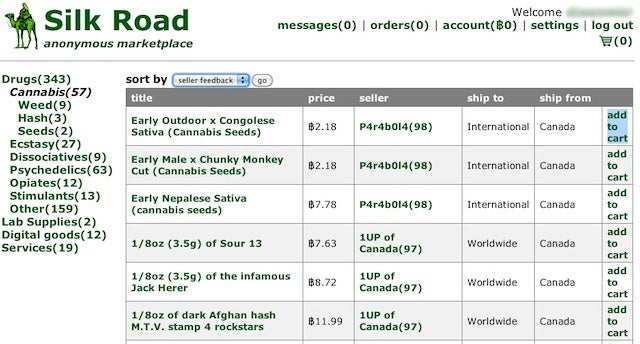 The U.S. Department of Justice today filed a criminal and a civil suit against one Ross WIlliam Ulbricht, who is accused of being the kingpin of anything-goes online marketplace the Silk Road. Want to buy some guns? Some heroin? A hitman? (Yeah.) The Silk Road was your Amazon.com. But not anymore.

The Silk Road is a site in the so-called “Deep Web,” a term that refers to internet properties that can’t be found or accessed through ordinary means like searching on Google. The Silk Road was never indexed; it could only be accessed through Tor, an anonymizer, so that all browsers, potential sellers and buyers alike, could use the site without fear of being identified. The Silk Road flouted laws; it described itself as a libertarian organization in opposition to substance control laws, among many other laws. Purchases were done with Bitcoin, a digital crypto-currency which is also anonymous and basically untraceable.

Ulbricht is also known, according to the filing, as Dread Pirate Roberts. According to reports, Ulbricht was arrested by the FBI at his home in San Francisco after law enforcement had spent months actually using the Silk Road to prove that it wasn’t some scam or prank. A great quote:

There’s also a crazy story in here about a Silk Road user who was threatening to reveal the names and purchase history of other Silk Road users. Apparently Ulbricht had tried to hire a hitman to murder this rogue user. Ulbricht managed to exchange money for this murder, but no murder was done, so no charges were filed.

The government also seized a cache of Bitcoin worth about $3.6 million at the moment–the USD value of Bitcoin fluctuates wildly–making this the biggest Bitcoin seizure of all time. According to Reuters, the government seized control of the “wallets,” basically digital bank accounts used by Bitcoiners. The four counts on which Ulbricht is being charged are as follows: narcotics trafficking conspiracy, computer hacking conspiracy and money laundering conspiracy.

You can read the full filing here.