From the first days of amateur biotech, hackers have reverse engineered cheaper alternatives to pricey lab equipment. The most prominent... 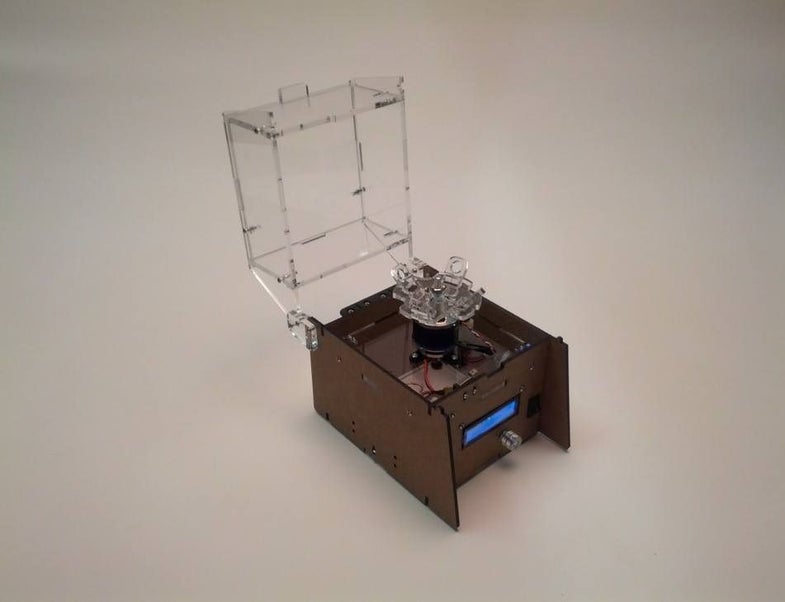 From the first days of amateur biotech, hackers have reverse engineered cheaper alternatives to pricey lab equipment. The most prominent has been the OpenPCR, an inexpensive version of a DNA copy machine, which is used in every molecular biology lab. Hacks of other lab staples have slowly trickled out. But until now, the centrifuge, one of the key pieces, has stubbornly lingered on the hacker wish list. To separate cells, DNA, proteins, and other materials from the soup of stuff they’re usually found in, the centrifuge requires high-speed spin, and early DIY attempts have been messy, and painful even. Finally someone has produced an exquisite centrifuge for the lab bench–17-year old high schooler Karlin Yeh.

Yeh hacked what he calls the OpenFuge from a friend’s broken remote control helicopter and his dad’s laser cutter. “I want to make it so every DIYbio hacker has a centrifuge that they can do experiments with,” says Karlin.

Clocking in at 9,000 r.p.m. and producing 6,000 g’s, the OpenFuge exhibits lab-grade power. And while the professional equivalent costs well over a thousand dollars, it only costs $200. Yeh has already sold out of kits on Tindie for $260 each, but you can still make your own with his step-by-step guide on Instructibles.

“Other DIY centrifuges I found were 2×4 planks stuck with holes in them,” says Karlin. “I wanted to make something that would work in a professional lab.”

The OpenFuge emerged out of a workshop on hacking lab equipment at Genspace community lab last fall. Since age 15, Yeh’s been visiting the Brooklyn lab after high school in Livingston, New Jersey. Karlin had his eye on the fuge. “It gets the most action out of all of the lab tools,” he says.

“The best way to make progress in biotechnology is if everyone contributes. For that everyone needs a biolab at home,” says Karlin. “I’m hoping this is a first step in the biorevolution.”