Nearby Earthlike Planet Is Made Of Diamond

New research says the planet has no water and is made primarily of carbon. It also shows that planets can be more complex to study than stars. 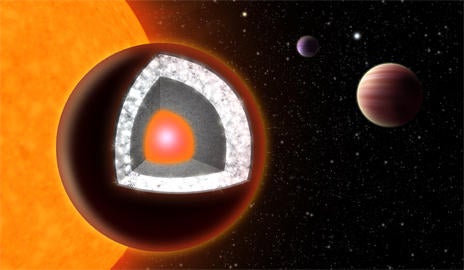 A super-Earth-sized exoplanet in a nearby planetary system is likely made mostly of carbon, which means it is made partly of diamond, according to a new study. The main reason this paper is interesting: It upends the assumption that distant rocky planets might have similar chemistry to Earth. But also: A diamond planet!

The planet is called 55 Cancri e and is one of five worlds orbiting a sun-like star about 40 light years away. Its radius is twice that of Earth but it has eight times Earth’s mass, and it screams around its star every 18 hours. Also, its surface is about 3,900 degrees F. Other than that, though, this planet initially seemed like it might be similar to our own. But astronomers’ early assumption that it had water now appears incorrect.

Yale postdoc Nikku Madhusudhan and colleagues confirmed that substantial amounts of carbon and silicon carbide were in its solar neighborhood when the planet formed. They also measured its size, which allowed them to infer what it’s made from by calculating all the possible combinations of ingredients that would yield a planet of that size and structure. It’s mostly graphite and diamond, with some iron and possibly some silicates, they say. At least a third of its mass, so about three Earths’ worth, could be diamond.

Perhaps someone should tell the folks over at Planetary Resources, who are planning to hunt down asteroids and mine them for a variety of material.

The findings show that astronomers studying distant rocky worlds should not assume they’ll be Earth-like, Madhusudhan said. A paper describing the planet was just accepted for publication in the Astrophysical Journal.