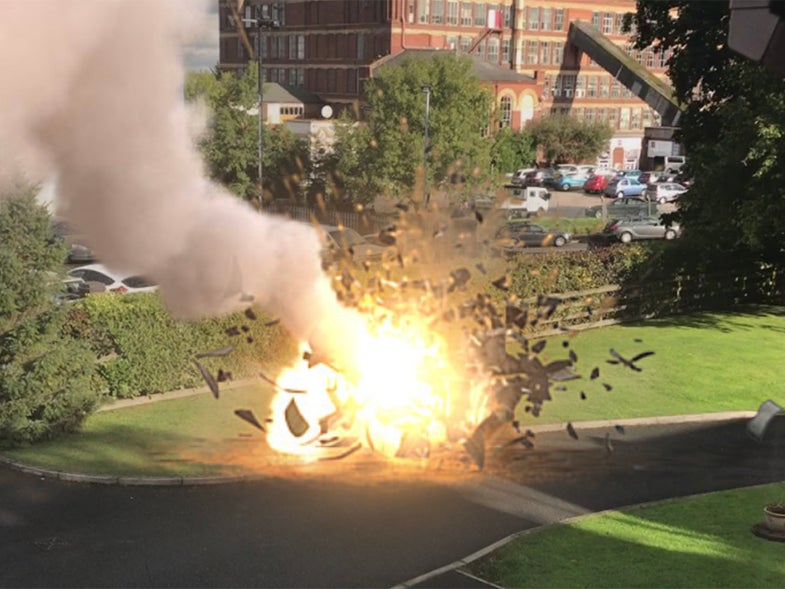 The smartphone revolution hasn’t just put a video camera in your pocket. It’s given you a whole movie-making studio in one compact package. With the right apps, you can add special effects and filters that the Hollywood experts would be proud of—and you don’t even have to transfer your footage to a computer first. In this guide, we’ll take you through six apps you can use for the job. Whether you want to send a dinosaur stampeding through your scene or give your footage a woozy, dream-like effect, you’ve got all kinds of possibilities to play around with.

The clue’s in this app’s name: Action Movie FX can overlay explosions and monsters with such aplomb that it’s previously earned an Apple award. From natural disasters to wandering spaceships, it offers a ton of high-quality visuals to explore, though most of these effect packages require an in-app payment. That said, you do get some effects for free—look for them under the All menu—so you can see how the app works on your clips before you start paying.

One of the reasons we like Action Movie FX is that it guides you through the process of filming your footage and then adding your effects. For example, during filming, you can have the app show a target on screen where imagery of a missile attack will appear, so you can arrange your scene accordingly. The added clips and the associated sound effects are all very high-quality, and sci-fi fans can buy official Star Wars and Star Trek effects packs from right inside the app.

Fiery explosions, falling satellites, even invading alien armies—if there’s a stock video special effect you want to import, chances are FX Guru has something that fits the bill. You won’t get many effects for free, but the for-purchase packages focus on specific genres and topics, such as ghosts or dinosaurs, so a single pack will go a long way. That focus also means you won’t have to waste money on a bunch of unrelated effects.

One of the handier tools in FX Guru is the MotionMatch feature, which adjusts your effects overlay to move with the camera so it looks as realistic as possible. These effects really do look very slick and polished: Although you’re not going to see Hollywood-level quality from a smartphone app and a few taps on the screen, you’d be surprised how good these effects can look, especially considering how easily you can add them to your footage.

Free for iOS and Android, effects packs from $0.99 each

Video editing app Videorama does more than help you cut your footage: Special effects are a big part of its large repertoire of tricks. You can drop in everything from tornadoes to blood splatter to grenade bangs, and it gives you quite a few free effects to play around with before you have to pay for any additional visuals. This app focuses more on natural or man-made effects, so you’ll find fewer marauding monsters and flying spaceships.

Besides the effects, which are easy to apply, the app features plenty of other features. It lets you add background music, drop in text titles, record your own narration, load in sound effects (as it does with visuals, Videorama gives you a library full of audio), and more. With a straightforward workflow, from loading in your existing photos and videos to sharing your creations on social media, this app is well worth a try for smartphone movie makers.

The previous apps focus on dropping in dramatic explosions and CGI characters on top of your footage, but VideoFX Live is more about overlaying colorful filters on top of live footage before you share it. Think of it like shooting footage through your favorite Instagram filter. Whether you’re trying to make your movie look like it was filmed in the 1950s, or you want an instant psychedelic dream effect, VideoFX Live can help you.

This software is very simple to set up and use: You just open the app, choose your filter, and start shooting. It’s not the most sophisticated video tool out there—serious filmmakers will want something with a bit more depth—but to create quick and easy clips with a little extra pizzazz, this option is perfect. Some of the filters even add basic animations, titles, and frames on top of your footage, though again you can’t customize these effects very much.

Like Videorama, VideoShow provides a complete video editing package, with effects as an added bonus. This app does more than slap overlays on your footage, so you should check it out if you’re looking for something to take your smartphone clips to the next level. As far as specific effects go, you can instantly drop in some extreme weather, or a crashing meteorite, or a well-timed flash of light.

In addition to special effects, you can add narration, music tracks, text titles, and pre-packaged themes for your videos. The app can also trim, rotate, and zoom in on specific scenes. Finally, it lets you change the speed of playback and reverse individual scenes. Overall, you get a lot of advanced tools to help produce perfect clips. Despite its wide variety of features and functions, the app remains straightforward and fun to use.

Free for iOS and Android, effects packs from $1.99 each

Finally, our roundup ends with LumaFX. This app doesn’t drop car crashes or dinosaurs on top of your footage, but it does give you access to color and distortion effects that look like they were applied in a professional editing suite rather than on a mobile phone. You can change the mood of scenes, pull off crazy warp and distortion effects, apply color casts, turn your footage into a cartoon-style clip, and more. You operate all these features from a simple-to-use thumbnail dashboard.

Although LumaFX is not a full video editing package, it can still rotate and crop your clips, apply tints and fades, and trim scenes down to size. You can either experiment with your own settings (and save them for later use) or load one of the app’s existing presets and work from there. Unlike the other apps we’ve mentioned, you can’t try this one for free, but we think the quality of the app and its features make LumaFX worth the fee.