How To Build An LED Lightsaber [Infographic]

A fun DIY project--and no one's hand gets chopped off. 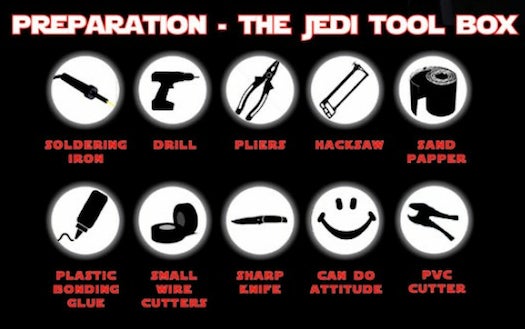 This infographic, created by Herbert Pocket, is a step-by-step guide for building a nerd’s dream: grab some PVC, spray paint, LEDs, and a few other DIY trinkets, then make a lightsaber.

There are a few tools in here not everyone is going to have access to (a soldering iron, for example), but if you’ve got them, it’s a relatively simple 22 steps to your sword of the future. Make the handle out of PVC, put on some spray paint for flair, and add LEDs for the glow. If you’re proficient with the tools, there’s also enough wiggle room in the instructions to personalize, letting you toy with the handle width and, of course, the color. (If Samuel L. Jackson can get an exception made for a purple saber, so can you.)

This would’ve been great for Halloween. But then again, maybe we want to wait until next year and plan a Darth Mickey costume around the Lucasfilm/Disney merger.

A Step-By-Step Guide To Lightsaber Building

How to build a Lightsaber

[Herbert Pocket via visual.ly via Instructables]