The Apple Watch ECG feature is now here. This is what you need to know.

The tech could be life-saving, complicating, or both. 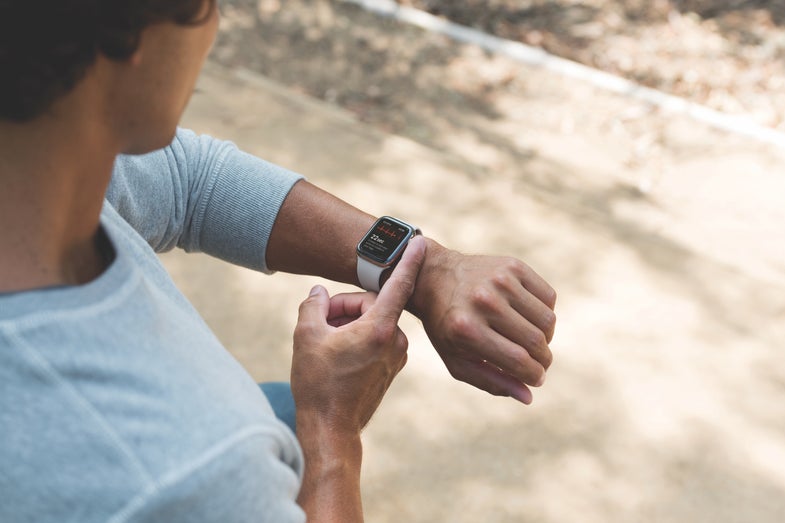 First announced in September, the ECG feature on the newest Apple Watch is now here via a software update. Apple
SHARE

Still wet from a swim, I placed my finger on the digital crown of an Apple Watch and took an ECG reading of my heart. Or tried to. The squiggly red line the test produced was—and these are technical medical terms—weird and messy. The ECG, or electrocardiogram, was inconclusive “due to a poor recording.”

First announced in September, the ECG feature on the Apple Watch is available today for everyone with a Series 4 device via a watch operating software update, 5.1.2. The function takes the form of a watch app, which you can also add to the watch face as a shortcut (or complication, in horological parlance). Launch the app from the home screen, or hit its corresponding complication, to take an ECG; over the course of 30 seconds, it will measure the electrical activity of your heart and screen for an irregularity called atrial fibrillation. The full results of the test will appear in the Health app on a paired iPhone, which you can then export as a PDF to share with a physician by email—or screenshot and share to Instagram or Twitter, if that kind of publicity gets your blood pumping.

Here’s what you need to know about the feature, including its potential advantages and disadvantages.

As we noted when Apple first revealed that the watch would be able to take an ECG, this new feature means the gadget is becoming a legit medical device. (Plus, it can detect falls.) It’s also not the only home ECG test out there: AliveCor already makes gizmos that take electrocardiograms, one of which is a band for Apple Watches.

As a relatively healthy person, I’m not the key customer for this feature. Apple does not intend the ECG to be something you do routinely when you are feeling fine. The company says that instead, it’s a resource for someone who may be experiencing a symptom like feeling a skipped heartbeat; after taking an ECG, a user has the chance to notate the test results with a symptom. “Rapid, pounding, or fluttering heartbeat” is one such option, as is “Fatigue.” Later, if you export the ECG reading as a PDF, that symptom will be listed at the top for context.

That set-up process, as well as the app itself, both clearly state that this feature cannot spot a heart attack. For that, you need a full ECG in a hospital, which uses 12 leads to measure your heart’s electrical activity in a more comprehensive way than this one-lead test does.

That said, to try the technology, I performed eight ECGs over the course of three days. All but the one I attempted after swimming showed a normal sinus rhythm, and also listed my average heart rate. In the initial process to set-up the feature—which happens via the Health app—Apple does explain that being wet or sweaty can compromise the quality of the recording and lead to inconclusive results, which explains my swimming snafu.

A sense of rhythm

If you remember your high school biology, the atriums are the top two chambers of the heart, while the ventricles are the bigger, bottom two. Atrial fibrillation is a problem with the squeezing motion of the atriums. “It’s almost tremulous and shaking—it’s not a cohesive unit that squeezes together,” explains Suzanne Steinbaum, who directs the women’s cardiovascular prevention, health and wellness program at The Mount Sinai Hospital. “And so what happens is, as it circulates, blood can pool in that atrium, and when blood pools, it clots.” That clot could cause a stroke, so an ECG test that can help screen for atrial fibrillation has an obvious advantage.

And there lies the life-saving potential of this gadget, and other home ECG tests. “If we can detect atrial fibrillation—which is a major cause of stroke in the US—before patients end up with a stroke, it could be very, very helpful,” says Adam Skolnick, a cardiologist with NYU Langone Health. A device that someone frequently has on them and screens for that is useful, because the condition isn’t always something a patient feels.

Somewhat confusingly, the Apple Watch has another feature, released today, that also focuses on screening for atrial fibrillation. Unlike the ECG app, this doesn’t require the user to put their finger on the digital crown—it uses the optical sensor on the back of the watch (the same sensor the watch has always used to measure your pulse) to look at your ticker’s rhythm. In fact, you don’t need the latest watch to avail yourself of this feature, and if you sign up for it, you could receive an alert when the timepiece thinks it’s seen signs of atrial fibrillation. While the ECG app measures your heart’s electrical activity—and gives you a PDF of the results to share—this notification feature serves simply to let you know you might have atrial fibrillation. What you do with that information is up to you: a logical next step would be going to the doctor for a professional evaluation.

To use either the ECG feature or the irregular rhythm notifications, Apple says you need to be at least 22 years old.

The potential benefits of a wearable device that can screen for a stroke-causing condition are clear. But having constant access to such a test could present challenges for patients and doctors alike, says Steinbaum, of Mt. Sinai, who argues that its responsible use will hinge on people have strong relationships with their physicians; she notes “growing pains” between the tech world and how healthcare is practiced in reality. One worrisome scenario she sees is someone using the watch ECG to diagnose themselves, then attempting to self-treat. (And just think of all the emails with ECG results that doctors could receive from concerned or confused patients.)

“We need to learn how to use this technology, and use this data, for the greater good of helping people better take care of themselves,” she says. “But without having that solid foundation of relationship between doctor and patient, I think it’s going to be hard.”

The rosiest outcome here would be a person showing their results to their doctor—who then takes action based on what they know as a trained physician—and a stroke is prevented.

“I know my patients are going to get this watch,” she says, adding that she hopes they use it in a collaborative way with her that spurs early diagnosis and treatment. “If we can do that as a team, I’m excited for it.”