Master odor removal with a little help from science

Get rid of that stink once and for all. 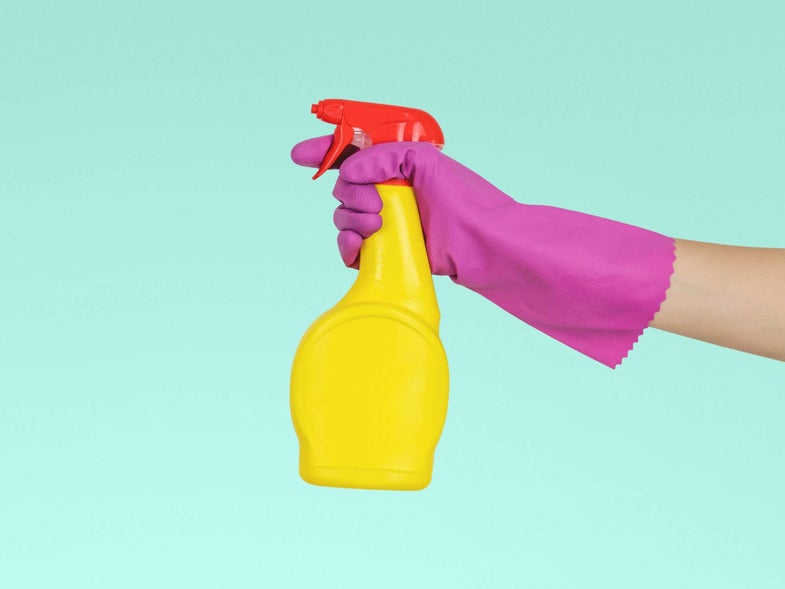 This post has been updated. It was originally published on 11/09/18.

We don’t usually think of our noses as delicate chemical sensors, but that’s exactly what they are. And big honker or petite button, our sniffers hate when bad odors linger nearby. Luckily, science can help you root out that foul stench.

Despite conventional wisdom giving all the credit to canine snoots, we humans also have an amazing sense of smell.

Any odor starts out as a volatile molecule—which means it can easily turn from liquid to gas—that’s looking for something to attach to. When you inhale, these molecules get inside your airways, and some get to the olfactory epithelia, a small patch of tissue called containing about six million olfactory sensory neurons. If the scent molecule is at least somewhat soluble in water and lipophilic (that is, it likes fats), it’ll attach to a light layer of mucus over these neurons, completing a connection that tells your brain just what’s in the air.

However, to humans, not all smells are created equal. We’re more likely to catch a scent from biological sources, such as organic matter, because our minds consider them more important as they may indicate disease. It’s not all bad, though—the smell of rain comes from bacteria in the soil doing nature’s trash-hauling by eating dead matter.

In another weird twist, because our olfactory system shares the same signaling channel as our sense of pain, we have particularly intense reactions to the malodorous. In other words, something can really smell so bad it hurts.

That said, scientists are still studying just why we scrunch up our faces at gym socks but follow our noses into the doughnut shop. To at least some degree, it appears our reaction to smells is not instinctive—we learn it. And with enough exposure, we can easily go “nose-blind” to even the worst stench.

But if smell comes from molecules entering our noses, why do some fragrances quickly dissipate while others stick around? That comes down to concentration.

Take cat pee, a notorious nasal horror. Felines boast incredibly efficient kidneys which even allow them to live on seawater if they need to, as they are capable of filtering salt. But that also means these furry pals fill their litter boxes with a highly concentrated solution, which includes a heavy dose of urea, a compound that forms when ammonia and carbon dioxide combine. The potent mix then wafts out of the litter box and assaults our faces.

Sometimes the liquids that transport smelly molecules can easily sink into all sorts of surfaces, which makes odors linger. Porous materials like wood and the fibers in carpets might hold onto fluids for months or even years. As long as ambient conditions let those volatile compounds turn to gases, the stink will stick.

Now that you know the science of smell, let’s apply it to that reeking part of your room.

Strike the source with an odor eliminator

When faced with a bad smell, your first step should be to get its source out of the surface where it hides. We’ve previously discussed how to banish stains from your floors and walls, and much of that advice will also apply to removing smells.

First, a quick review. There are five categories of cleaning agents: surfactants, weak corrosive agents like vinegar, oxidizers, enzymatic cleaners, and solvents. Surfactant molecules, for example, have a hydrophilic and a hydrophobic side, so they can attach to and remove messy stains and smells at the same time. Enzymatic cleaners, meanwhile, use specially-engineered blends of enzymes to attack specific types of stains and the stinks that go with them. However, you won’t want to use oxidizers like OxyClean and bleach to get rid of a smelly contaminant. These solutions remove stains by knocking out chromophores (the parts that absorb and emit light), and in doing so, they have no effect on the stench.

In some cases—especially with food spills and pet accidents—bacteria might be feeding off the substance. You can blame those little pests for emitting the offending odor, and if this is the situation, you should use a cleaner that also disinfects. While you’re at it, consider an enzymatic cleaner designed to break down that specific stain, such as Nature’s Miracle for pet pee and poop.

If you’re tackling just the faint hint of a smell, or applying the cleaner to a non-porous surface, these tactics will probably get rid of the offending substance. But if the malodorous source persists, you may never entirely banish it from your floors and walls. That said, you can leave the substance in place while taking a few steps to prevent its scent from bedeviling your nose.

If you fail to remove that smelly stuff, you can still neutralize it. Sometimes, when you’re dealing with a scent that’s stinky but not dangerous, this tactic may even be easier than scouring a stain. Odor compounds easily bond to other molecules, so certain substances will grab the offensive stuff out of the air before it reaches your schnozz. Take Febreeze, for example, one of the best-known odor neutralizers: it works by trapping scents in doughnut-shaped cyclodextrin molecules.

In an enclosed space, try baking soda, aka sodium bicarbonate. It became a back-of-the-fridge mainstay because it bonds with a lot of reek-causing chemicals, turning them from gross smells to less reactive salts.

Similarly, white vinegar can deodorize your entire house. Simply simmer the clear liquid for an hour, vaporizing the acetic acid it contains. Because acetic acid easily bonds with volatile molecules, a light mist of it will banish odor from your house. And the vinegar smell doesn’t stick around: Remember, it wants to bind with something, so it’ll get out of the air looking for it.

[Related: Can You Get A Smell Stuck In Your Head?]

For a real one-two punch, combine the white vinegar with baking soda. This makes it foam up, and you can use the reaction as a deodorizing cleaner.

With smells that hide in narrow spaces or between cracks, apply so-called adsorption agents. Adsorption is the process of pulling in a chemical, and you can think of these agents as sponges for reek. For example, activated carbon consists of pure carbon treated to give it as much surface area as possible, which turns it into a chemical buddy that grabs anything stinky and never lets go. If you can’t find any activated carbon, kitty litter will also do the trick.

Seal it off or exile it

If the smell lingers even after you’ve scrubbed the floors, simmered vinegar, and added enough carbon to create a black spot, then it’s time for drastic measures. You need to either seal the smell into the surface so it can’t escape or remove the odor-filled material altogether.

Sealing might be an option for floors, counters, and outdoor furniture. Look for a clear sealant or paint primer designed to prevent “off-gassing,” aka emitting rank vapors. These create an impenetrable molecular wall that locks smells inside the material they’ve already invaded.

But sealants may not be available for scent-saturated things like books and clothing. If your neutralization attempts fail, then you have two options: Put up with the smell or chuck the possession.

Odor doesn’t have to be a part of your life. With a little chemistry, and good old elbow grease, you can be completely free of it.