An ESA Satellite Was Hit By Space Debris

Sentinel 1-A is operating routinely, despite some damage to a solar panel 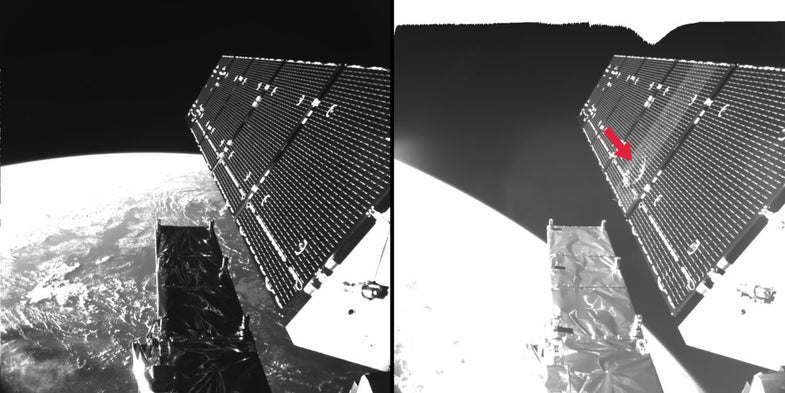 Before and after shot of the solar array struck by space debris on ESA's Sentinel 1-A satellite. ESA
SHARE

A piece of space debris has dinged the European Space Agency’s Sentinel-1A satellite, the agency reported yesterday. The particle struck a solar panel on the satellite on August 23, causing a small loss in power and slightly changing its orbit and orientation.

When engineers activated Sentinel-1A’s onboard cameras, they found a damaged area roughly 16 inches wide. This actual particle was probably less than a tenth of an inch in size, but would have been traveling up to about 24,000 miles per hour when it clipped the satellite. It’s not clear yet whether it was natural or debris leftover from human activities.

Fortunately, spacecraft are built to handle such impacts. Sentinel-1A, which is part of ESA’s Copernicus program to observe Earth’s environment, is operating normally, ESA said.