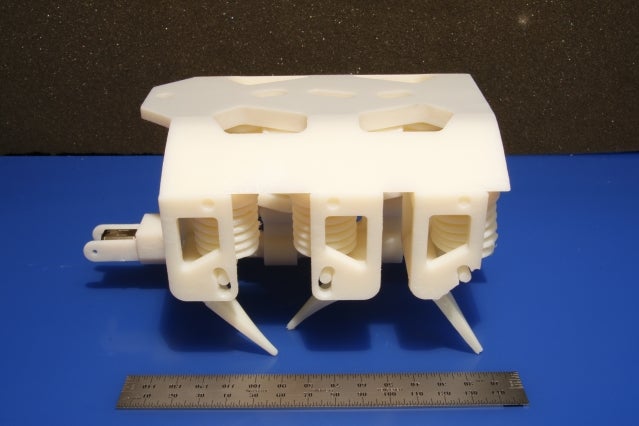 We watched the birth of the new machines. Planned in labs, the 3D printer gave them form, layering their bodies into being. The robots were softer than the ones we’d come to fear, their gently wriggling bodies more caterpillar than Terminator. Once it was removed from its mechanical womb, the creators hooked up some batteries and gave it the spark of life. And with that, it was off, walking into the world:

Made by MIT’s Computer Science and Artificial Intelligence Lab, this robot walks with hydraulic bellows, fluid pumping in and out to turn a crankshaft that moves the legs back and forth. All parts of the robot, apart from the batteries, wires, and motor, are 3D printed. That includes the liquid inside the bellows, which remains liquid while the rest of the body is solidified in printing.

Here’s how MIT describes the process:

The robot, as well as a 3D-printed soft hydraulic finger and claw, can be seen in action in the video below, and the full paper is here: