The Hood That Explodes For Safety

If you strike a pedestrian, this pyrotechnic-powered hood pops up to pack a softer punch 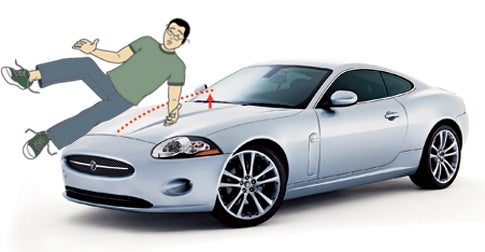 It sounds like something out of a Bond flick: a car with a hood that´s launched open by a pair of explosive charges. But Jaguar´s Pedestrian Deployable Bonnet System (PDBS) isn´t intended to thwart bad guys. Its purpose is to soften the impact on the unfortunate soul who gets hit by the European version of the 2007 Jaguar XK. PDBS is Jaguar´s response to new European Union legislation that requires automobiles to be gentler on pedestrians in the event of a collision (exploding hoods have not been greenlighted in the U.S.).

On impact, sensors in the bumper gauge an object´s size and weight. So hitting a trash can won´t trigger the system, but if a person is hit, two pyrotechnic charges at the base of the windshield inflate airbag-like posts, popping the hood. All this happens in 30 milliseconds-less time than it takes to look both ways.

You’ll need the QuickTime plug-in to view this video. Download it here for free if you don’t already have it installed.