The #IStandWithAhmed backers are living up to their promises 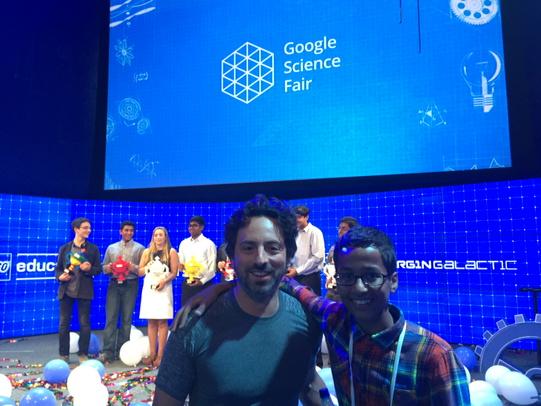 It was just over a week ago that 14-year-old student Ahmed Mohamed was arrested for bringing a homemade clock to his school in Irving, Texas (after school officials suspected it could be a bomb). Since then, the young inventor’s life has taken a turn for the better and more bizarre: people around the web offered an outpouring of support for him on social media under the #IStandWithAhmed hashtag, and numerous big names in science, tech, and politics invited him to visit with them.

Now it appears that those big names are following through on their invitations. Last night, Mohamed posted a tweet from his official Twitter account showing him in attendance at the Google Science Fair, smiling and standing beside Google co-founder Sergey Brin.

Today, Mohamed also followed up another tweet indicating his next stop would be the White House, following President Obama’s earlier invitation to come by.

His father said the family would travel to New York on Wednesday to visit with UN officials, according to The Guardian.

An online crowdfunding campaign started by his supporters to provide a scholarship for him and other minority students interested in the STEM fields (science, tech, engineering, math) has also continued to raise money and is now up to $14,000, though it remains well shy of its $100,000 goal (there are still 21 days left in the fundraising period, however).

The controversy surrounding Ahmed’s arrest has quieted since last week, but the accusations of racism and Islamophobia on the part of his school officials and local police still linger. Mohamed for his part previously announced he would be switching schools as well, presumably after he gets back from trip. He formally withdrew from his old school, MacArthur High School, today. Still, the major show of support by leading tech companies and politicians is a reassuring sign that Americans still value curiosity and want to encourage scientific exploration in young minds.