AMC’s ‘Humans’ Is Closer To Reality Than You Think

The new sci-fi cable show imagines a world of Synths, but it's not far from today 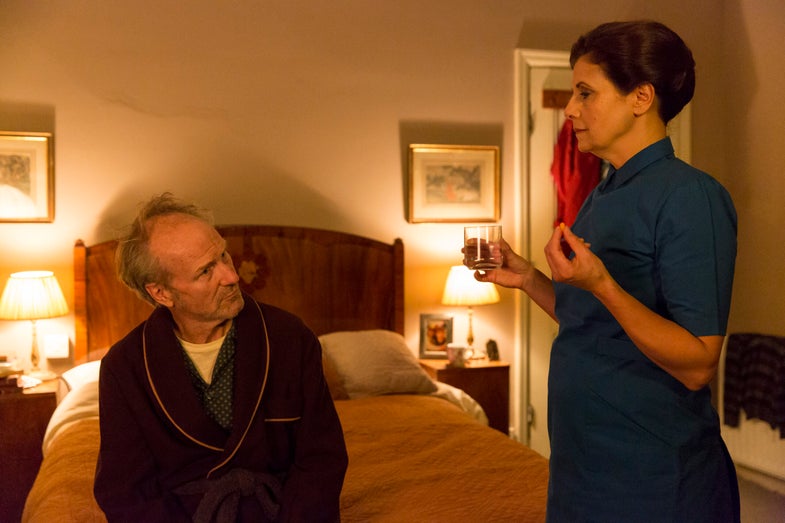 AMC’s latest Sci-Fi show Humans takes us into another world. A world, that….actually, looks incredibly familiar. The streets, the cars, the landscape, the computers, all seem pretty close to our world today. Except for, you know, the eerily humanoid robots that are there to serve humanity’s every whim.

Those robots, called “Synths,” are the centerpiece of a show that tackles our hopes and fears of artificial intelligence. It draws on the long tradition of humanoid robots in science fiction from the very recent (Ava in Ex Machina) to the iconic (Data from TNG , the various killer Terminator robots) and all the way back to the most influential — late sci-fi author Isaac Asimov, who is mentioned by name in the series.

Without giving too much away, in Humans the Synths are the latest must-have item for every home. They are servants that can be recharged instead of paid or fed. They can drive a car, do your laundry, clean your house, and even care for the very young or very old. They’re replacing people in many industries where they have become cheaper and more efficient than human labor. Unsurprisingly, some people like them, and some don’t. There’s also the mysterious plot involving some Synths that seem just a bit different from the rest, but underlying the more dramatic elements (which make it interesting TV) is a world and some elements of artificial intelligence that do seem to be just around the corner. But how close is that parallel present to our own world?

One very obvious advantage of making robots that look entirely human is that human actors can play the roles of Synths. But writers Sam Vincent and Jonathan Brackley had another, more symbolic motivation as well. The totally human appearance of the synths is a mirror of how the technological guts of many modern devices are completely obscured by lovely design.

“We can speak to our iPhones now, and you can interact with them in a much more human way,” Vincent says. “The corollary to that is that the actual technology is being kept further and further away…we‘re more removed from whats going on in the little black box.”

The decision to make the Synths appear as completely human (with the exception of the light green eyes) was meant to imitate the trend of making technology as pretty and easy-to use as possible. And making robots that look like humans is actually possible in our world. Hiroshi Ishiguro has created Geminoid robots designed to look exactly like people. And for the most part they do…as long as they aren’t moving too much.

Unlike in the show, realistic human movement is still out of reach for many robots today, because they just don’t have the same kind of body that we do. Humans have the advantage of hundreds of muscles in the human body, all able to move in specific ways that we take entirely for granted. The most advanced robots don’t have nearly that many controls built into their face, legs or arms, so while they can approximate human movement, like walking along a street, they aren’t going to be able to do it in quite the same way.

“It’s like if you’re playing a piece on a piano with 88 keys, and then you try to play the same thing on a piano with just 10 keys. It’s going to sound different,” robotics expert Chris Atkeson says.

Atkeson has been studying humanoid robots at Carnegie Mellon institute for years and is no stranger to the challenges of making a machine move like a human. Atkeson’s team entered a robot into this year’s DARPA robotics challenge that (unlike a few others) did NOT fall down or need human assistance, thankyouverymuch.

But even though human robots are slowly getting more agile, on of their main advantages is that by figuring out how to make a robot move, we can get a better idea of how people move as well. One of the ways Atkeson is using the robots developed in his lab is to look at how older people move and fall, in the hopes of helping to develop technology that can prevent injuries related to falling.

One of the central characters of the show, played by William Hurt, is assigned a Synth to assist him as his health is worsening. Having a robot carer makes it possible for Hurt’s character to stay in his house, which brings up an interesting question; could a humanoid robot take care of you in the near future?

Atkeson says probably not, or at least not something that looked human. Artificial intelligence is getting better, and having devices that can help remind people to take their medicine and give basic instructions or warnings about possible dangers is within sight, probably in the form of a phone or tablet. But to have a robot capable of moving around the house and assisting you there needs to be a lot more developments in how robots move and perceive objects. “You need something that was smart enough that would know all items in your house,” Atkeson says. And most importantly, any robot that people allow into their homes is going to have to be extremely safe.

Atkeson was also a consultant for another recent robotics movie, Big Hero 6, and says that a soft body like Baymax, or a Nerf-like material might be a better option for people to have around the house than a heavy robot. A child runs into Baymax, they’d bounce off. A child runs into a 300 lb robot and gets crushed…catastrophe.

But What About The Jobs?

Caretaking definitely isn’t the only area where human jobs could be edged out by machines. When he was doing research for the show, Brackley says he and Vincent visited robotics conferences around the globe, where the economic implications were at the forefront of everyone’s mind. And the idea of robots taking over for people’s jobs is a huge source of anxiety for several characters in the show, as well as making plenty of headlines in the real world.

While developments in artificial intelligence could displace desk workers, and mechanical robots could take over manual labor, it’s unlikely that either would need to look like a human to do it. Computers and computer programs might take over the white collar jobs, while the machines that we’re already building to take over agricultural jobs (like picking apples or digging a ditch) look nothing like people, for one simple reason; “Humans are not good ditch diggers” Atkeson says. There are much more efficient machines capable of doing the work, unencumbered by a human shape.

But just because they don’t look like humans, doesn’t mean they aren’t coming for our jobs. So should we be worried? Maybe a little. But let’s not panic yet.

“We were very upset about this 250 years ago with the mills and mechanical looms and we had the Luddites smashing the machines taking their work,” Vincent says. “And actually, in a way, I kind of feel it’s a testament to the power of human adaptation. So many people do still work, but it is obvious that more and more jobs are not going to be exclusively done by humans in the near future.”