Fecal Transplants Are Nothing To Be Sniffed At 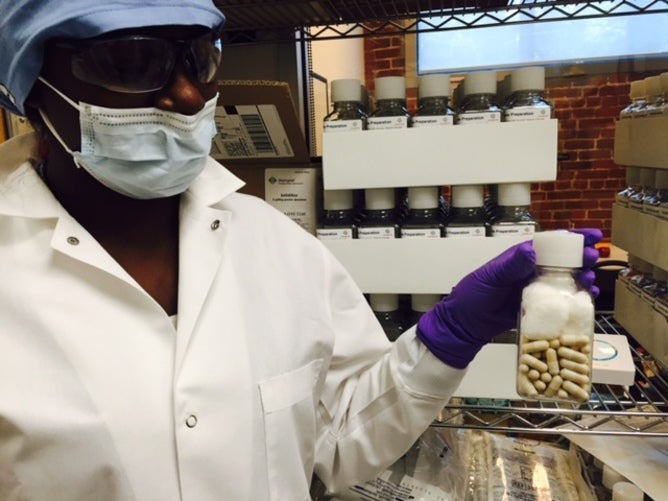 Most of us will have experienced diarrhoea or Delhi Belly and spent an unpleasant 48 hours in bed or on the toilet, often while travelling. Studies show that if severe, these infections can sometimes change your gut microbes permanently. And rather than sitting it out we are increasingly turning to powerful broad spectrum antibiotics that kill the infectious bug – but these can also cause collateral damage and weaken our resistance to recurrences.

Five years in the future we could be popping capsules to cure us and reboot our healthy gut community made up of our frozen poo we stored when we were healthy.

Last week I visited the labs of the world’s biggest poo bank run by a not-for-profit company OpenBiome in Boston. They currently ship out more than 50 frozen poo samples a week to 430 US centres for treating a life threatening infection called recurrent Clostridium difficile, also known as C.diff infection or CDI, caused by antibiotics that affects about 100,000 Americans and kills 14,000. CDI is usually caused by an initial mild infection followed by recurrence in one in four patients, because of treatment with antibiotics that destroy the diversity of the normal gut microbes and allow the C. diff to flourish.

The traditional treatment for CDI is usually powerful antibiotics. However, a summary of three randomised control trials and more than 500 treated patients, and a resulting commentary in the BMJ, concluded that poo transplants – where liquidised stool (or its frozen microbial content) from a healthy donor is used in the colon of the patient to introduce healthy microbes – had more than an 85% success rate, compared to only 20-25% for the antibiotics.

One study stopped early as they viewed it unethical to continue with antibiotics. So far from more 6,500 supervised transplants in the US very few adverse events have been reported even in the very ill, immune deficient or very elderly.

Poo transplants have been around since 4th century China but most doctors had not heard of them until the first trial was published two years ago. Faecal Microbial Transplantation (FMT), the official name of the treatment, and the process is quite simple.

At Openbiome, a healthy donor is chosen after a rigorous series of questionnaires and clinical tests on volunteers that eliminates 97% of candidates hoping to make easy money. So the dozen or so super-donors are in high demand. Their stools are diluted and a cryopreservative added so it can be safely frozen. It is then packaged three ways: either for a concentrated mixture to send down a tube through the nose into the stomach; a larger amount for use during a colonoscopy or enema to introduce via the rectum; and finally a new product being launched this week – 30 acid resistant capsules (nicknamed crapsules – which appear to work nearly as well) and reduce medical procedures.

Faecal microbial transplantation for C.Diff infection has now been cautiously endorsed by medical specialist groups and in the UK by the National Institute for Clinical Excellence although national regulatory bodies have struggled with how to classify it. Are the microbes in our stool a tissue a medical device or a medicine? As our bowels contains ten times more microbial cells and 150 times more genes than in our bodies – is it really ours to begin with?

In the US and UK it is not being classed as a tissue (like blood transfusions) but as a medicine with a series of discretionary exemptions to allow it to be used.

Other countries are way behind the US. In the UK there are only around seven centres (including one private) and current regulations strangely prevent the import of frozen US samples. The demand from clinicians and public for FMT is growing for other common diseases and traits linked to altered gut microbes, and clinical trials are already ongoing for Crohn’s Disease, Colitis, Irritable Bowel Syndrome, and autism. It may also be useful in severe allergies and other immune diseases and even has potential in assisting chemotherapy.

Probably the number one question is whether FMT could treat obesity. The only proven long-term treatment for severe obesity and diabetes is bariatric surgery where pieces of the intestine are removed and reattached. There is increasing evidence that change in microbes could be responsible for its rapid clinical benefits. There is now clear evidence that FMT can treat and prevent obesity in lab animals but preliminary trials in obese humans have been disappointing: although FMT improved insulin sensitivity, weight didn’t change much. So far we still lack good evidence from proper trials for all these other common diseases and the consensus is that they will be much harder to treat than for C.Diff.

At large centres like Openbiome, risk of infection is minimised by lab screening and keeping samples for three months and checking donor health again before use, however there are other potential risks. There are a handful of reports of FMT recipients for severe infections who recovered and then gained substantial weight, possibly transferred from their overweight donors. Nowadays obese donors are excluded. Our gut feelings and anxieties may come from a range of key neurochemicals that our microbes produce, including dopamine, and serotonin. Studies have shown in mice that anxiety can be transferred by microbes. Mental health checks may need to mandatory for future donors.

There is a worry that faecal transplantation could now be seen as a cure-all for every human ailment. We are still ignorant about doses and timing and our ability to change a stable well-balanced gut environment. We may also need to match up donors and recipients as for other transplants, because our gut microbes are to some extent influenced by our own genes and our microbe community is unique to each individual.

In the future we will probably be using much safer donors – ourselves. We will be banking our own stool samples when we are healthy for later use. These are now being used in high-risk patients prior to bone marrow transplants. However bizarrely although it is legal in the US to store your own samples, you can’t re-implant them into yourself without a complicated medical trial exemption certificate.

This is a rapidly moving field that is no longer just a joke for thousands of patients whose lives have been saved, and we urgently need more studies, experts and sensible but flexible regulations. The public is increasingly sceptical of drug-driven cures and urgently need access to good advice, reliable microbial testing and safe alternatives.

DIY transplant procedures with instructions on the internet are proliferating rapidly as alternatives to traditional medicine, and without reliable data on safety and efficacy this is likely to muddy the murky waters even further. In the meantime, perhaps we should all be freezing some of our poo while we are healthy and storing it for a rainy day.