Studies using fecal transplants to treat inflammatory bowel diseases suggest some poop may be better than others. 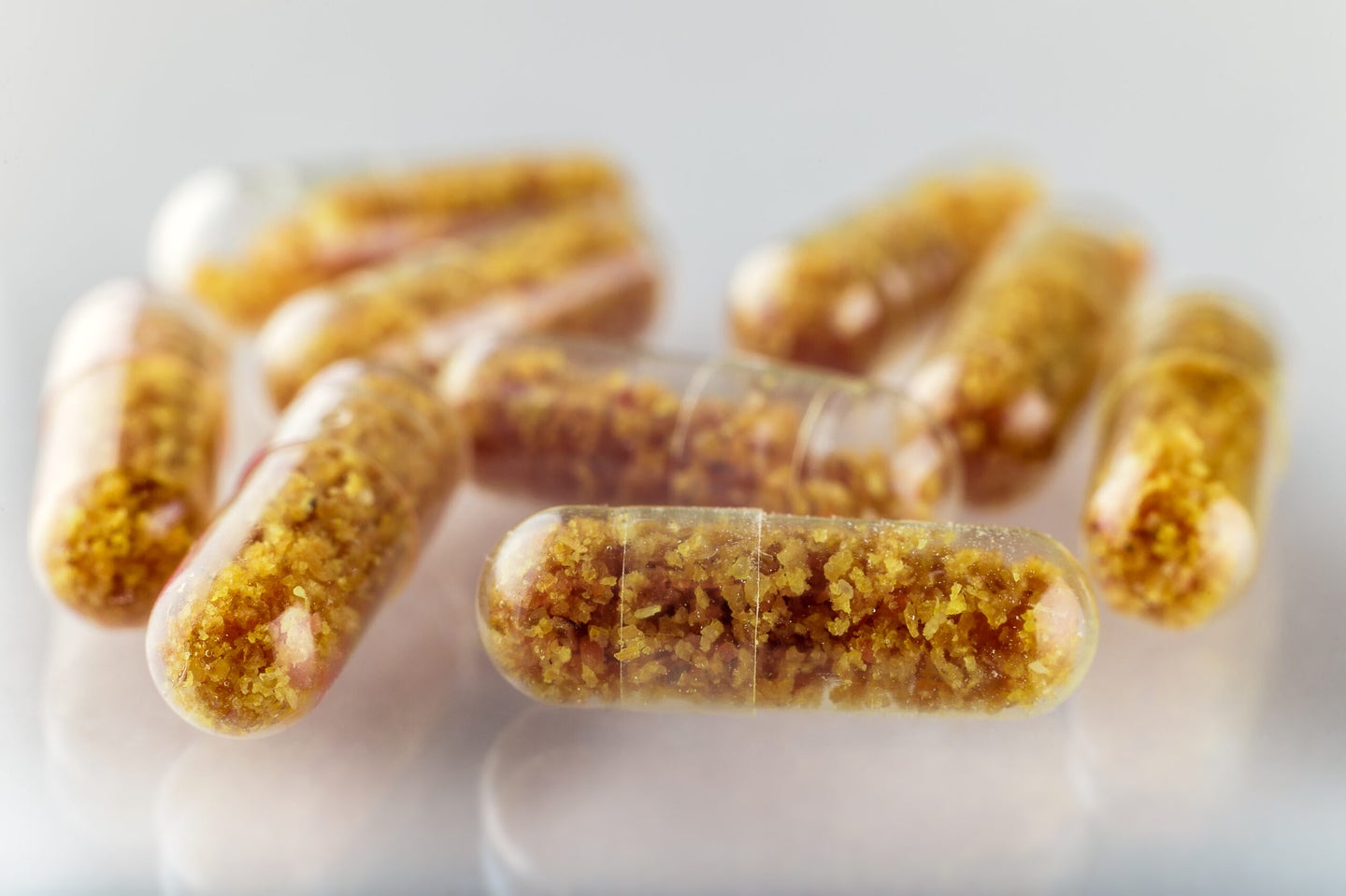 For over a year, Sydney Snyder was pooping up to 30 times a day. She’d been given an aggressive regimen of three different antibiotics to treat an earlier stomach infection, but the drugs did their job a little too well. The antibiotics wiped out a huge chunk of her gut flora, and in the resulting bacterial vacuum a new problem emerged: Clostridium difficile, also known as C. diff.

The bacterial strain is infamous for causing excruciating and even deadly gut infections. The pain and disruption C. diff wreaked on her life forced Snyder to quit her job, and she even moved to Santa Fe in the hope that living “stress free in this good vibe town” would help her get better. But, she says, “that doesn’t treat C. diff, so that didn’t work.”

What typically does successfully treat C. diff is, ironically, the exact thing that caused it: Broad-spectrum antibiotics. Snyder went through four separate rounds of this treatment, but each one just made the condition worse. Finally, an infectious disease specialist suggested she might be a candidate for a fecal microbiota transplant, colloquially known as a poop transfer, or an FMT.

The idea is to replenish the gut microbiome with a wide diversity of bacteria that compete with C. diff for resources, keeping the species from replicating out of control. The procedure involves administering a processed stool sample from a healthy donor into the patient’s intestine, typically via colonoscopy. For Snyder, the treatment was a lifesaver: In the days following the transplant, she says she didn’t have diarrhea for the first time in a year.

FMTs were new and taboo when Snyder received one in 2013. Now, over five years later, the procedure has proven so successful at treating C. diff infections—by some estimates up to 90 percent effective—that researchers are testing its potential therapeutic value on other gastrointestinal conditions. Frontrunners are inflammatory bowel diseases, such as Crohn’s disease and ulcerative colitis, in which gut bacteria might play a key role. So far, though, attempts to treat these diseases using FMTs have been inconclusive, and remission rates (where the disease becomes inactive) hover around 25 percent.

Some researchers think the key to success may lie in the donor’s stool. It turns out that when it comes to treating certain diseases, not all poop is created equal. Figuring out what makes for superior stool could help scientists identify these so-called super poopers and increase the treatment’s likelihood of success.

Research suggests that dysbiosis, or an imbalance of certain bacterial families, might play a partial, if not pivotal, role in both the development and severity of Crohn’s disease and ulcerative colitis. In tandem, a few recent studies have found that the more diverse the stool donor’s microbiome is—that is, the greater the number of different bacterial species living in the gut—the greater the likelihood of success for the recipient. In one case, only 9 out of 38 ulcerative colitis patients improved from the treatment, but 7 of those 9 responders received a transplant from the same donor.

Together, these discoveries have led Justin O’Sullivan, a molecular biologist at the University of Auckland in New Zealand, and others to put forth the idea of a “super donor” whose microbiome contains the right mix of microbes to turn a diseased gut into a healthy one.

“With some diseases…there seems to be a change in the diversity of the microbiome that correlates with those syndromes. That’s a really interesting thing because it may be that in some of those instances the microbiome is actually causative,” says O’Sullivan. “[If] we restore the microbiome to a so-called healthy state, that may alleviate or prevent a condition developing.”

Alan Moss, an associate professor of medicine at Beth Israel Deaconess Medical Center who performs FMTs, agrees with this idea. “Based on a couple of observations, the profile of [donors with] successful outcomes looks different to the profile of donors for maybe not so successful outcomes,” he says. However, he’s quick to add that scientists have not yet formally tested this theory. “All we have now are observations that yes, maybe diversity is better, but it’s not been proven.”

So, what makes a poop super?

To be a fecal matter donor in the first place you already need to have a superior gut. At OpenBiome, the sole U.S. stool bank that provides samples for most of the transplants, requirements include the obvious: no family history of inflammatory bowel disease or colon cancer, no frequent stomach issues like bloating, constipation, or diarrhea, and no recent antibiotic use. But they also screen for autoimmune and mental health conditions like depression, anxiety, asthma, and allergies, which have all been potentially linked to the microbiome.

“Our donors, they go through a pretty rigorous screening process; overall the pass rate is just under 3 percent,” says Majdi Osman, the clinical program director at OpenBiome. “We always joke here that it’s harder to become a stool donor at OpenBiome than it is to get into Harvard.”

Right now, beyond the rigorous health screen, scientists aren’t exactly sure what they’re looking for in a donor, which makes identifying super stool difficult. No one strain of bacteria ensures a healthy gut. In fact, entire families of bacteria are present in one seemingly healthy person and absent in another. The only thing that healthy guts seem to all have in common is diversity—the more bacterial strains, the better.

The other clue researchers have comes from looking at what’s missing in unhealthy guts. People with ulcerative colitis are often deficient in a type of short chain fatty acid called butyrate. The human digestive tract can’t extract nutrients from fiber, so it reaches the colon unscathed. At that point, bacteria finally break it down, producing short chain fatty acids in the process. These fatty acids do a number of useful things in the gut, and butyrate in particular helps reinforce the intestinal wall and stem inflammation. In one study, ulcerative colitis patients who had higher post-FMT levels of butyrate-producing bacteria fared better than those with lower levels.

Following this line of thinking, Moss recently attempted an FMT trial to treat Crohn’s disease that cherry-picked the best of the best from the OpenBiome bank, which contains samples from 40 to 50 donors at any given time. That’s a relatively small sample size, but those lucky bunch have already made it through OpenBiome’s stringent 3 percent acceptance rate, meaning roughly 1550 people didn’t make the initial cut. From that group, Moss selected donors who had high levels of short chain fatty acids (including butyrate), high bacterial diversity, and anti-inflammatory signals, such as cytokines, which studies have also found play a role in the immune response and ensuing inflammation associated with inflammatory bowel diseases. Just three people’s samples met Moss’s criteria. Results of the trial are not yet published, but he hopes his study, and others like it, will help researchers know once and for all whether super poopers exist—and how to find them.

How to improve your poop

With all this focus on super poop, you might be wondering what you can do to boost your own gut health. Daniel McDonald, scientific director of the American Gut Project, doesn’t think there’s any evidence “that you can take a particular action and boost levels of a particular microbe in your gut.” But he does say that eating a lot of plants and fiber is probably a good thing.

The American Gut Project is a crowd-funded citizen science initiative housed at the University of California, San Diego. Anyone can send in a sample of their poop and $99, and in return they’ll receive a summary of the types of microbes present and how they relate to the rest of the population. Combing through the 10,000 samples submitted, McDonald discovered that people who ate more than 30 different types of plants per week had very different microbiomes than people who ate only a few plants, particularly for bacteria that produce short chain fatty acids.

As for so-called probiotic foods like yogurt, kimchi, and kombucha, researchers say they may temporarily raise the levels of one or two specific bacteria, but as soon as the food is out of your system, so is the microbe. “Most of the probiotic field is marketing,” says Martin Blaser, a microbiologist at Rutgers Medical School. More than diet, some researchers, including Blaser, say a bigger determinant of your microbiome could be your early environment—where you were born, how you were born (through the birth canal or by caesarean section), and your mother’s microbiome, which is passed on to you.

What might bring about more research on what constitutes super poop would be to get more people to participate by normalizing conversations around digestion and stool. After receiving the fecal microbiota transplantation to treat her C. diff infection, Snyder—now an art teacher—dedicated herself to destigmatizing intestinal illness, fecal transplants, and poop at large. She started an Instagram account about the topic and exhibited an art show, Poojazzle, of glitter paintings depicting her poop at the University of Southern California Keck School of Medicine for their Patient Experience Collective on Art.

“It was like, I have this mission and I want people to know about it and destigmatize poop,” she says.