What To Expect At Apple’s October 27 Event

The new MacBook will have a magic toolbar, leaks show 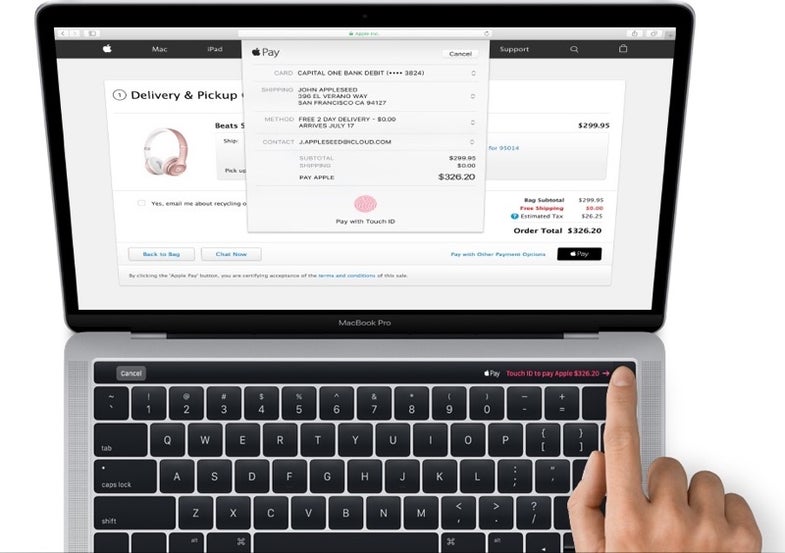 Having introduced the new iPhone last month, Apple is ready to update another part of its product line: Mac laptops. Few outside of Apple can say for sure what the company will bring on stage in Cupertino on Thursday, October 27. But the most prominent rumors point to the company introducing updates to its portable computer hardware. Now Apple’s own software confirms exactly this.

A hawk-eyed MacOS Sierra user noticed a hint: the latest version of Sierra, 10.12.1, contains images of the company’s next laptop computers. The new Macbooks won’t have individual e-ink keys just yet, but seem to offer a touch panel, reportedly called the Magic Toolbar, as well as a Touch ID fingerprint sensor.

Presumably the touch panel will allow for toggling volume or adjusting brightness. During specific moments, however, it’s likely that the touch-enabled bar could change depending on the task being carried out.

Different apps could change what appears on the toolbar based on commonly used tools. Photo and video editing apps, for example, could provide a different set of keys than when gaming, for instance.

The photo also seems to indicate that the touch panel incorporates a fingerprint sensor. In the image, the panel prompts the user to place a finger on the sensor to make an online purchase.

The leaked bird’s-eye-view image shows a Macbook with speaker grilles on the sides. This could very well be the “Pro” edition of the current 12-inch Macbook that offers USB-C.

What Else Can We Expect?

The rumor mill promises three new notebooks at the October 27 event. But the company could introduce smaller updates across their other lines of products as well. Considering past October events have been dedicated to the iPad, we might see Tim Cook and company update the tablets. Much of what Apple announced at the iPhone event last month, like the company’s latest smartphone and features like portrait mode on the 7 Plus have made their way to consumer hands, though certain gadgets like the AirPods remain holdouts. Those will likely receive a firm release date on Thursday.

And, if we’re lucky Apple could polish up its desktop computers. The Mac Pro, which hasn’t been updated in over 1,000 days, could finally see some love. Unless there are more secrets tucked away within Sierra, we’ll have to wait until Tim Cook hits the stage on October 27.

Stay tuned to PopSci for updates on Apple’s event!