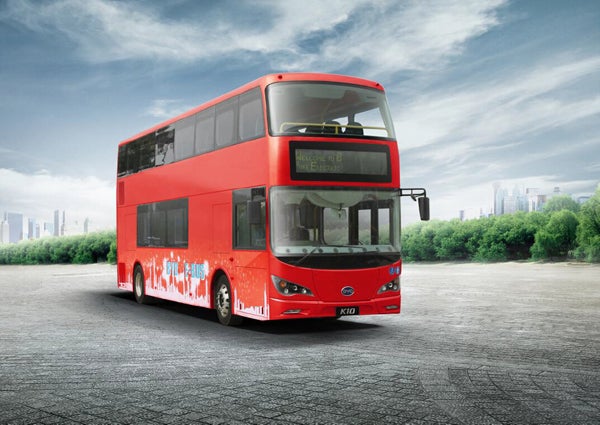 The new buses will be green in spirit, if not in color. BYD
SHARE

In terms of iconic city sights, London’s double-decker bus is right up there with Paris’ Eiffel Tower. And with the Eiffel Tower adding wind turbines earlier this year, it’s no surprise that London is also going green, but not with envy.

In October, London will start running on a single route, making Londoners breathe a little easier. Like all electric vehicles, the bus will have no emissions. The announcement was made at the first ever Clean Bus Summit held in London last week. At the summit, 24 cities from around the world promised to put 40,000 green buses on the roads within the next five years. London plans to convert all it’s single-decker buses (around 300) to electric models, and make sure that all the 3,300 double decker buses are at least hybrid vehicles by 2020.

The new electric buses will be manufactured by Chinese company BYD, which has already built (single-decker) electric buses for 150 other cities around the world. This will be the first double-decker bus expressly designed to be powered by electricity. But it isn’t the first to run completely on electricity. As The Guardian pointed out, earlier this year York beat London to the punch, retrofitting an existing double-decker sightseeing bus to run on electricity.