Watch SpaceX Test Its Parachutes For The Crew Dragon

It'll look even prettier when there's a real Dragon 2 attached 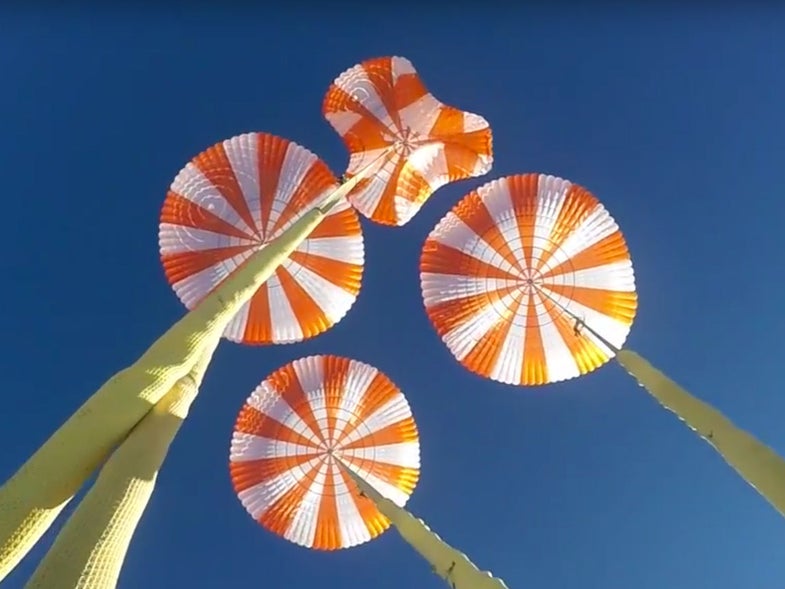 SpaceX is one of two companies vying to become the first to carry astronauts to the International Space Station in 2017 (…or maybe a little later).

But the Dragon 2 (a.k.a. the “Crew Dragon”) — the gumdrop-shaped capsule that will carry up to seven astronauts inside — will have to come back down to Earth sometime. After reentering the atmosphere, the capsule will deploy several parachutes and then splash down in the ocean, and NASA just posted a video of the parachute tests (above).

The test didn’t include a real version of the Dragon 2, instead relying on a weight that presumably costs a lot less than a capsule mockup. It also didn’t include all of the chutes a full landing system could use, according to a NASA blog. Baby steps!

The weight was dropped from an airplane and the four parachutes deployed successfully, proving the hardware is reliable.

SpaceX performed similar tests on the original Dragon capsule, which the company currently uses to ferry cargo to and from the ISS.

Eventually, SpaceX wants to achieve more controlled landings using thrusters, and last week, it posted a new video of a successful test of those thrusters.

The tests have showed SpaceX’s crew systems operating well so far, which is great news not only for the future of human spaceflight, but especially for the four astronauts who have already committed to being the first human volunteers for such a mission.