The 10 best science images, videos, and visualizations of the year

These are the 2017 winners of the Vizzies Challenge. 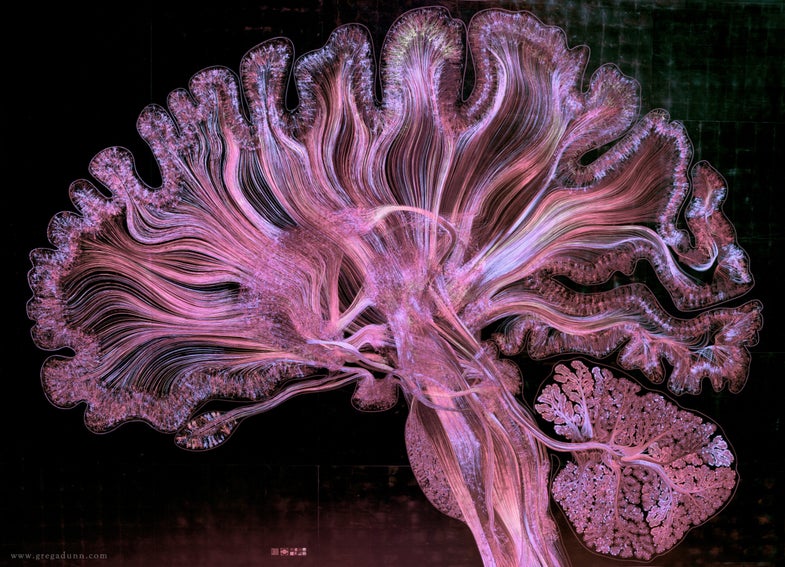 Self Reflected Under White, Red, and Violet Light. Greg Dunn, Brian Edwards, and Will Drinker
SHARE

Note: The National Science Foundation is now accepting entries for the 2018 Vizzies. Got an incredible visualization of a scientific concept? Submit your project!

We are all too aware of how hard it can be to explain science. Describing concepts, theories, processes, and phenomena use up a lot of words—and even after careful consideration those words can fall short. That’s why for the last three years Popular Science has teamed up with the National Science Foundation to honor the best science visualizations out there.

As part of this year’s Vizzies, we’re highlighting an intricate illustration of brain neurons and a visual explainer of humming bird tongues. We’re celebrating a lexicon of American Sign Language and a photo of how hungry starfish larva move the water around them.

How did we select the best of the best? Experts selected by the National Science Foundation judged hundreds of entries on their impact, ability to make a complex subject easier to understand, and originality. This panel of experts pared down the list to 50 finalists—10 illustrations, 10 interactive designs, 10 photographs, 10 posters and graphics, and 10 videos. Those 50 visualizations were put up for public review. The final result: One experts’ choice winner and one people’s choice winner per category.

These are our winners: 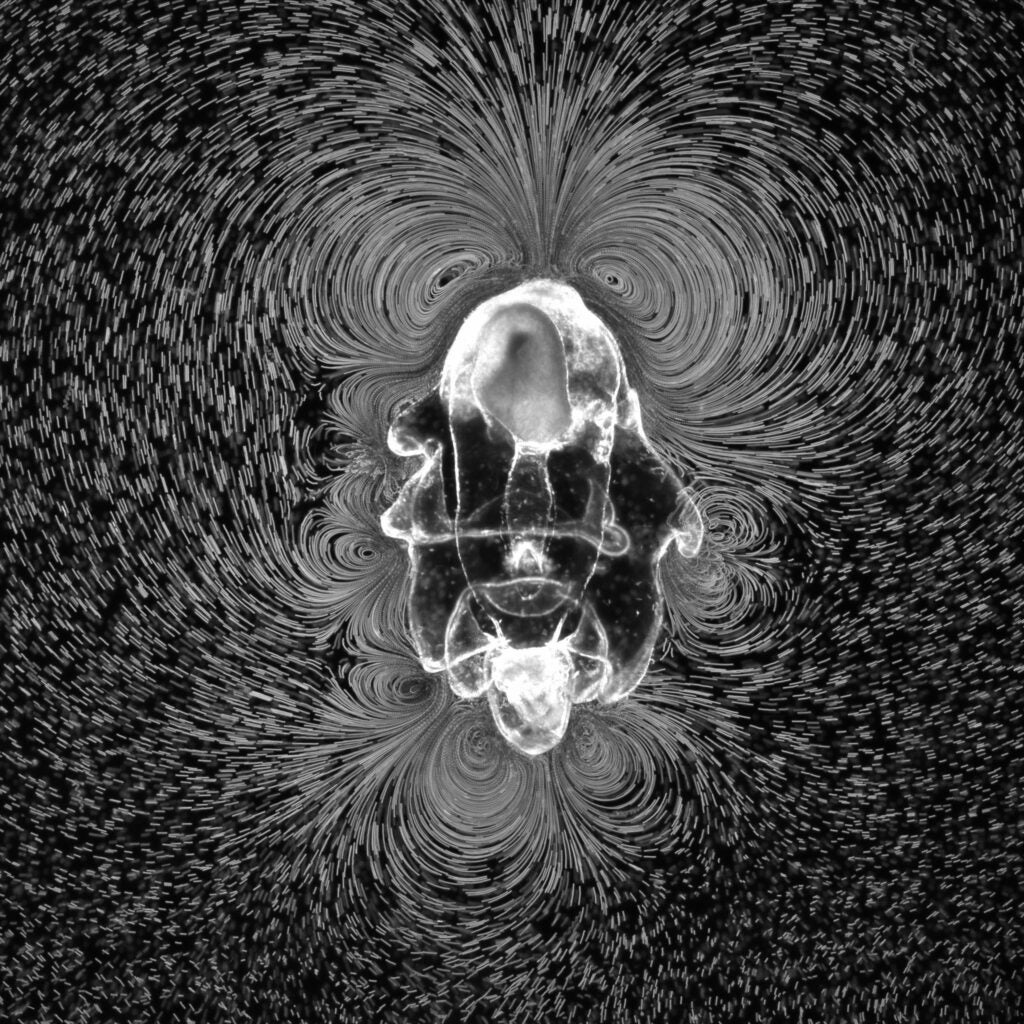 The “Hungry Starfish” is a fundamentally Californian product. William Gilpin, a PhD candidate in physics at Stanford University, found out the school was offering classes at its marine village on the Pacific Ocean. So he and his fellow researchers headed out, ready for a break from the lab. What they ended up finding surprised them: starfish move using hundreds of elaborate, tube-like feet, and they also seem to control the waters around them.

When they headed back to the lab, they found very little research had been done on the way starfish move the water around them, so they set about finding—and illustrating—the answer themselves. “Hungry Starfish” is essentially an elaborate time lapse photo, created when all of the vortices the starfish makes were imaged and combined into one surprisingly delicate image of the starfish’s superpower. Those vortices aren’t just for fun: they’re for softly pulling algae into a starfish larva’s tiny mouth. 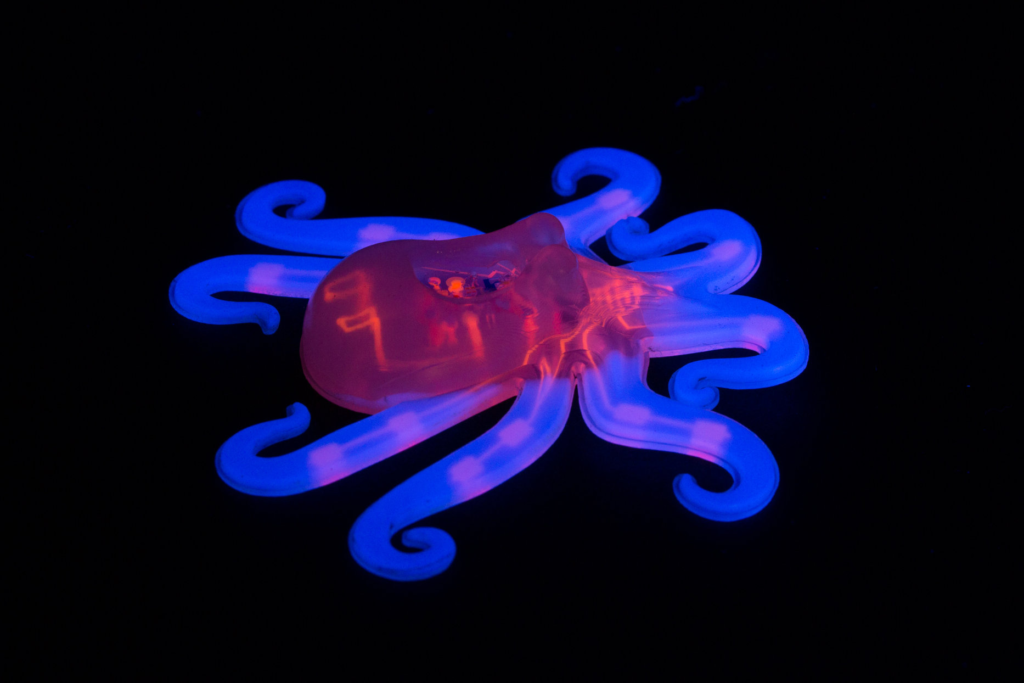 The Octobot, A Completely Soft Machine

Soft robots—ones made entirely out of squishy materials—are about to take over. They’re theoretically safer and more resilient than metallic mechanoids, but scientists haven’t quite figured out practical ways to make every part of a robot mushy. Octobot is a step (or eight) in the right direction: it’s entirely soft, powered by chemical reactions that push fluid and gas into its limbs.

As Harvard researchers worked to design the bot, they frequently used fluorescent dyes to better visualize its intricate inner-workings. “To us, these dyes always made the 3D printed Octobots so beautiful, and we thought that they would make for an awesome photograph,” says study co-lead Ryan Truby, a PhD candidate in applied physics. “We hope our photograph will appeal to the imaginations of both academic and broader audiences interested in robots and inspire a vision of future entirely soft robots like the Octobot.” 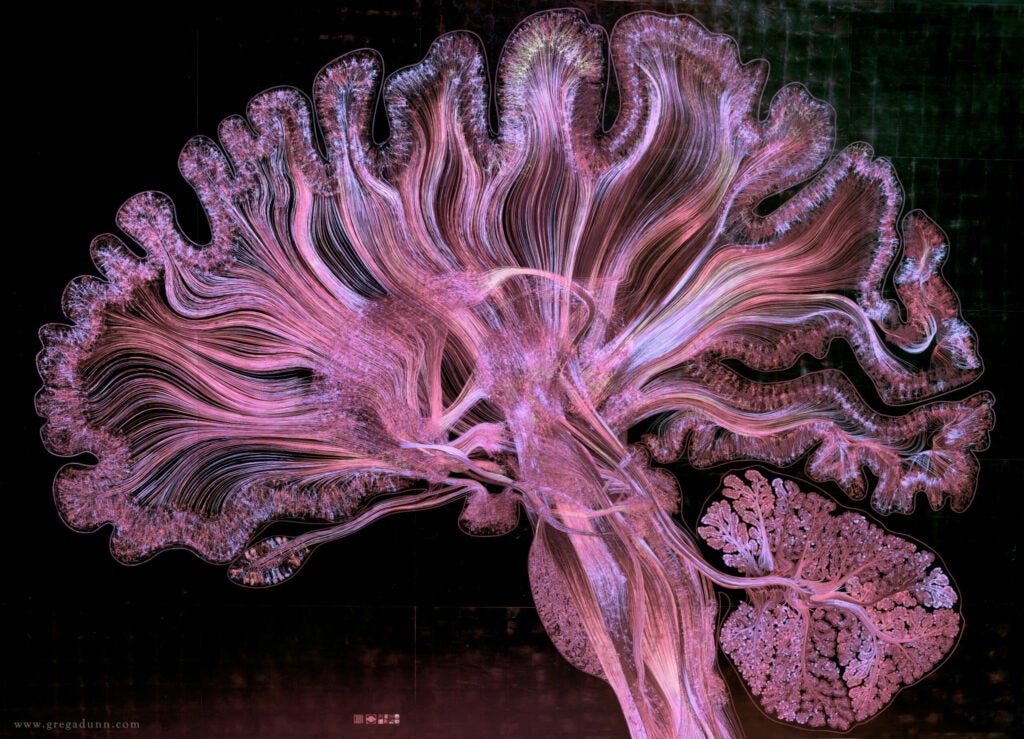 Self Reflected Under White, Red, and Violet Light

It took data from “essentially dozens if not hundreds” of scientific sources to create this intricate image of the brain, says team lead Greg Dunn, a neuroscientist at the University of Pennsylvania.

Combining hand drawings, optical engineering, gilding (the process of etching into gold), and other artistic and technical processes, they created this depiction of about 500,000 neurons hard at work. It’s “a reminder that the most incredible machine in the universe” is inside each of us, the team wrote.

Self Reflected was featured at the Franklin Institute in Philadelphia, with the goal of prompting viewers to consider what looking at an elaborate representation of the brain looks like from inside the brain. In addition to this image of the full brain viewed from the side, Dunn’s team generated a variety of other works with different focuses and resolutions. 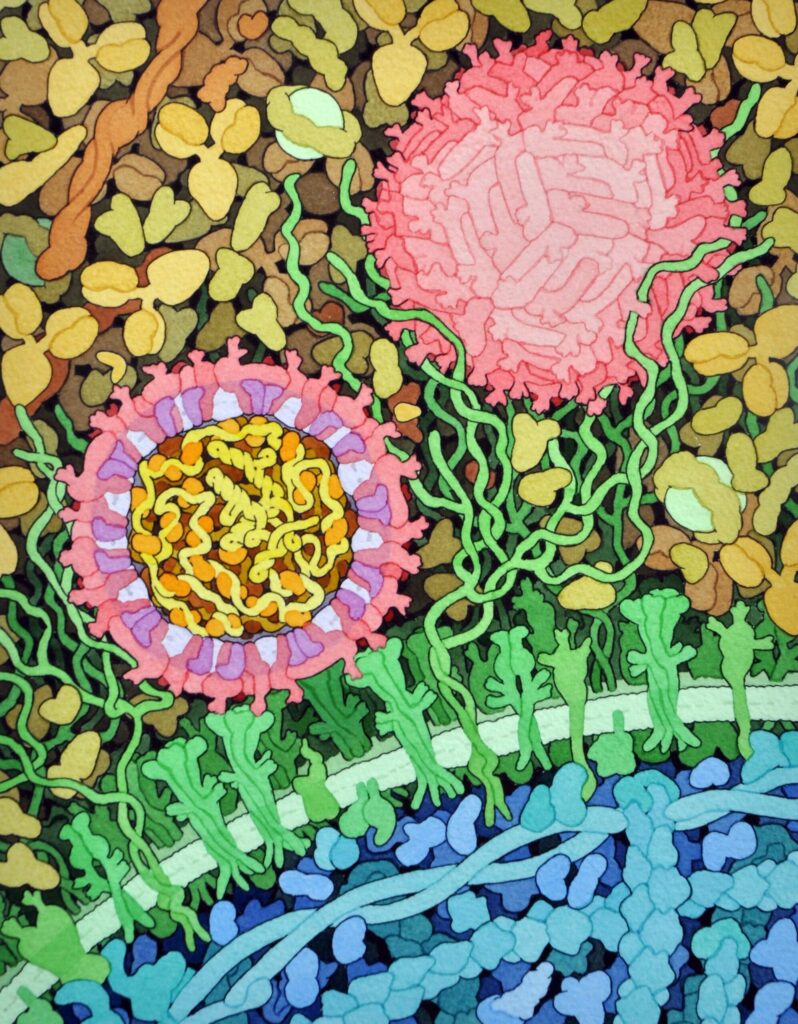 Every month, the RCSB Protein Data Bank shares a “Molecule of the Month.” This zika virus had the honor of being the featured image for May 2016.

The zoomed-in illustration reveals something of a topographic map of the infecting agent. It shows not just the envelope that encircles the virus, but also the RNA (in yellow) that lives inside it and allows it to replicate. When the image was first published, scientists had been aware of the virus for almost 70 years, but understanding of the disease was limited. “Study of Zika virus has gained new importance because of the recent spread of the virus in many countries around the globe and its connection to birth defects and a rare neurological disease,” the illustrator wrote at the time. 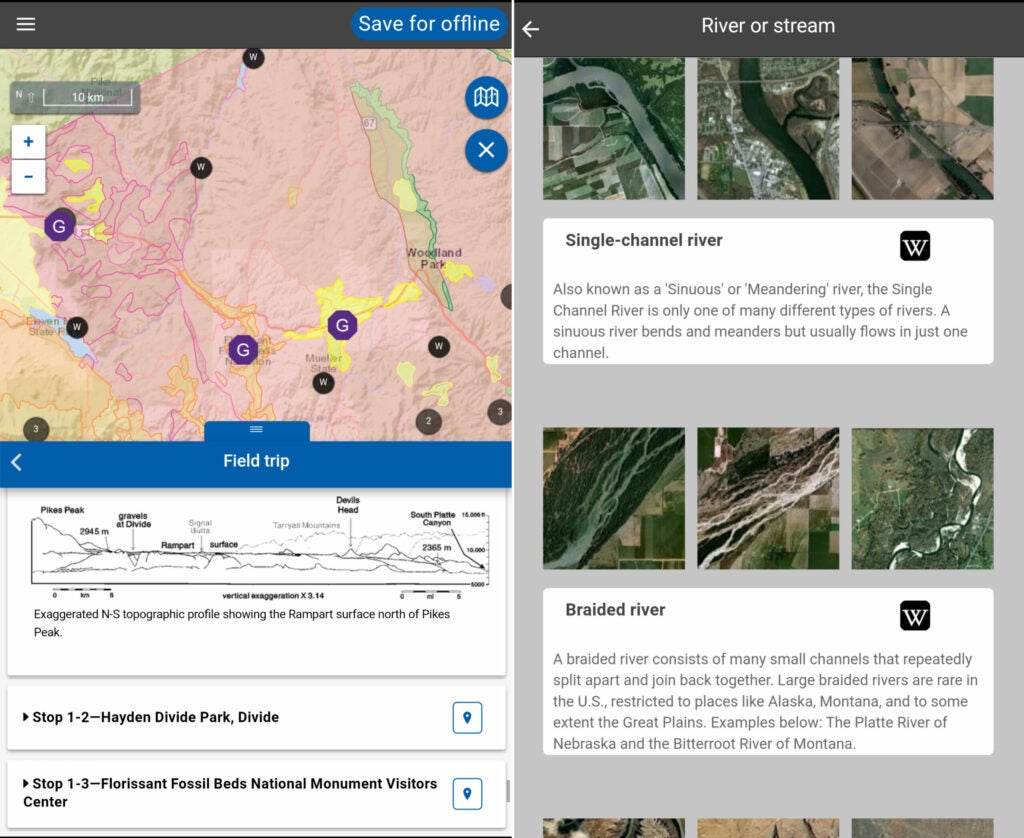 Shane Loeffler started working on his app, Flyover Country, when he realized his undergraduate studies in geoscience at the University of Minnesota provided him with a unique—and entertaining—view on flying.

“I was flying over the San Rafael Swell,” he says, “and I could look down and I had been down there hitting those rocks with hammers, and now I’m above, reading a Wikipedia article [about the features below].” The app uses GPS signals to show people the topography of the land beneath them, as well as special features, like sites where dinosaur fossils are embedded in the soil. Loeffler, who is working with a small team to further develop the app, says it can also be used to enhance hiking and camping, road trips, and other more earth-bound activities. 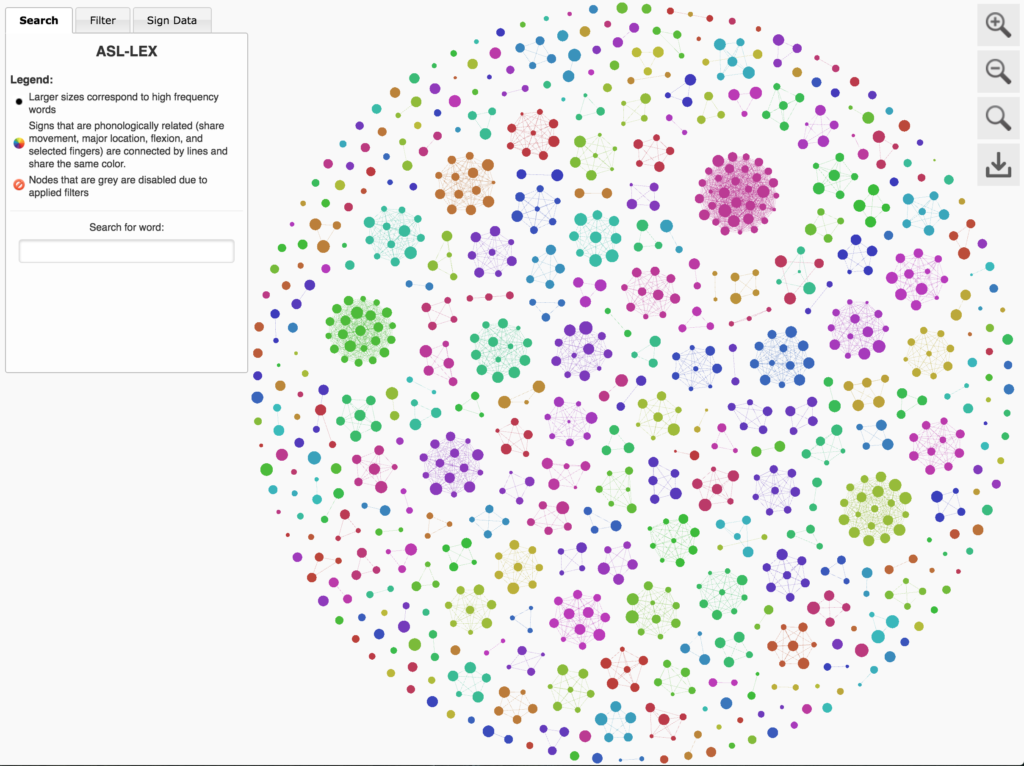 American Sign Language is a language like any other—but it can’t be easily organized like a traditional English dictionary. This and other barriers make it hard for parents of deaf children to aid them in language acquisition, says Naomi Caselli, a lecturer on Deaf Studies at Boston University’s School of Education.

Caselli and her team decided to take all of the ASL data available to them and organize it in a new way. ASL-LEX organizes 1,000 signs into groups based on things like similar hand shape or movement. What’s more, these little nodes are sized according to their common usage, so words like “book” are a little easier to find than a word like “castle.” It’s already helping hearing teachers and parents communicate with deaf children, and Caselli says the researchers are working hard to ensure that trend continues. 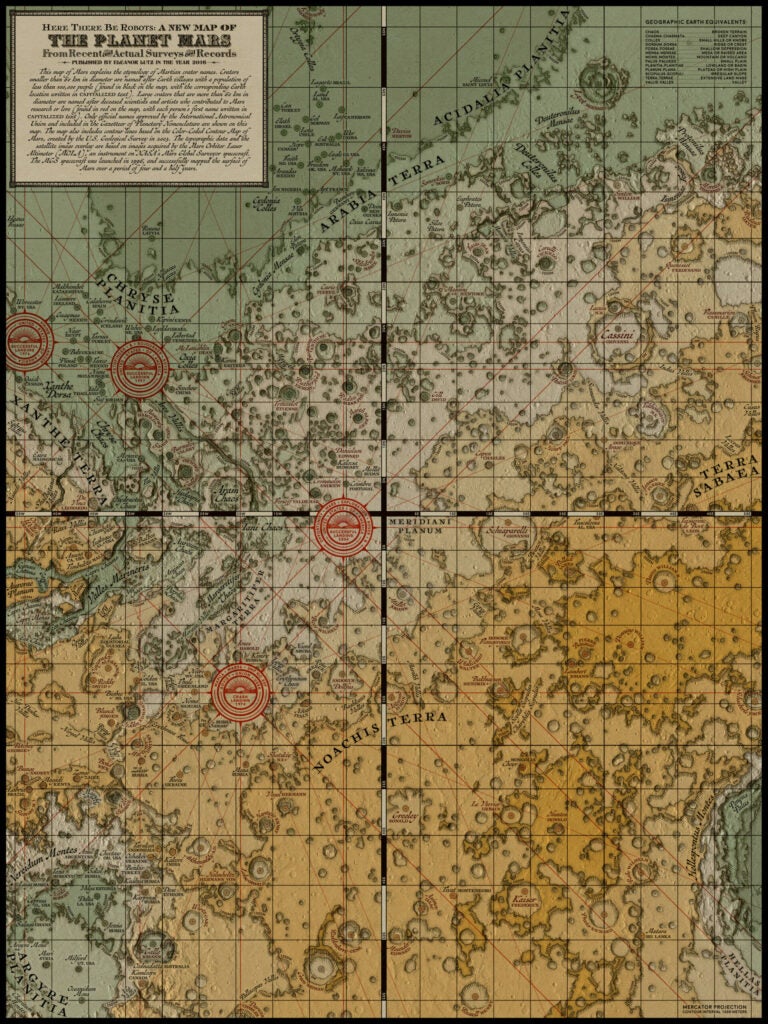 Here There Be Robots

Eleanor Lutz isn’t an astronomer—she’s pursuing a PhD in biology at the University of Washington—but she loves sifting through the data that NASA makes public. That’s how she got the idea to map Mars—with a Victorian twist. “Unlike other planetary maps, this map uses a Victorian style inspired by medieval cartographers,” Lutz says. “Victorian-style maps are from a time when most of the world remained a mystery, and travelers only knew about nearby lands. Now that people have mapped the entire globe, I think that Mars has taken over our collective imagination as the next mystery to explore. I wanted to make the geography of Mars more tangible to the general public.”

The hardest part? Fact-checking the name of each feature. “Since everything on the map is a proper noun, I had to go through and manually make sure every single landmark name and the name origin were spelled correctly.” 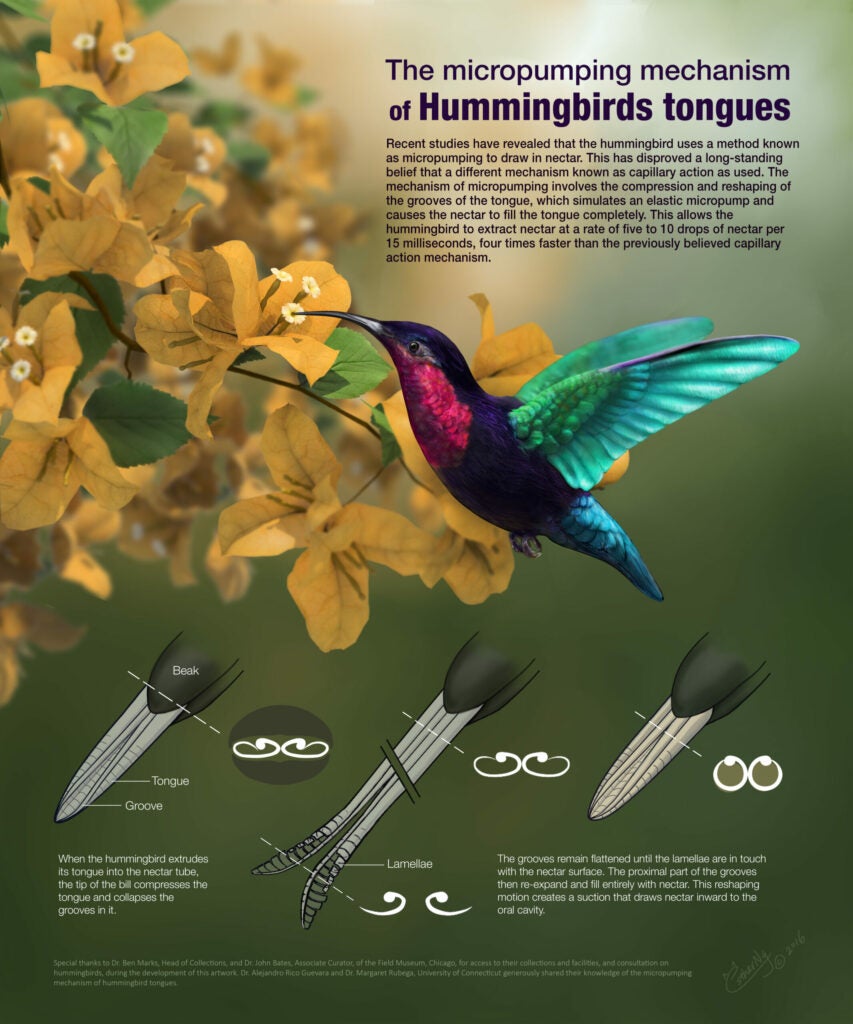 When Esther Ng set out to visualize a hummingbird’s tongue, she had no idea where her work would take her. At the time, no one was really sure what a hummingbird tongue looked like, though new discoveries about the little bird’s micro-pumping abilities were all the rage.

“It’s so tiny,” says Esther, a student at the University of Illinois focusing on scientific and medical illustrations. “Even with a video, it’s very hard to catch.” To fix this, she headed to the Field Museum in Chicago. “They let me borrow [the bird] to look under a microscope, to pull the tongue out and draw how it is,” she says. It was nothing like she imagined, but those surprises are what make her work so enjoyable.

“The situation is very tragic,” data visualizer Mauro Martino says of climate change. It’s so sad, in fact, that on many researchers “you can smell the sadness,” Martino adds. It makes sense: they’ve dedicated decades of their life and career to researching disasters and impending doom. But Martino, the creator and director of IBM’s Cognitive Visualization Lab, strives to turn their data into more upbeat, visual stories that people want to watch and share with their friends.

In “Network Earth,” Martino and his team created a film that shows the interconnections between all life on Earth. It was created to accompany a research paper on Earth’s resilience published in Nature. While the paper was theoretical, Martino says, the video aims to show that “math can be poetically expressed visually” and made to feel real and tangible to viewers around the world.

When astronomers Michael Brown and Konstantin Batygin published the best-ever evidence for the existence of a ninth planet—a massive world orbiting in the farthest reaches of our solar system—the hunt for the mysterious celestial body captured the public’s imagination. This video for Chicago’s Adler Planetarium uses that fascinating research to show visitors how such scientific explorations unfold.

“Our goal with this show was not to teach people about Planet Nine, and it certainly wasn’t to convince them that Planet Nine exists,” says Patrick McPike, a visual engineer at the planetarium. “The show is really about the excitement and process of scientific discovery. We hope that the show gets people more involved in science, whether that is by following science news more closely or by studying it themselves.”