Scientists can now see how diet impacts the gut and its microbes—and you can, too 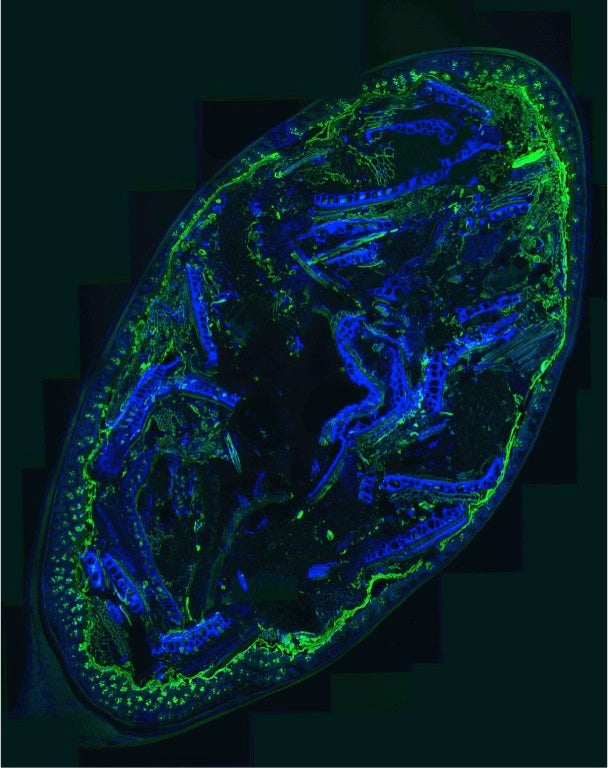 The microbes in your gut depend on you to feed them well. A steady diet of complex fibers keeps them happy—and by extension, may keep you healthier. The microbiota have been linked to weight, gut health, allergies and even mood. Studies have shown that when the host (you) fails to supply the hungry hordes of beneficial microbes with what they want, the populations can change, and can even start to threaten the gut’s thin lining. But we have been unable to see exactly whether—and how—these shifts were happening.

Now a team at Stanford University has created an elegant method of peering inside the gut—at cell-level resolution—to see what is going on. The research is in the October issue of Cell Host & Microbe.

Most of our understanding about gut microbes—and any impact diet has on them—has come from poop. Researchers can run a quick genetic scan on a smudge of a fecal sample, assessing which microbes are there, and in what abundances. But from this mixed-up pile, there is no way to know where in the gut the microbes are living—or how they are interacting with one another or with you. “Mapping the spatial organization of this microbial community is a fundamental aspect of understanding its biology,” says Justin Sonnenburg, a microbiologist at Stanford and coauthor of the new paper. “Without this information, we will struggle to make sense of how these microbes are contributing to our health or why interactions go awry and cause disease.”

“This is a huge advance,” says Eric Martens, an assistant professor of microbiology at the University of Michigan Medical School, who also studies the impact of fiber on gut microbes and the gut’s mucus layer and was not involved in the new research. “Since we are just beginning to understand the mechanisms and functions of the hundreds of species of bacteria that inhabit the gut, understanding how these organisms pack together, organize, and reproduce in such a dense and tightly confined space provides enormous insight,” he says.

Sonnenburg and his colleagues fed mice (colonized with human gut microbes) standard and fiber-deficient diets. They then carefully preserved thin slices of the mouse intestines and added special dyes to mark different microbes, undigested food, the essential mucus layer and the gut wall. With so many minute sample slices to analyze, they also developed software to help compute the spatial relationships.

In being able to actually see what was happening on these different diets, the researchers found that when the fiber was reduced, the mucus layer shrank—likely due to starved microbes eating it—from approximately 51 micrometers to just 31, allowing the microbes closer to the sensitive wall of the intestine. And as Sonnenburg notes, “we know that part of maintaining harmony between our resident microbes and our intestinal tissue is separation of the two”—namely by the mucus layer.

As this mucus layer shrank, mice missing the fiber in their diet also had more markers of inflammation. This can be triggered by the immune system attempting to keep bugs where they belong—in the gut. “Over long periods of time, low levels of inflammation can lead to many different types of problems, including colitis or even cancer,” Sonnenburg says. (But, he cautions, the experiments have only been in mice—and over a short time period—so how the findings translate to us and our long-term health remain to be seen.)

In addition to the shrinking mucus layer, the researchers were also able to see that changing the diet altered the way bacteria were organized in the gut. On a standard diet, two categories of bacteria were usually found in clumps of similar cells. But without fiber, these groupings vanished, and the microbes were more evenly distributed.

Ronan O’Connell, of University College Dublin’s Conway Institute of Biomolecular and Biomedical Research, has been using laser microscopy to parse the structure of the gut microbiota in healthy people as well as those with diseases of the intestinal tract. He notes that the new imaging technique “beautifully illustrates the complexity of the host-microbiome interface,” adding that it might some day be able to be used to study the differences in healthy and diseased guts in humans. Sonnenburg and his group are, in fact, already looking to expand the work to humans.

In the meantime, the new software used for this work (called BacSpace) is available to other groups, and, Sonneburg notes, he hopes sharing it will “propel this field forward rapidly.” Martens, for one, is enthusiastic about the potential for this visual approach. “One can imagine turning up the resolution to the species level, instead of just phyla.”

Katherine Harmon Courage is a freelance journalist; her next book Cultured (2016) is about the gut microbiota and diet. @KHCourage 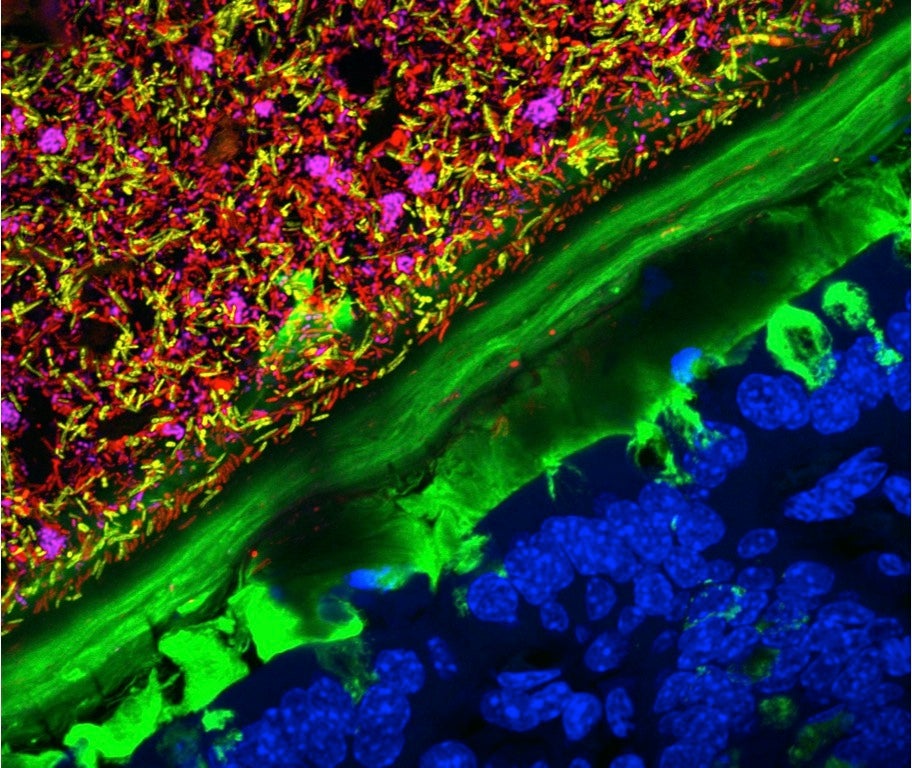 Your large intestine may not usually be a pretty place, but for scientists wielding a new technique to map out every last bacterium and undigested food particle, it can become a marvel. The results, described in the October issue of Cell Host & Microbe paint a stunning visual picture of a delicate dance between necessary microbes and the sensitive gut wall—kept in balance by a crucial layer of mucus. This image shows a detail taken from a mouse’s gut that has been colonized with human gut microbes; the mucus layer is dyed green, the gut wall cells are tinted blue, and two phyla of bacteria common in a human gut are also marked: Firmicutes in yellow and Bacteroidetes in fuchsia. Such never-before-seen detail will help researchers better understand how diet can impact gut microbes and our health. 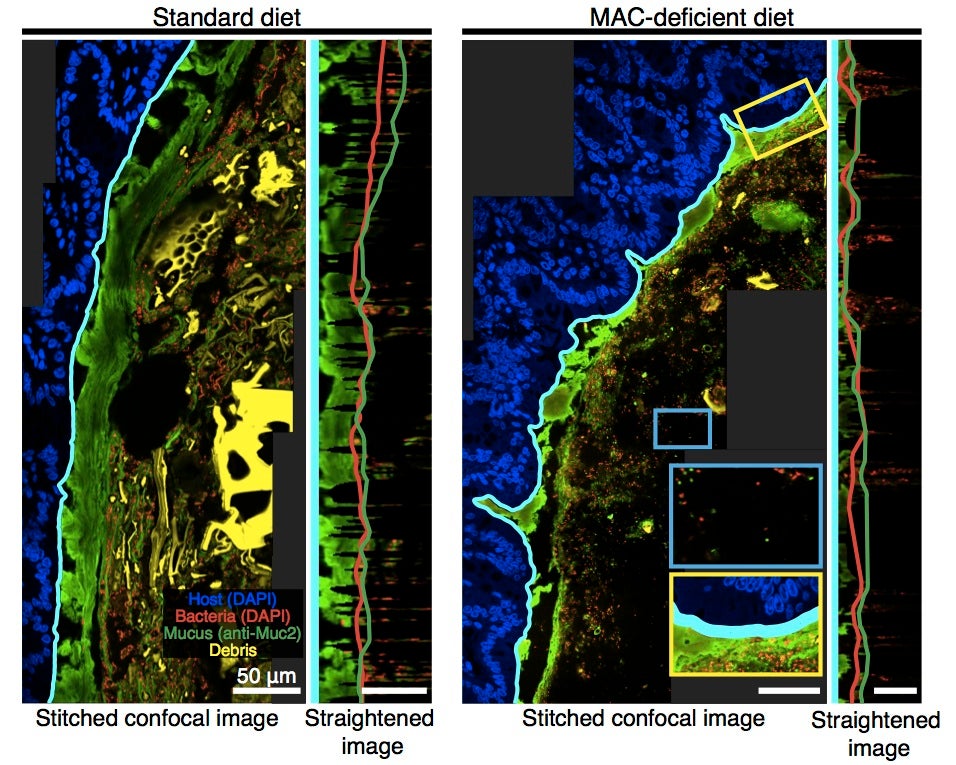 We depend on the mucus layer (pictured in green) to protect our gut wall. Even beneficial microbes in our gut can cause the immune system to activate if they get too close. A normal, healthy mucus layer is pictured on the left, showing the microbes (red) and food particles (yellow) far away from the host tissue (blue) when mice were on a standard diet. But when mice didn’t eat any fiber (a favorite food of gut microbes, also known as “microbiota-accessible carbohydrates” or “MACs”), the mucus wall shrank, allowing microbes uncomfortably close to the gut tissue. Why the shrinkage? When microbes don’t have dietary fibers to munch on, they eat the mucus instead.

Researchers found that mice colonized with human gut microbes and fed a normal, healthy diet had clusters of different types of bacteria (Bacteroidetes in red and Firmicutes in green). When mice lacked fiber in their diet, however, this organization disappeared, and members of these two microbe phyla were scattered randomly within the large intestine. You can also see that the space (black) between the microbes and the host tissue (blue) is thinner in the no-fiber diet. 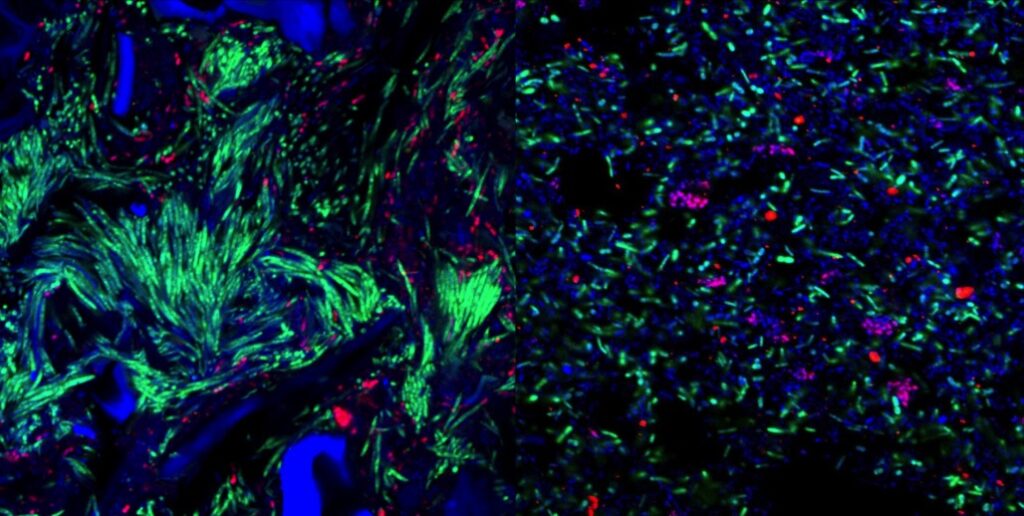 A closer look comparing the healthy diet (left) and the fiber-deficient diet (right) shows how different the distributions of the microbe types are. Bacteria in the Bacteroidetes phylum are in red, and those in the Firmicutes phylum are in green. The standard diet on the left also appears to contain more Firmicutes overall than the fiber-free diet on the right, which could have implications for what happens in the gut—and by extension, the host. 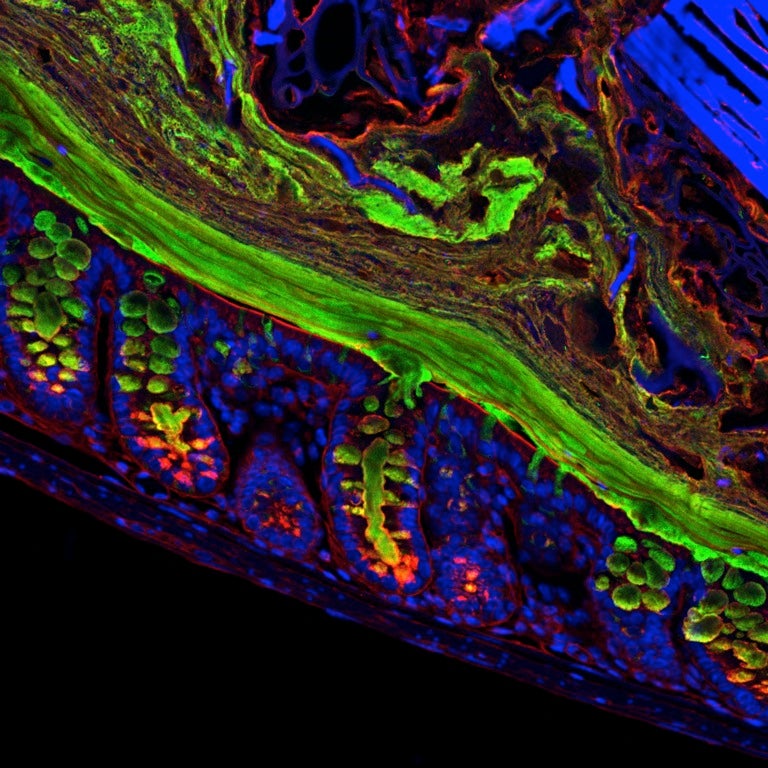 The crucial mucus layer that protects our gut is constantly being renewed. This image of a standard mouse gut shows a close-up of mucus (green) being formed by goblet cells (in pockets surrounded by blue host tissue) and then released into the mucus barrier. “The mucus forms sheets that build on top of each other, forming a boundary,” explains Kristen Earle, a graduate researcher in microbiology and immunology at Stanford University and co-author of the new study. “On top of this layer is a looser layer, that forms a habitat for bacteria.” 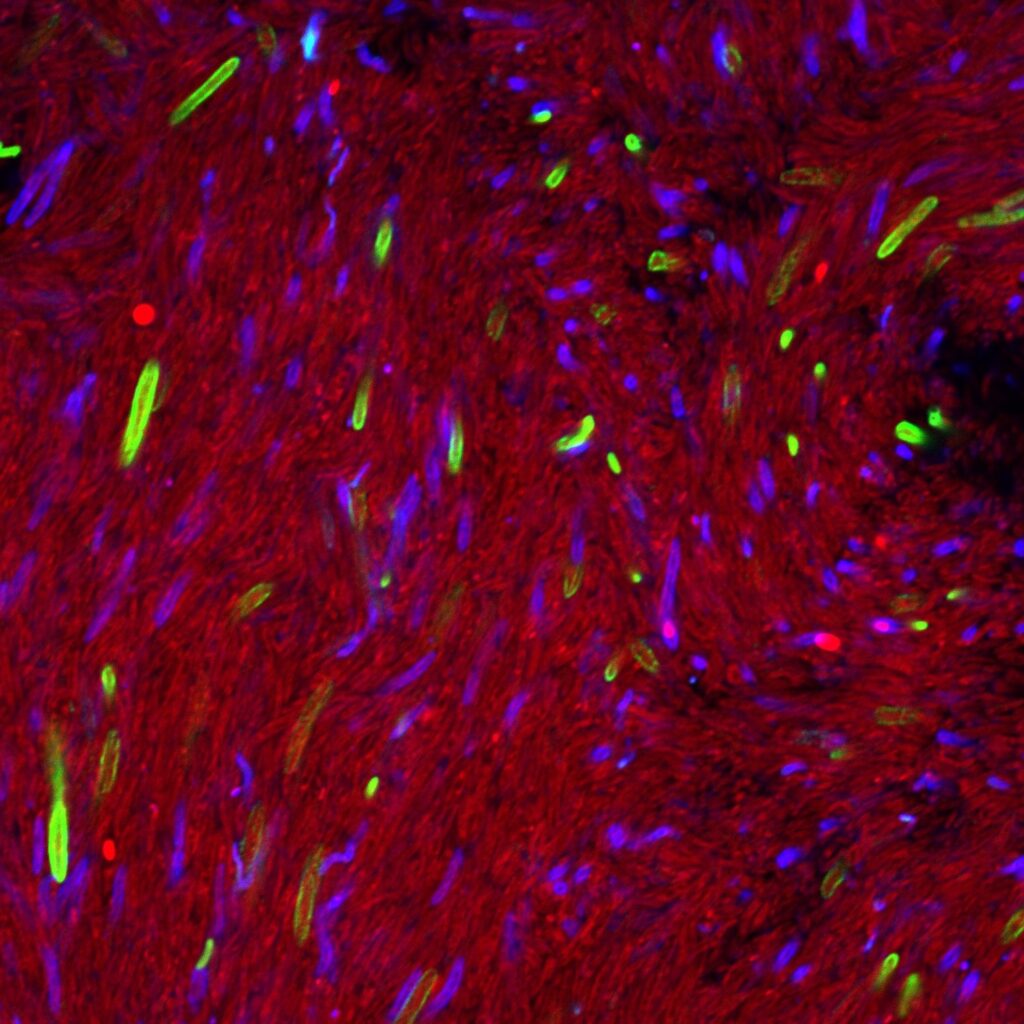 The highest concentrations of bacteria are found in the large intestine, where they break down fibers and other compounds our body couldn’t process on its own. This image shows a mat of bacteria in a normal mouse fed on a healthy diet. Although fewer and farther-between, bacteria in the small intestine seem to play a role in shaping the landscape there. The small intestine is lined with protrusions called villi, which help increase the body’s ability to absorb nutrients from food passing through. In mice fed a standard diet, there was a small amount of an antimicrobial compound (called REG3B, noted by coloring antibodies to this compound in red) at the base of the villi. But this microbe-deferring compound was prevalent through the villi when mice ate a fiber-free diet. Researchers are still investigating what this might mean for health.
microbiome
Photography