Making inefficient enemas a thing of the past 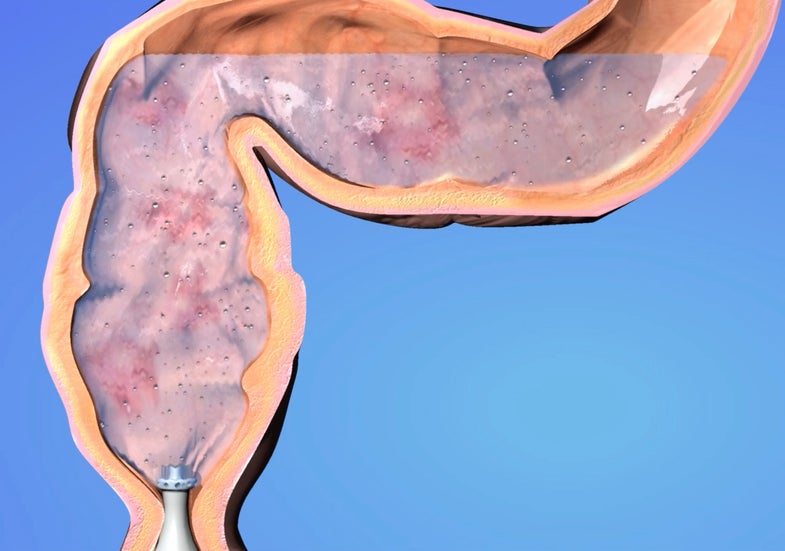 For sufferers of gastrointestinal disorders such as Crohn’s disease, ulcerative colitis, and other inflammatory bowel diseases, getting drugs to where they are most needed is a laborious and often ineffective process. Intestinal tissue is often slow to absorb the molecules in the drugs, so they are often delivered by enemas that need to be left in for hours. That process can be both inconvenient and difficult for patients with these sorts of disorders, many of whom need to use the bathroom frequently. Now researchers from MIT have discovered that ultrasound can help deliver the same drugs to the gastrointestinal tract more efficiently, according to a study published yesterday in Science Translational Medicine.

Though humans have known about ultrasound for centuries, researchers have discovered more medical uses for it in the past few years, especially in delivering drugs and in healing wounds. That’s because ultrasound creates tiny bubbles in liquid. When they pop, they can push molecules in or out of tissues. If it’s done right, it won’t damage tissues in the process.

In this most recent study, the researchers tested ultrasound on human tissues in the lab and on live pigs and mice for two weeks. They wanted to see if the cells would absorb a few molecules of different sizes used to treat GI conditions—inulin, hydrocortisone, and mesalamine—any faster compared to if they were treated with ultrasound. The researchers found that the human tissues took up the drugs two to 10 times as fast as they would without the ultrasound, depending on where in the GI tract the cells came from. They saw similar results in the animal models, and the pigs and mice didn’t display any discomfort or side effects.

With further study and a few improvements to the ultrasound device, the researchers hope that this drug administration technique–which would theoretically be an enema with an ultrasound attached–could be used in both clinical and research settings. And though patients with gastrointestinal disorders would be the most obvious to benefit, this method could also help deliver drugs to patients with colon cancer or gastrointestinal infections, according to the MIT press release.