It could work the same way in humans 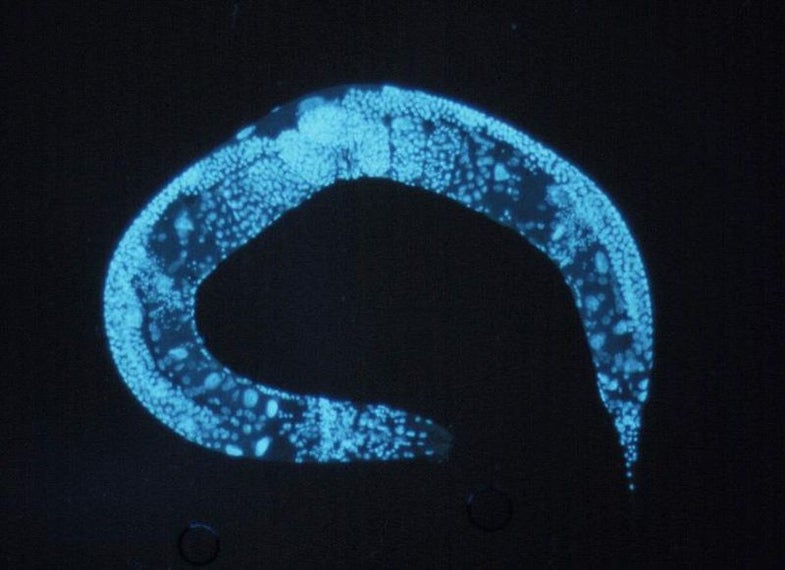 From the second we’re born, our cells are given their marching orders for how to grow, mature, and maintain our bodies. But at a certain point, the repairs become faulty, and we age and eventually die. Now a team of Korean researchers has found a way to modify a particular type of enzyme in roundworms to double their lifespan—and they suspect the same mechanisms might work in humans.

Caenorhabditis elegans, the roundworm in question, may not look much like humans since they measure just one millimeter in length, but a number of their biological processes are similar to ours. In the study, published this week in PNAS, the researchers turned their attention to a family of enzymes called RNA helicase. These enzymes are known to regulate RNA, which is found in every living cell to carry instructions from DNA to control protein synthesis and maintain cells. Though RNA helicase is well studied, researchers don’t know much about the role it plays in the aging process.

When the researchers suppressed one particular helicase, HEL-1, as well as a gene called daf-2, the mutated roundworms were not only more immune to environmental stresses of heat, cold and pathogenic bacteria, but also their lifespans were double that of wild roundworms.

They suspect HEL-1 plays a key role in how cells convert DNA to RNA, and even conscript other enzymes to do it too. “In contrast to the expectation that RNA helicases have general housekeeping roles in RNA metabolism, our findings reveal that the RNA helicase HEL-1 has specific roles in a specific longevity pathway,” the researchers write.

HEL-1 is found in many different types of organisms, including mammals—even humans. And while it’s not clear that helicases play the same role in human longevity, some evidence suggest that it could be. That could be particularly useful in treating neurological diseases that become more common with age like Alzheimer’s. But ultimately researchers hope that this work could lead to new ways to increase human longevity.