Leave these self-improvement tricks to the professionals

Scientists and amateurs alike have been testing the effects of sending electrical currents across the scalp. Illustration by Chris Philpot
SHARE

To improve themselves, a growing number of people are going beyond meditation or exercise. These brave pioneers are trying to hack their bodies with bacteria, special diets, and even electrical zaps. 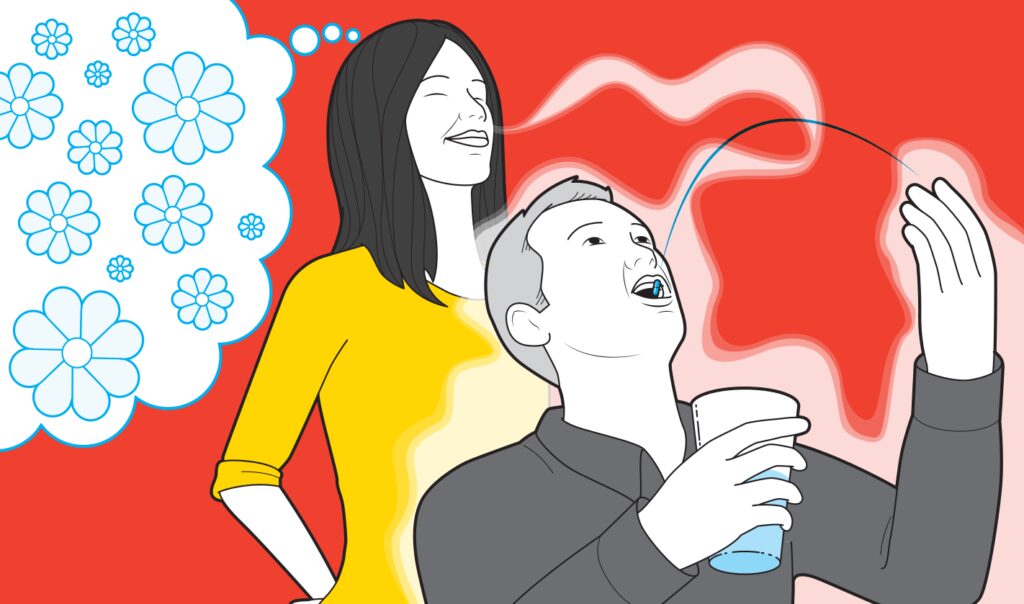 Scientists are developing probiotics that are modified to produce more pleasant smells than the current bacteria living in your gut.

Humans don’t stink—it’s the bacteria eating our sweat and stomach contents that cause body odor. Avoiding meat and staying hydrated can tamp down some malodorous strains. But a more drastic measure is in the works. Personalized Probiotics is working with Cambrian Genomics to develop genetically modified bacteria that colonize the gut. Following the orders of specialized genes, the bacteria would produce pleasant-smelling compounds to mask the reek of their brethren. “All life is code,” says Austen Heinz, CEO of Cambrian Genomics. “Everything is editable.”

A group of citizen scientists experimented with a diet to improve their eyes.

Jeffrey Tibbetts and a group of citizen scientists designed a diet to augment human sight. The all-liquid regimen cuts out vitamin A1, supposedly forcing the eyes’ light-sensitive proteins to incorporate vitamin A2 and shifting the visible spectrum. After several weeks, dieters claimed to see near-infrared light, and Tibbetts described perceiving enhanced colors that produced “the most fantastic sunsets in the world.” Actual scientists offer a darker view: The diet is more likely to cause deadly vitamin A deficiency than to work.

Scientists and amateurs alike have been testing the effects of sending electrical currents across the scalp.

Studies suggest a little electricity across the scalp can relieve pain, increase focus, even tame bipolar disorder. Scientists are still testing the potential of transcranial direct current stimulation (tDCS) in trials where trained professionals use expensive medical grade devices. Meanwhile, intrepid amateurs are trying to develop their own tDCS tools from nine-volt batteries. These rigs are nothing like those in hospitals and labs, cautions biomedical engineer Marom Bikson: At least one DIYer claimed he went temporarily blind.

WARNING: Extreme body mods can have serious side effects. Until we engineer new bodies, take care of the one you’ve got.

This article was originally published in the February 2015 issue of Popular Science, under the title “Three Body Hacks You Shouldn’t Try At Home”.