Nanomia bijuga is built like bubble wrap, and it's a master of multi-jet propulsion. 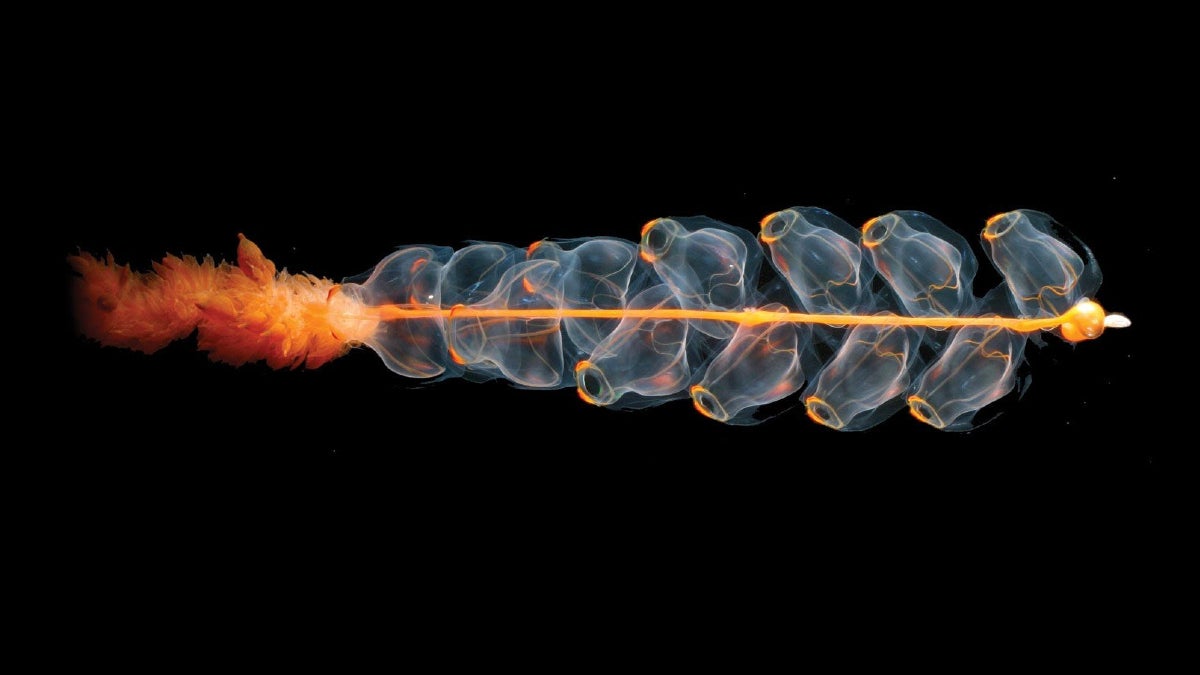 Sea creatures have developed many creative ways of getting around their watery worlds. Some have tails for swimming, some have flippers for gliding, and others propel themselves using jets. That last transportation mode is commonly associated with squids, octopuses, and jellyfish. For years, researchers have been interested in trying to transfer this type of movement to soft robots, although it’s been challenging. (Here are a few more examples.)

A team led by researchers from the University of Oregon have sought to get a closer understanding of how these gelatinous organisms are steering themselves about their underwater domains, in order to brainstorm better ways of designing underwater vehicles of the future. Their findings were published this week in the journal PNAS. The creature they focused on was Nanomia bijuga, a close relative of jellyfish, which looks largely like two rows of bubble wrap with some ribbons attached on one end of it.

This bubble wrap body is known as the nectosome, and each individual bubble is called a nectophore. All of the nectophores can produce jets of water independently by expanding and contracting to direct currents of seawater through a flexible opening. Technically speaking, each nectophore is an organism in and of itself, and they’re bundled together into a colony. The Monterey Bay Aquarium Research Institute describes these animals as “living commuter trains.”

The bubble units can coordinate to swim together as one, produce jets in sequence, or do their own thing if they want. Importantly, a few patterns of firing the jets produces the major movements. Firing pairs of nectophores in sequence from the tip to the ribbon tail enables Nanomia to swim forward or in reverse. Firing all the nectophores on one side, or firing some individual nectophores, turns and rotates its body. Using these commands for the multiple jets, Namonia can migrate hundreds of yards twice a day down to depths of 2,300 feet (which includes the twilight zone).

For Namonia, the number of nectophores can vary from animal to animal. So, to take this examination further, the team wanted to see whether this variation impacted swimming speed or efficiency. Both efficiency and speed appear to increase with more nectophores, but seem to hit a plateau at around 12.

This system of propulsion lets the Namonia go about the ocean at similar rates to many fish (judged by speed in context of body length), but without the high metabolic cost of operating a neuromuscular system.

[Related: This tiny AI-powered robot is learning to explore the ocean on its own]

So, how could this sea creature help inform the design of vehicles that travel beneath the waves? Caltech’s John Dabiri, one of the authors on the paper, has long been a proponent of taking inspiration from the fluid dynamics of critters like jellyfish to fashion aquatic vessels. And while the researchers in this paper do not suggest a specific design for a propulsion system for underwater vehicles, they do note that the behavior of these animals may offer helpful guidelines for engines that operate through multiple jets. “Analogously to [Namonia] bijuga, a single underwater vehicle with multiple propulsors could use different modes to adapt to context,” the researchers wrote in the paper.

Simple changes in the timing of how the jets fire, or which jets fire together, can have a big impact on the energy efficiency and speed of a vehicle. For example, if engineers wanted to make a system that doesn’t need a lot of power, then it might be helpful to have jets that could be controlled independently. If the vehicle needs to be fast, then there needs to be a function that can operate all engines from one side at the same time.

Learn more about Nanomia and watch it freestyle below: