This Is Your Brain On The Hallucinogenic Drug Ayahuasca 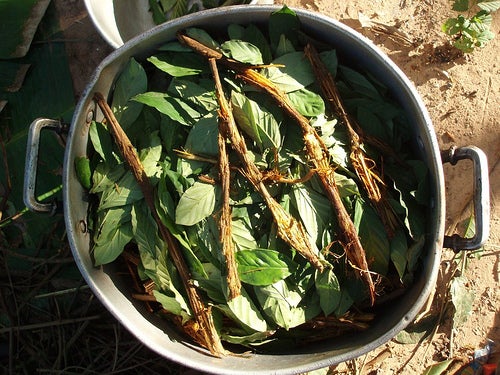 ASAP Science, a YouTube Channel created by Mitchell Moffit and Gregory Brown, just posted this interesting video looking into how the drug ayahuasca actually affects parts of your brain. The video shows how a chemical in the drink, N,N-Dimethyltryptamine (DMT), interacts with the body, causing strong hallucinations in people who take the drug.

Ayahuasca is a drink brewed from stems and leaves of certain plants that grow in the Amazon river basin. Though illegal, it’s become popular for its intense and often highly emotional trips. Recently, it’s had a prominent role in Hulu’s series The Path, where a fictional cult uses the drink to progress spiritually.

But though it has entered popular culture, the drug’s use is often unmonitored and unregulated leaving potential users vulnerable to people that seek to profit off the drug. Vomiting is often a side effect, and interactions with other drugs or some preexisting heart conditions can be deadly.

Ayahuasca is illegal in the United States and most other countries, classed as a Schedule 1 drug, in the same class as marijuana, meth, heroin, and LSD. Like marijuana, there is ongoing research into the potential medical benefits of ayahuasca, to treat conditions like depression.