Arizonians are the first Apple users to get digital wallet IDs

It’s the first state to utilize the new Apple Wallet feature – but its usage is limited. 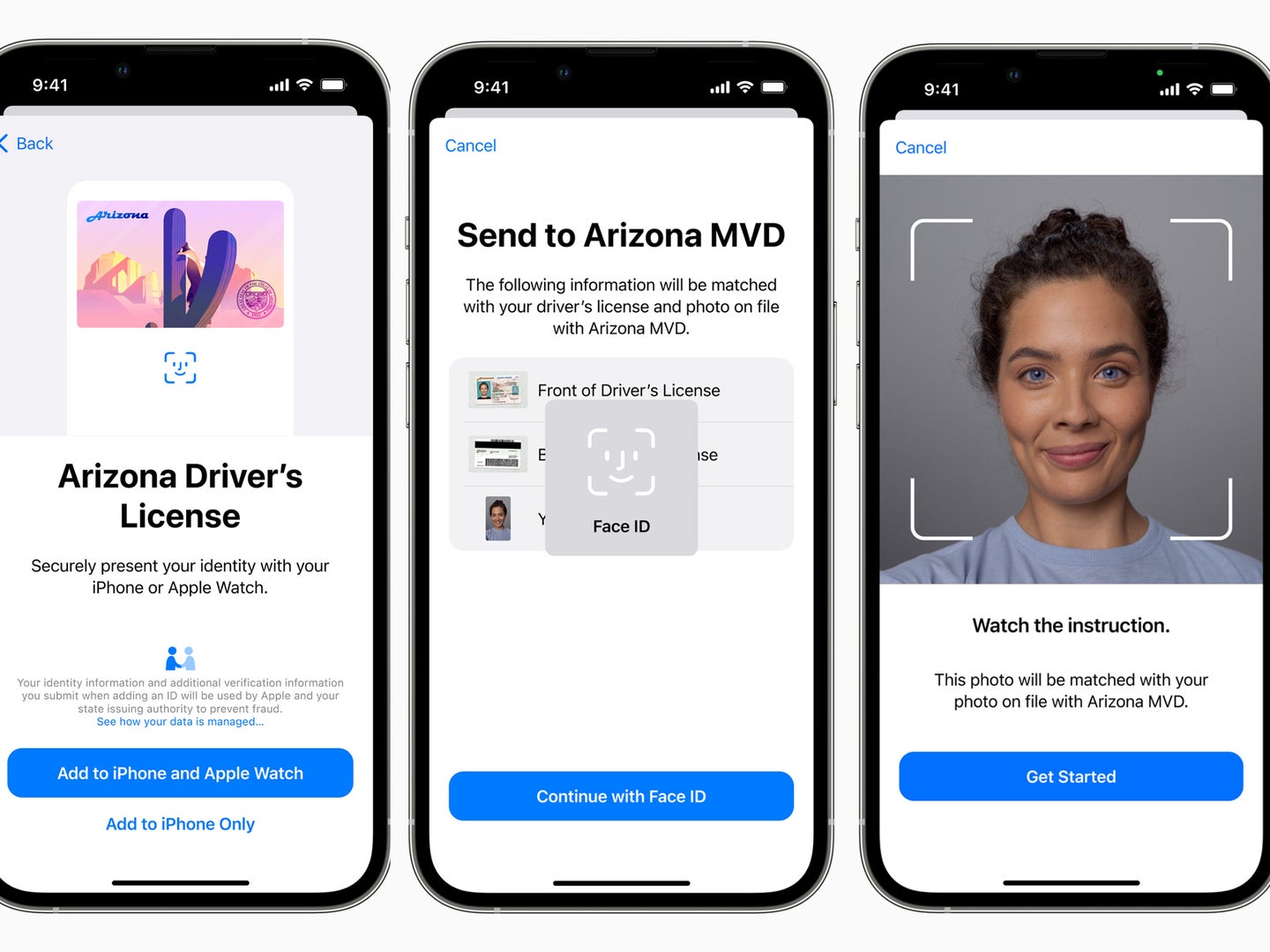 Apple Wallet IDs are rolling out in Arizona on a limited basis. Apple
SHARE

Arizona residents with Apple devices can now upload their driver’s licenses and state identification cards into their devices’ digital Wallets. Apple first announced the feature last fall, noting that seven states were planning to offer it, but Arizona is the first to implement it. While the goal is ultimately to help create a more seamless and touchless security experience for travelers at airports across the US, for now, this method of ID will only be accepted at “select TSA security checkpoints” in the Phoenix Sky Harbor International Airport.

“We’re thrilled to bring the first driver’s license and state ID in Wallet to Arizona today, and provide Arizonans with an easy, secure, and private way to present their ID when traveling, through just a tap of their iPhone or Apple Watch,” Jennifer Bailey, Apple’s vice president of Apple Pay and Apple Wallet, said in a press release Wednesday.

To upload an ID, Arizona residents first need at least an iPhone 8 running iOS 15.4 or an Apple Watch Series 4 running watchOS 8.4 (later models of both devices will also work). They can then go into their Wallet, hit the “plus” button located at the top of the screen, and select the “Driver’s License or State ID” option. The setup process includes scanning the front and back of an existing hard copy of a license or ID card, which will be sent over to the state’s department of motor vehicles for verification. Users will also be required to upload a selfie and “prompted to complete a series of facial and head movements.”

[Related: These 8 states will let you flash an iPhone driver’s license]

Once it has been approved, the digital ID or license can be displayed by tapping them at identity readers at the select airport security checkpoints. Users will receive a prompt that lets them know what information the Transportation Security Administration (TSA) is requesting, and they can then consent to provide it using Face or Touch ID. That information will be encrypted and transmitted digitally, without needing to hand the device over to a TSA agent.

According to Apple’s press release, the TSA will also take an in-person photo of the traveler for “verification purposes.” The Verge reached out to the TSA for additional information on how those photos will be used and stored, but received no response. The agency did offer some additional details in its own press release, including that passengers must still bring their physical license or ID card with them to the airport for backup, as it “may be required by the TSA officer to complete ID verification.”

Apple says an additional 11 states, as well as Puerto Rico, are planning to roll out this feature for their residents “soon,” though the company did not offer any specific timelines. This is just one of multiple new Wallet features Apple has introduced in recent months, including digital hotel keys at participating Hyatt hotels and Covid-19 documentation.

Privacy experts have expressed concerns about some of these offerings, including the digital IDs, cautioning that uploading this type of sensitive information could open users up to privacy abuses or present security risks. There is also the potential issue of outages – already this week, Apple has experienced two significant outages impacting much of its services and online presence, The Verge reported Tuesday.