The next 30 years of observations will revolutionize astronomy. 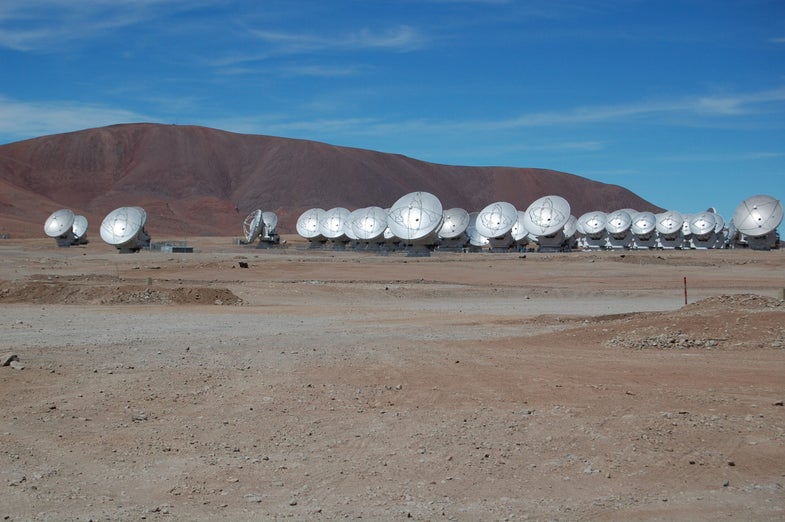 NEAR SAN PEDRO DE ATACAMA, CHILE — A massive new telescope that will unveil the faintest, most distant objects in our universe is officially inaugurated today, with great fanfare and anticipation from the world’s astronomical community. Scientists gathered in the desolate Chilean Andes this week say the new Atacama Large Millimeter-submillimeter Array could revolutionize cosmology. It it is the largest, most complex and most ambitious telescope project in history.

ALMA, whose acronym means “soul” in Spanish, will uncover some of the most mysterious and yet most common phenomena in the cosmos. From its perch on the 16,400-foot Chajnantor Plateau, it will see the birth pangs of stars, the collision of cosmic crumbs that turn into planets, and possibly even the formation of moons around faraway worlds.

“This is much more than an astronomers’ observatory. ALMA will allow us to get deeper into this universe, but also to get deeper into our own nature, and our own lives,” said the president of Chile, Sebastián Piñera. “The native Chilean people that lived here since 10,000 years ago knew this from the beginning. In their native language, Chajnantor means ‘point of observation.’ … We know that Chile is a very small country, but with your help, in astronomy, we want to become a real giant.”

Pinera led a delegation of luminaries who drove on winding unpaved roads, past grazing llamas and looming cactus, before traipsing through the soft gray dirt at ALMA’s Operations Support Facility.

A week prior to the ceremony, a shaman and other indigenous Andeans traveled to the array and blessed the telescope’s antennas. Even the astronauts orbiting Earth on the International Space Station joined in the celebration with a surprise message Wednesday. Along with future observatories, including the James Webb Space Telescope, ALMA “will enable the exploration of the universe with unprecedented power,” said Chris Hadfield, who recently turned over the commander’s seat. “We congratulate the scientific communities of North America, and Europe and east Asia. …”Enjoy your new discoveries.”

The ceremonies Wednesday capped 30 years of planning and a decade of construction. The U.S. spent $500 million on the ALMA project, making it the largest investment ever by the National Science Foundation in any facility in the world, according to Subra Suresh, the outgoing director of NSF. Along with its potential for groundbreaking new science, the technology behind ALMA will translate to countless new innovations we might not even imagine now, he said–just as the Apollo moon program set off new products that had nothing to do with the moon.

The technology that makes ALMA possible only came into existence in the past few years, astronomers said. Throughout its expected 30-year lifetime, it can also be upgraded with even more powerful receivers that could probe even deeper.

“There’s no way this could have happened any sooner, because the technology is state-of-the-art,” said Alison Peck, former head of ALMA commissioning and now an associate scientist at the National Radio Astronomy Observatory, an ALMA partner.

Half of all light in the universe is in millimeter-wavelength light between the far infrared and radio waves. ALMA can detect this light, which is emitted by cool objects and distant objects. It’s possible thanks to the telescope’s location at 16,400 feet in the driest desert on Earth, and because of the incredible precision of its 66 antennas.

All telescopes are limited in their angular resolution by the ratio of their aperture to the wavelength they observe, explained Michael Thornburn, head of the ALMA department of engineering. ALMA is an aperture synthesis telescope.

“We cannot make a single aperture 15 kilometers across, so we do it in pieces,” he said. “The signals from individual dishes are combined to build up the image from a single large aperture.”

Radio signals from distant cosmic sources arrive at each dish at ever-so-slightly different times, and these are combined with the signals from every other antenna. This technique, interferometry, allows ALMA to operate like a single huge dish with an adaptable radius.

In a carefully choreographed ballet, each dish moves in unison with the others to change the telescope’s observing area. Along with moving in place, giant transporter trucks, specially designed for the dishes, can pick them up and cart them across the Chajnantor Plateau to one of 192 concrete pads. At their greatest distance apart–16 kilometers–ALMA’s angular resolution will be equivalent to the Hubble Space Telescope, Peck said.

ALMA is observing sources that are 10 times weaker than those observed with other arrays, explained Pierre Cox, ALMA’s incoming director. This is key to ALMA’s capability for observing phenomena like star formation, he said.

“Future observations should allow us to detect dark matter substructure and shed light on its nature,” he added.

There’s much more to learn about how ALMA works, and why astronomers are so excited about it–stay tuned for more dispatches from the Atacama. 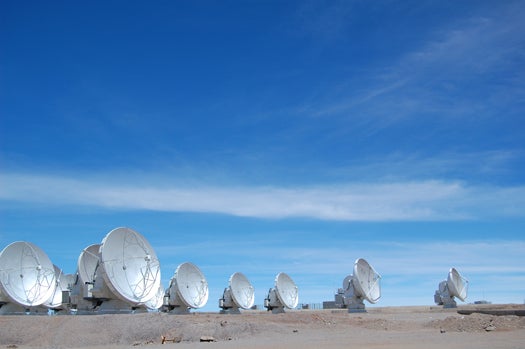 The ALMA telescope can make observations 24 hours a day, as long as there are clear skies in the Atacama. Even thin wispy clouds can block some of the incredibly faint signals ALMA struggles to hear from the distant cosmos. 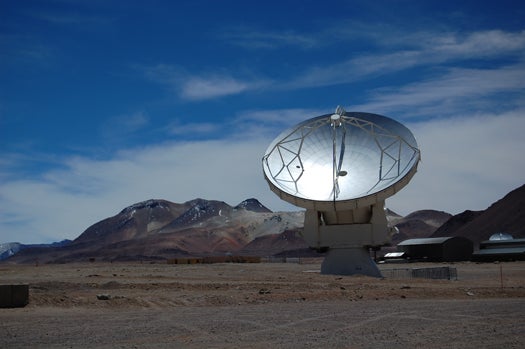 One of 50 12-meter ALMA antennas scans the daytime skies from the Chajnantor Plateau, at 16,400 feet in the Andes mountains. 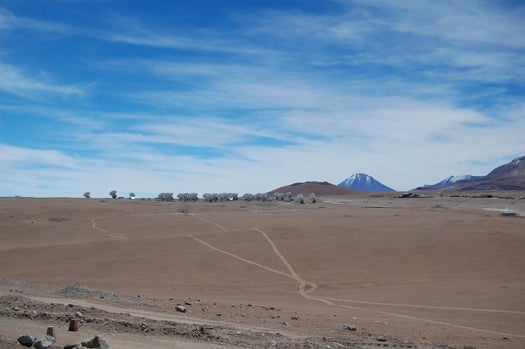 Dishes In The Distance

The landscape of the Chajnantor Plateau looks otherworldly, covered with soft red dust and bookended by mountains and volcanoes. The Licancabur volcano, an iconic symbol of the Atacama, is in the background. 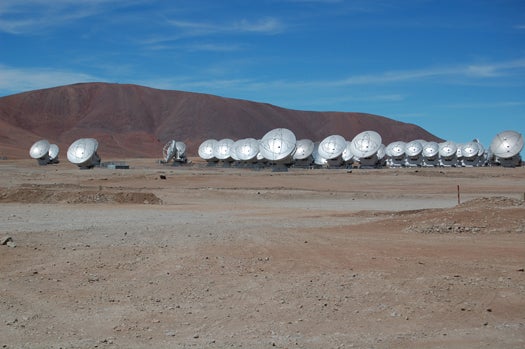 ALMA is the grandest ground-based observatory ever built. 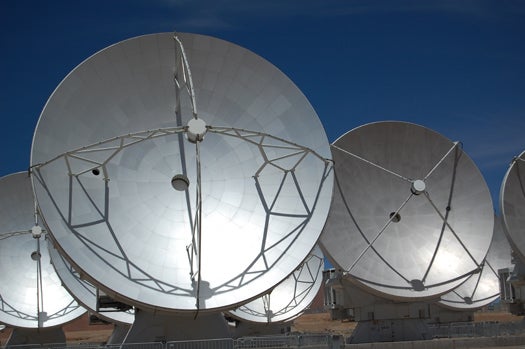 The receivers inside ALMA’s 12-meter antennae are cooled to 4 degrees Kelvin, which is -269 Fahrenheit. This is done to avoid radio interference from the sensitive electronics. 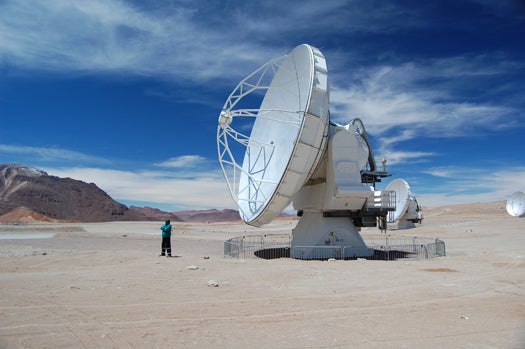 A paramedic stands next to one of ALMA’s 12-meter radio antennas. The Array Operations Site is at such a high elevation that many people experience altitude sickness; paramedics are always on site to provide extra oxygen. 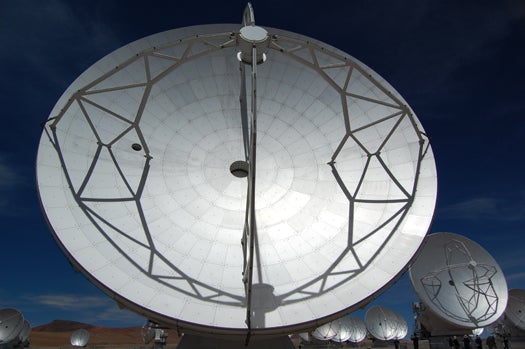 ALMA’s 50 “big” antennas–25 made in the U.S., 25 made in Europe–move in unison to change viewing positions in the sky. 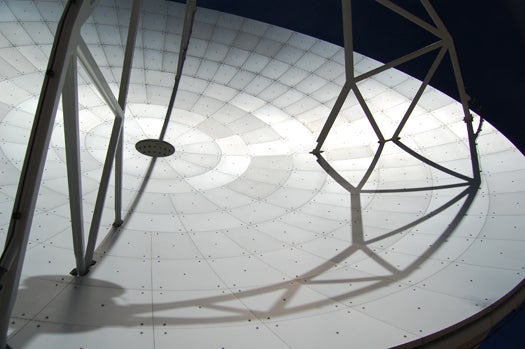 ALMA’s radio dishes are designed to withstand extreme temperatures, winds and even earthquakes in Chile’s inhospitable Atacama Desert. The dishes maintain a perfect parabolic shape down to 25 microns of error across their entire surface — about the width of a human hair. 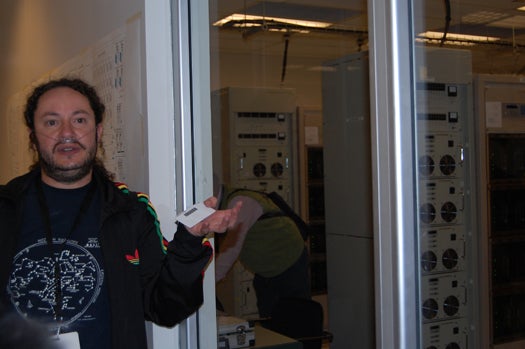 Alejandro Saez, correlator team lead for the Atacama Large Millimeter-submillimeter Array, describes the new telescope’s specially built supercomputer. The telescope dishes and computer are located at 16,400 feet in the Chilean Andes, so Saez and other workers wear portable oxygen tanks. 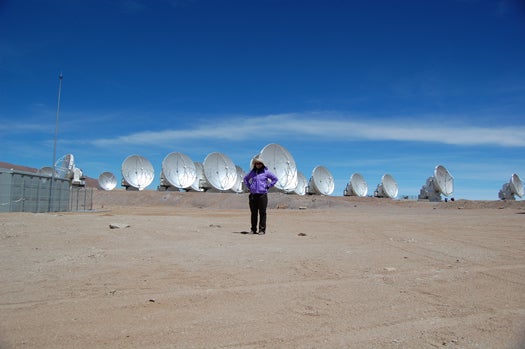 Your telescope correspondent at the Chajnantor Plateau. 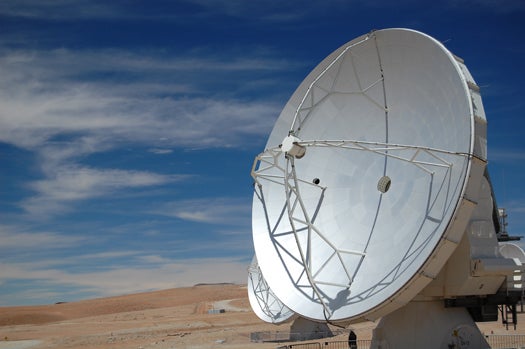