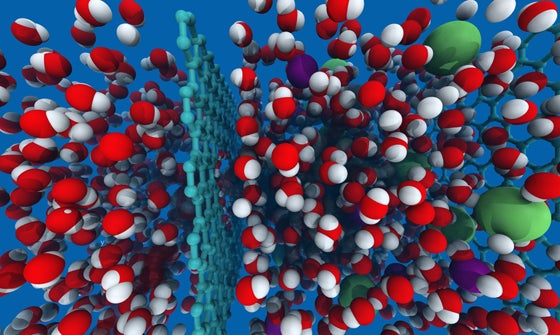 When water molecules (red and white) and sodium and chlorine ions (green and purple) encounter a sheet of graphene (pale blue, center) perforated by holes of the right size, the water passes through, but the sodium and chlorine of the salt are blocked. David Cohen-Tanugi/MIT
SHARE

It’s surprisingly hard to find safe drinking water on Earth–this on a planet covered in water. A new project by Lockheed Martin hopes to change that, and do it cheaply. Using a graphene filter, Lockheed hopes to transform salt water into drinking water by the end of the year.

The timing couldn’t be better. Ending water scarcity is one of the United Nations’s millenium development goals. But it is a daunting task: while there’s enough freshwater for everyone on earth, it isn’t very evenly distributed, and untangling that distribution is a Herculean feat. For the 44 percent of the world’s population that lives within a hundred miles of coasts, technology that can convert salt water into fresh water is an important alternative.

Desalination–that process of removing salt from water to make it drinkable–has been used for thousands of years. One problem: Removing salt from seawater is less efficient than starting from freshwater, and significantly more expensive. When a country relies on desalination to get most of its water, it’s usually because it has a tremendous amount of oil money and no other good options. Costs are coming down, but gradually, and major desalination attempts remain prohibitively costly for much of the world. One of the grander attempts in recent history is the Beijiang Power and Desalination Plant, which has a price tag of $4.1 billion.

Ancient methods of desalination involved crude filters and capturing steam from boiling water, a practice which today has been improved on an industrial scale. But, again, the energy costs are enormous–it’s one thing for ancient sailors to boil water on a ship at sea to get them through the day, it’s another thing entirely to provide for the daily water needs of hundreds of thousands of city-dwelling people. Some desalination plants still start by boiling saltwater in a large chamber. Once that steam has lifted away from the salt, it is cooled at the top of the chamber and condenses, draining out into tanks for further filtration. Energy is required to both boil and cool the same water, making the whole process pretty inefficient. An alternative and more popular method for large-scale operations is reverse osmosis. In reverse osmosis, water is sent through filter after filter after filter at high pressure, hoping to remove more and more salt each time. Getting water through these filters is the most energy-intensive part of the process, and the thinner the filter, the less pressure you need.

Lockheed’s proposed desalination project filters through graphene, a material already touted as a modern marvel. A thousand times stronger than steel, it’s also just one atom thick. Last July, Popular Science covered its potential use in water filtration. Passing seawater over tiny pores, just one nanometer wide, the filter will let water molecules through, while blocking out the atoms that make salt. These filters are a much less energy-intensive option, and much better at filtration. Lockheed expects to have a prototype filter available by the end of 2013.