Creators Of Roomba To Sell A Telepresence Robot

Bad at directions? This robot can navigate a building on its own. 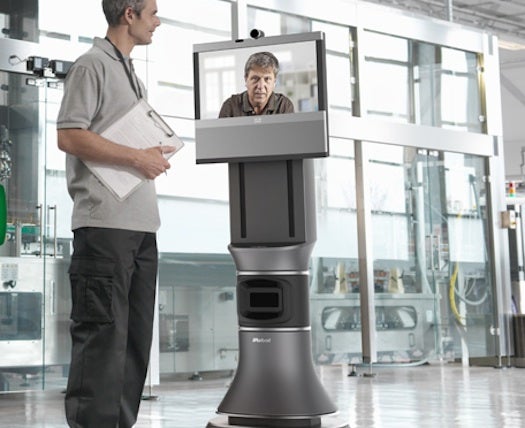 Massachusetts-based iRobot (the company that makes the Roomba!) announced today that it’s planning to sell a “telepresence” robot starting early next year.

The Ava 500 will show video feed from its user on a screen held atop a fat, 5’5″ column that rolls. At the same time, of course, the user sees everything the robot does through a webcam at the top of the screen.

Anybody who needs to call into a remote meeting uses an iPad app to schedule a meeting in whatever room he or she likes. When it’s time to meet, the app assigns the caller to an Ava 500 unit and the robot trundles its way to the right room, even if the user doesn’t know how to get there. Along the way, the robot detects obstacles—people, furniture, walls—and automatically avoids them. The user can also stop the robot to chat with people (or perhaps other robots) along the way.

The Ava 500 isn’t the first robot to feature a screen on top of a rolling column, made for workers or doctors to visit offices remotely. Popular Science looked at several rolling telepresence bots in January, when considering the best way to teleconference with Editor-in-Chief Jacob Ward. Double Robotics is a good example. The robot’s makers are shipping pre-orders right now.

Other models don’t have the same self-navigating abilities the Ava 500 has, however. Instead, users must drive the robots themselves. The Ava 500’s navigation and object-detection abilities come from iRobot, as you can imagine. After all, the Roomba, an autonomous vacuuming disc, must map rooms, furniture and any homebound cats while it works. The rest of the telepresence technology, such as the audio and video technology, comes from Cisco.

This article originally said Double Robotics was funded on Kickstarter. It is not; the company is venture-backed. I apologize for the error.