Everyday science, familiar plotlines, and an absence of jargon make this the most accessible Star Trek yet.

Star Trek is hardly beginner-friendly. Five television series, 12 movies, and a nerd following that defines nerd followings present a serious obstacle to the casual moviegoer. J.J. Abram’s 2009 reboot of the series was an attempt to make Star Trek more accessible, but it’s the second movie of the reboot, Into Darkness, where he succeeded. Here’s why (spoiler alert for much of what follows):

1. The opening sequence summarizes the entire original series.
In the first part of the movie, the crew of the USS Enterprise faces two major problems–an angry primitive alien world and an impending disaster–and manages to resolve those problems through hi-jinks, heroism, close calls, and technical ingenuity. That’s pretty much the narrative arc of the original series: there’s a mission with a new alien species, crew members go out of their way to protect it, break a few rules, and get into hijinks along the way. Into Darkness‘s opening sequence feels like a 30-minute standalone episode.

2. The plot is ripped from the headlines.
Set in 2259, Into Darkness revolves around a terror attack and the subsequent manhunt. The film also features a debate over the merits of targeted killing versus capture, and the tools that come into question–disguises, advanced missiles, etc.–all resemble the Global War on Terror. It could almost be called Star Trek Into Zero Darkness Thirty.

3. Explosions trump meetings.
It’s a cliche and a punchline that Star Trek is about people sitting around a table having important discussions. You won’t find any of that here. There’s exactly one meeting at a table in Into Darkness, and it’s interrupted by explosions. 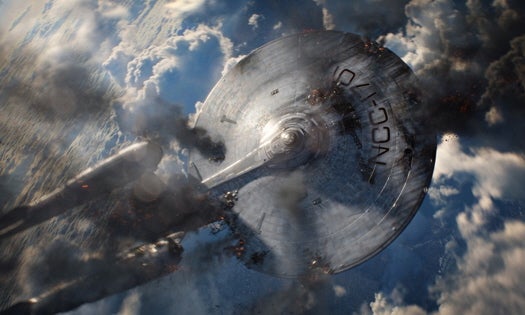 The Enterprise has seen better days

4. Space is the setting, not the plot.
There’s a tendency in space movies, especially the first Star Trek film, to be distracted by the setting–the enormity of space!–and to ignore that what matters to an audience is the people in that setting. Space certainly plays a part in Into Darkness, but it’s secondary to the (much more interesting) struggle between characters.

5. The aliens require no backstory.
Star Trek started out as as a TV show. And you know how TV shows go: Plots could drag out for years, especially a Star Trek plot. Into Darkness has no time for any of that.

When we meet the Klingons, we’re told that it is an empire, and it has tension with the Starfleet. And that’s it. There are no negotiations, no seminars on Klingon culture, no elaborate attempts at understanding their motive.

Similarly, the alien species in the opening sequence goes unnamed–its appearance tells us everything we need to know. The aliens visibly aren’t human, wear only loin clothes and their bows and arrows show they aren’t technologically advanced. That’s enough for a jaunt into the world, and Into Darkness doesn’t bog itself down with potentially distracting detail. 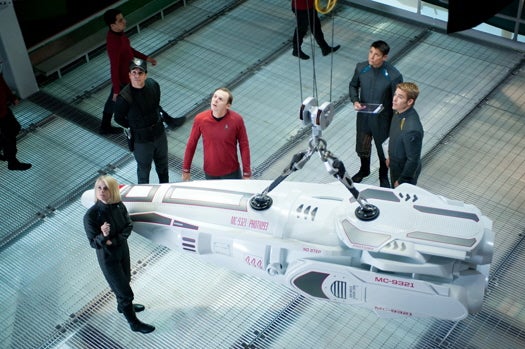 Experimental torpedo loaded onto the Enterprise

6. The weapons and other technologies should be familiar to anyone who doesn’t live under a rock.
In 2009’s Star Trek, there was an awkward play around continuity loops and time travel, resulting in a film as much about techno-magic as about the actual plot and characters. Previous iterations of the show and movies have predicted everything from mobile phones to automatically opening doors to personal diagnostic devices, making it years ahead of its time. While technology certainly plays a major part in Into Darkness, none of it is too unbelievable. Here are some of the film’s technologies have counterparts in the real world:

7. The bones thrown to Trekkies aren’t distracting.
For a franchise as established and and venerable as Star Trek, it’s almost impossible to make the film without including some references to earlier iterations of the series. When they happen in Into Darkness, they are very much background. For example, one of the villains has a history nestled deep in the canon of the universe, involving genetic engineering and a world war on earth. When the Original Series was made, that war was set in the 1990s; given that Into Darkness is set in 2259, it’s likely that the same war happened, but the dates in Into Darkness and the Original Series fail to match up precisely. That’s fine, the film doesn’t tie the plot down with an exact replication of Star Trek universe history. What matters is a villain with a past.

In fact, the whole of Into Darkness feels like a story free from the shackles of its past, content to use the trappings and touchstones but not bound by the crushing weight of its own history. Into Darkness ends with the same promise the show first offered: it’s a brand new universe. Let’s go exploring.