Laser Camera Makes 3-D Photos Of Objects A Kilometer Away

It can't quite handle bare flesh, though: not reflective enough. 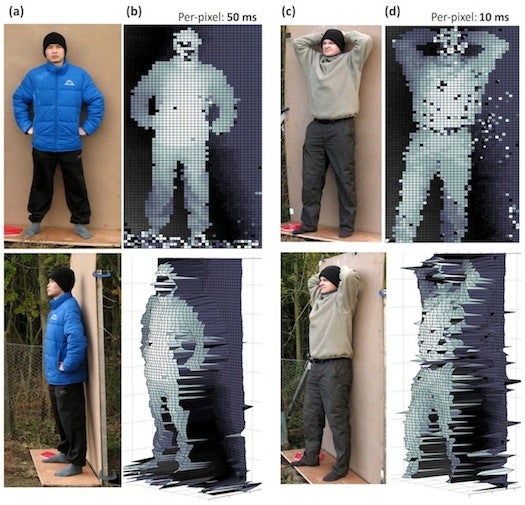 A team of physicists from Heriot-Watt University in Edinburgh has developed laser technology that can 3-D image an object up to a kilometer away. The system can accurately (within a millimeter) image even “uncooperative” objects — meaning those that don’t easily reflect laser pulses, like fabric. Though at a kilometer away, it can probably capture an uncooperative human, too.

The imaging technique is called “time-of-flight,” or ToF. It runs a low-power infrared laser beam over an object, preferably one that’s not moving, like a parked car, then records how long the photons in the laser beam take to bounce off the object and return to their laser-home.

ToF imaging systems are already used in some machine navigation, like autonomous vehicles, but generally they only have a short range and can’t image all surfaces. The Heriot-Watt team’s system specifically detects longer wavelengths of light that are redder than visible light and can travel more easily. A superconducting nanowire sensor counts individual photons in the laser beam, allowing it to more accurately record depth. 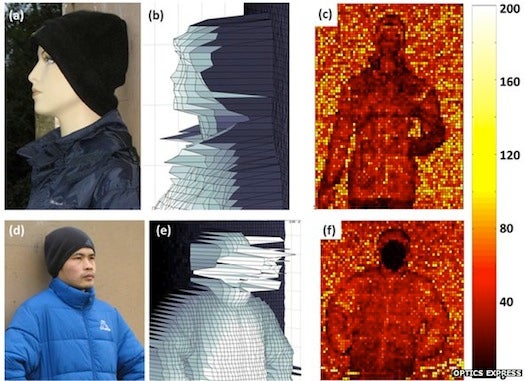 “It is clear that the system would have to be miniaturized and made more rugged, but we believe that a lightweight, fully portable scanning depth imager is possible and could be a product in less than five years,” according to Aongus McCarthy, the lead author on the paper in [Optics Express last week. He said in a press statement that it could ultimately have a range of up to 10 kilometers.

Gerald Buller, one of the study’s co-authors, told Wired that the technology could be used by the military to help drones see their targets. It could also scan vegetation to determine the health of plants in the forest, or be modified to work underwater to scan oceans and lakes for depth.

And for those who are a bit laser-shy: Human skin doesn’t reflect enough photons to be accurately imaged, so complete nudity should be your first defense.